WOW! Checkout 10 Records That Messi And Ronaldo Have In Common (No. 4 and 8 are out of this world!)

Cristiano Ronaldo and Lionel Messi, definitely two of the best footballers ever, both are record breakers. The contention about who rules between the two GOATs doesn’t appear to have an end as they continue pushing hard at being greater than they already are.

The two players have stayed over the rest of the other players for over 10 years and nobody has even come close to being as good as they are.

Messi and Ronaldo have set and broken such huge numbers of records that it has even become hard to keep track of them all. 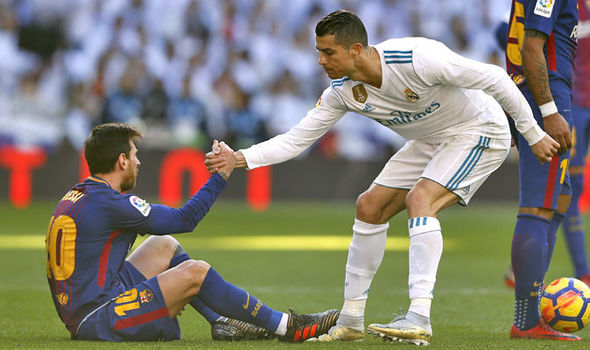 Nonetheless, while they drive themselves to be better and break more records, the two players are tied at a few records they themselves set.  Here are 10 records Messi and Ronaldo share. You’d really be amazed!

The two players at this time hold the largest counts of the ballon d’or. Messi received the award 4 times ina row until Ronaldo picked up and got his 5th in 2017

2. Most goals scored in the finals of the FIFA club world cup

The two GOAT’s  have scored four goals each in the finals of the FIFA club world cup.

3. Only players to have scored at three FIFA club world cups

4. Most appearances in Fifpro XI

They both hold the record  for most appearances in FIFA’s team of the year. Since 2007, they’ve had 12 appearances each.

5. Most hat-tricks in the Champions League

Both players have records for  8 hat-tricks each,  that’s right, both Ronaldo and Messi have recorded the most hat-tricks scored in the champions League.

6. Most hat-tricks in the group stage of the Champions League in a single season

These two amazing legends, scored two hat-tricks in the group stage of the Uefa Champions League in a single season. Ronaldo took the record in the 15/16 season while Messi equaled it in the 16/17 season.

7. First players to score 20+ goals for over eight consecutive seasons in La liga

Since the 09/10 La Liga season, both Ronaldo and Messi have consistently scored over 20 goals in a season.

8. Most league matches scored in a single season

Both Ronaldo and Messi have the record of most league matches scored in a single season, both are on 27 each

9. Most laliga hatricks in a season

Both Ronaldo and Messi hold the record of scoring the most hat-tricks, 8 each, in a season.

10. Most opponents scored in a season

both players hold the record of scoring against all 19 teams in a la liga season. Messi did his 2011/2012 record setting 50-goal season, while Ronaldo achieved his in the 2014/15 season.

#10 Records That Messi And Ronaldo Have In Common2Christiano RonaldoLionel Messi