Nigerian economist and billionaire Mr Tony Onyemaechi Elumelu isn’t publicly known as a politician, though his brother, Ndudi, is the present Minority Leader in the House of Representatives.

The billionaire shared a photo a video clip where he was on sampling spree of roasted corn a highway with the caption, “Jollof is nice but some days we sample roasted corn along the Lagos express… Some cravings die-hard TOEWay #roastedcorn #cornlove #jollofwars #streetfood.”

At the time of this report, the video had garnered more than 100, 000 views, more than 5, 000 comments, with most of his followers asking: Is Billionaire Elumelu warming up for 2023 election?

“Beyond whatever political permutation, I think he likes roasted corn. Saw a pix of him in his Private Jet eating same. But then, won’t he make a good President?” Otunba Tope Oyefeso said.

Hes a politician na. He can buy corn in public and eat corn on the cob in private.

According to one of his followers, “Nothing is special” about what the chairman of Heirs Holdings, the United Bank for Africa. But sampling roasted corn is synonymous with Nigerian politicians ahead of elections.

At least we will have a visionary candidate for the highest office, an intelligent one who knows about how the economy works. 🤔

More than 10 Nigerian politicians had stopped done unusual things in the past. For instance, former Vice President and PDP presidential candidate in the 2019 poll Alhaji Atiku Abubakar was seen before the election eating rice with school pupils. He abandoned his specially treated table water by opting for “pure water” (sachet water drunk by the Nigerian masses).

In July 2016, the former Ekiti State Governor Ayodele Fayose halted his convoy to purchase boiled corn, using the opportunity to interact with the sellers and other locals along Iju/Itaogbolu road.

Okorocha reportedly stopped his long convoy to buy roasted corn and pear from a street trader in Owerri. 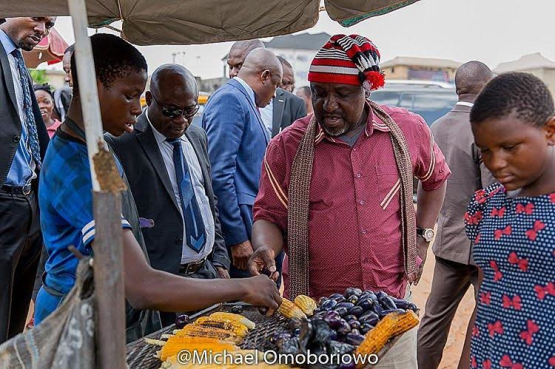 Others include Governor Samuel Ortom, former Lagos State Governor Babatunde Fashola among others.

However, Tony Elumelu, who has empowered thousands of African young entrepreneurs through his foundation isn’t the only Nigerian who doesn’t hold an elective office to associate with local sellers on the street.

He was holding one already, meaning he already checked with a seller and didn't find it sweet enough, bought it and sent his guys to check fresh ones in advance. Same way he told that guy to go ahead and check further for better ones. That's the way I see it.

An award-winning writer Chimamanda Ngozi Adichie in early August 2019 reportedly shared a photo of herself buying corn and pear by the roadside in Abba, Anambra State.

It may be presumptive to relate the action of the billionaire to politics, but considering the interest of his brother Ndudi in Nigeria’s political space and his own interest in the economy, 2023 may produce a shocker.