A chieftain of the People’s Democratic Party (PDP) who is also an ex-Minister of Aviation in the country, Femi Fani-Kayode, has just given his reaction to a statement which the governor of Kaduna State, Nasir El-Rufai, was credited with over the weekend.

The Kaduna State Governor as he spoke on Saturday, July 6, 2019, at the Northern Youth Summit which was organised by the Northern Hibiscus Initiative in the state, stated that Northern Nigeria might be the most uneducated and backward region in the country, he was proud to say that Nigerians from the Northern part of the country were hardly placed on arrest for committing internet fraud, popularly known as ‘Yahoo Yahoo’, as well as other financial crimes.

“We have to speak the truth to ourselves and ask why is it that northern Nigeria has development indicators similar to Afghanistan, a country still at war?

“We are being considered as the parasite of the federal economy, even though, that is not entirely true. Because northern Nigeria still feeds the nation.

“The richest business man in Nigeria is still Aliko Dangote, not someone from Southern Nigeria, thank God for that.

“We are generally considered to be more honest and less corrupt than other Nigerians. That is something we should be proud of’,” El-Rufai had said.

Femi Fani-Kayode however, disagreed with Governor El-Rufai and called him out as he held that Nigerians from the Northern parts of the country have actually looted more funds from the country’s purse than any other group in Nigeria. 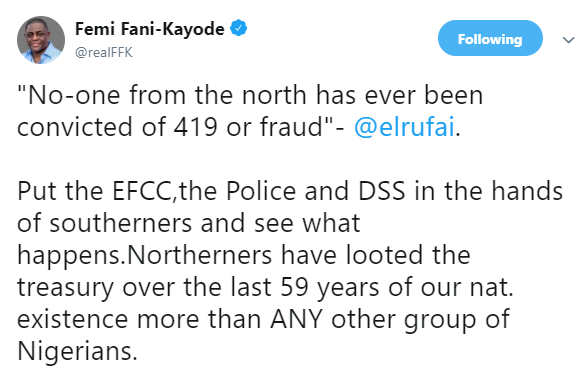 What are your thoughts on this story? Kindly let us know in the comment section below.