Senate Presidency: Why Ndume Lost Out To Lawan

The Inauguration of the 9th Assembly has finally been done with Senator Ahmed Lawan emerging as the Senate President.

It was a contest which had piqued the interest of Nigerians due to the unfolding drama that had played out leading to the emergence of Lawan as Senate President.

The race had been one attached with controversy almost from the very beginning as almost immediately after the 2019 elections, the National Chairman of the APC, in a meeting with the President and National Assembly-elect, had announced that Senator Ahmed Lawan and Hon. Femi Gbajabiamila as the choice of the party for the position of Senate President and Speaker of the House of Reps respectively.

This did not go down well with certain members of the ruling party as they had plans to contest for these positions as well, hence the drama began.

Then there was the opposition Peoples Democratic Party (PDP), who had said they might just produce their own candidate to run for the seat, even though they were a minority.

At a point however, the PDP were said to be eying a Senator on the platform of the APC who was once its member, Senator Danjuma Goje. Goje was interested in the polls with indications pointing to the fact that he may win as he was a staunch loyalist of former Senate President Bukola Saraki, and had massive support across political divides.

At the last minute however, President Muhammadu Buhari held talks with Goje, which saw him dropping his bid and declaring his support for Lawan.

After this very deft move by President Buhari unsettled the PDP as their plans were shattered, they decided to go back to the drawing board.

It was even reported in some sections of the media that the PDP had chosen to work with Lawan, with the hope that Senator Ike Ekweremadu will be made the Deputy Senate President. Plans were however changed once again as on the day of the inauguration of the 9th Senate, the PDP made a U-turn and instead announced its support for Senator Ali Ndume and Hon. Bago for House of Reps, going in stark opposition to the position of the ruling APC. 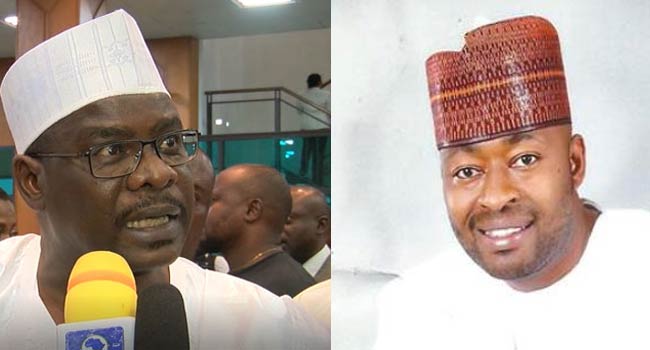 Thus the stage was set for a very interesting National Assembly inauguration, especially that of the Senate.

After the clerk of the National Assembly, Mohammed Sanni-Omolori, had made a roll call of all Senator-elects, the motion to nominate Sen Lawan for position of Senate President was moved by Senator Yahaya Abdullahi from Kebbi State, while Senator Solomon Olamilekan (Yayi) seconded the motion. They were both of the All Progressives Congress (APC).

The motion to nominate Senator Ndume for the Senate Presidency was moved by Elisha Ishaku Abbo from Adamawa State who is a member of the Peoples Democratic Party (PDP).

There was a slight rancour on the floor of the Senate over the choice of voting system after the Clerk of the National Assembly, Mohammed Sanni-Omolori, announced that secret ballot method will be used for the polls as supporters of Senator Lawan protested the move.

However, the clerk of the National Assembly Sanni-Omolori had said that they would have to wait until after the elections before they could make any move.

Results Of The Election

After the polls were completed, the candidate who was earlier nominated by the All Progressives Congress (APC), Senator Ahmed Lawan emerged victorious. He had defeated the candidate which the opposition People’s Democratic Party (PDP) had chosen to give their support, Senator Ali Ndume.

Out of the total 107 votes which were cast, Lawan got 79 votes while Ndume could only manage 28 votes. After the results were announced, Senator Ndume walked up to Senator Lawan to congratulate him on his victory with a handshake.

Senator Ahmed Lawan will with his victory finally give the ruling APC a chance to work with an “agreeable” Senate President. This is because, the President had earlier blamed the past leadership of the National Assembly for being a clog in the wheel of the success of administration, accusing Senate President and Speaker of the HOR, Bukola Saraki and Yakubu Dogara of putting their egos above National interest.

It is quite surprising that Lawan won with a landslide as permutations before the election in many quarters was that it was going to be a tight contest, especially after the PDP on the morning of the poll announced that it was supporting the Ndume and had directed its 44 members to vote for Lawan.

Lawan however seemed to be a very popular member of he Senate as he got votes of both parties to emerge the Senate President. His likable personality must have gone a long way in making members of the PDP, who are usually very united and compliant with Party directives to go against the wishes of the party.

Ali Ndume had come around to have the personality of one who was very stubborn as he had refused to step down for Senator Lawan even with the intervention of the Vice President, Prof Yemi Osinbajo.

Ndume had said no one could make him step down for Lawan as he had informed the top party echelon of his ambition before embarking on his mission with no one telling him otherwise.

What seemed to have worked against Ndume was that he had come across to some as obstinate and maybe hard-hearted. Ndume was one of the Senators who had proved to be a thorn in the flesh of former President, Bukola Saraki and was placed on suspension for six months by the Senate.

He was suspended after he made allegations against the then Senate President Bukola Saraki, of purchasing Armored SUV vehicles using fake Custom papers.

Ndume had further alleged that fellow Senator in the 8th Senate, Dino Melaye from Kogi was not a bonfide graduate of Ahmadu Bello University (ABU), Zaria. Both claims were found not to be true at the end of the day.

These actions had left a bitter taste in the mouth of PDP and APC senators who were loyalists of former Senate President Bukola Saraki.

That may have been a major reason why Ndume lost out at the end of the day even though the Peoples Democratic Party (PDP), had chosen him as their candidate for the position of Senate President.

After all the intrigues and change in tactics from both parties, at the end of everything, a new Senate President has emerged.

Will he have a successful four year tenure as the number 3 citizen in the country? Time will tell.

Let us know what your thoughts are on this article with your comments in the section below.