In a swift move to put an end to the ongoing investigation of the embattled Imo State, Governor, Owelle Rochas, he has requested an ex parte order to stop probe. However,  the renowned anti-graft agency, EFCC, has implored the Apex National Judicial Council (NJC) and the Chief Judge of the Federal High court, Justice Abdul Kafarati, to review the conduct of the trial judge, Justice Taiwo O. Taiwo. 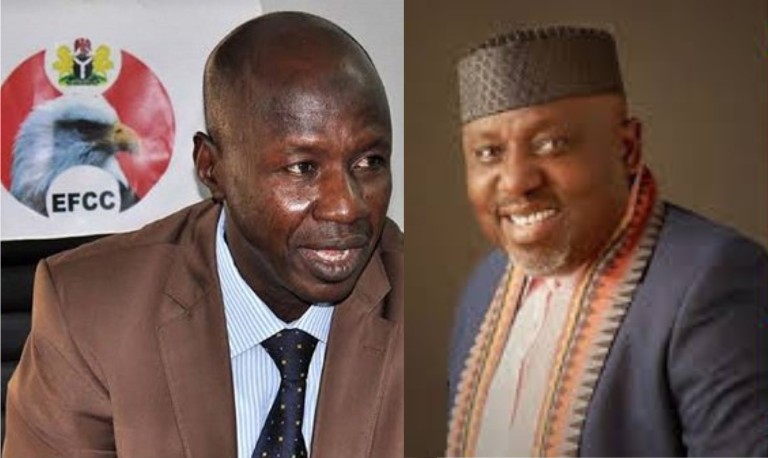 On the premise that, Justice Taiwo had granted a similar order staying action on the investigation of the Senate President Bukola Saraki. Following an ex parte order stopping the ongoing investigation of the Governor of Imo State, Owelle Rochas, the Economic and Financial Crimes (EFCC) has petitioned the National Judicial Council (NJC) and the Chief Judge of the Federal High Court Justice Abdul Kafarati.

You may recall that, Senator Saraki’s counsel, Sunday Onubi, before Justice Taiwo has coincidentally appeared for Okorocha to secure a similar ex-parte order. It was revealed that the most indicted societal echelons, including former Ekiti Governor, Mr. Ayo Fayose, who also obtained an order to delay his trial.

No fewer than six top officials of the state, including the Accountant-General of Imo State, Mr. Uzoho Casmir had been interrogated by the EFCC.

Casmir was before his appointment, a Director of Finance in Okorocha’s administration.

Okorocha rushed to the Federal High Court, seeking a restraining order against the Attorney- General of the Federation (AGF), the Inspector-General of Police (IGP), the State Security Services (SSS), the Economic and Financial Crimes Commission (EFCC), the Independent Corrupt Practices & Other Related Offences Commission (ICPC) and the Code of Conduct Bureau.

But on May 8, 2019, the judge asked the EFCC to stay action on Okorocha’s probe, pending the hearing of his motion on notice.

The order reads in part:  ”Upon this motion Ex-parte dated and filed on the 30th day of April, 2019 praying for the following reliefs:

“An order directing the respondents by themselves, their servants, agents, privies or officers to stay all action in connection with the subject matter of this suit pending the hearing and determination of the Originating Motion on notice.

”And for such further or other orders as this honourable court may deem fit to make in the circumstances.

”Upon reading the affidavit in support of the motion ex-parte deposed to by Owelle Rochas Okorocha, male, Nigeria citizen of Imo State Liaison Office Abuja and filed at the court registry.

“And after hearing Sunday Onubi Esq., for the Applicant move in terms of motion paper. It is hereby ordered as follows:

“That an order is hereby made directing the respondents by themselves, their servants, agents, privies or officers to stay action in connection with the subject matter of this suit pending the hearing and determination of the Originating Motion on notice.

”That the respondents shall be served and they shall respond to the originating motion on notice if they so wish within five days of the service on them of the originating processes and the order of this court in compliance with the rules.”

The EFCC, however, picked holes in the decision of the judge to grant an ex-parte order to Okorocha, Saraki and Fayose.

A source said: “The EFCC has decided to protest to the NJC and the Chief Judge of the Federal High Court to review the conduct of the judge, especially alleged abuse of ex-parte order.

“The EFCC is kicking against the conduct of Justice Taiwo O. Taiwo granting ex parte orders restraining the Economic and Financial Crimes Commission (EFCC) from performing its statutory functions.

“We believe the order of Justice Taiwo O. Taiwo was seeking to abort a process that had started. It is really unfortunate that Okorocha, who is enjoying constitutional immunity, will still go to the Federal High Court to halt his investigation.

”We believe it is a well-established legal principle that no court has the power to stop the investigative powers of the EFCC or any agency established under the laws to investigate crimes.

“The EFCC is also of the opinion that the conduct of His Lordship, Hon. Justice Taiwo O. Taiwo is contrary to Rule 3.5 of the Revised Code of Conduct for Judicial Officers of the Federal Republic of Nigeria which states that a Judicial Officer must avoid the power of issuing interim injunctions, ex parte.” The source said the EFCC was worried that Saraki and Fayose had enjoyed the same ex-parte comfort from the judge.