Muhammadu Buhari may have won re-election as Nigeria’s president but he faces a daunting list of present and long-term challenges over the next four years.

“The hard work to build a better Nigeria continues,” he said in an acceptance speech on Wednesday.

The tasks ahead remain broadly the ones he faced when he was first elected in 2015.

Insecurity – Buhari was first elected on a promise to defeat Boko Haram and he immediately made significant gains in degrading the Islamist militants. By the end of 2015, he was confident enough to declare the jihadists were “technically defeated” but there have been increasing attacks by the group’s IS-backed faction. Reinvigorating the military after several set-backs and depleted morale will be a key priority.

The insurgency has killed more than 27,000 people and left 1.8 million homeless in northeast Nigeria since it began in 2009, creating a humanitarian crisis. A government reconstruction effort has attempted to build new homes and local amenities, resurrecting towns from which thousands have fled. But NGOs have warned that many areas deemed safe for return remain insecure and that returning residents are still heavily reliant on humanitarian aid.

Diversifying an oil-dependent economy was a stated priority in Buhari’s first term and saw attempts to boost agriculture and manufacturing. But Africa’s biggest oil producer remains heavily reliant on crude, which accounts for about 90 per cent of foreign earnings and 70 per cent of government revenue. Nigeria pumps about 1.78 million barrels of oil a day, with 240,000 barrels produced by the state oil company, the Nigerian National Petroleum Corporation (NNPC).

Oil wealth, though, has still not translated to prosperity for most Nigerians. GDP per capita income fell from $264 to $250 between 1970 and 1999, despite an estimated $230 billion in oil revenue in that time.

Buhari could do little about the global slump in oil prices that contributed to a 15-month recession in 2016, which saw millions of job losses and inflation soar to 18 per cent. The economy is recovering slowly: last year there was a 1.8 per cent growth in GDP, and inflation fell to 11.3 per cent in January 2019.

Yet government statistics indicate that 43.3 per cent of the country is unemployed or underemployed — a bleak prospect for a country of 190 million where the average age is just 18.

Buhari’s growth target of 3.0 per cent in 2019 is barely more than the rate of expansion of Nigeria’s population, which effectively means the country is running to stand still.

In 2050, the UN projects Nigeria will be the third most populous nation in the world with 410 million people. Last year, Nigeria replaced India as the country with the largest number of people — 87 million — living in extreme poverty, on less than $1.90 a day. 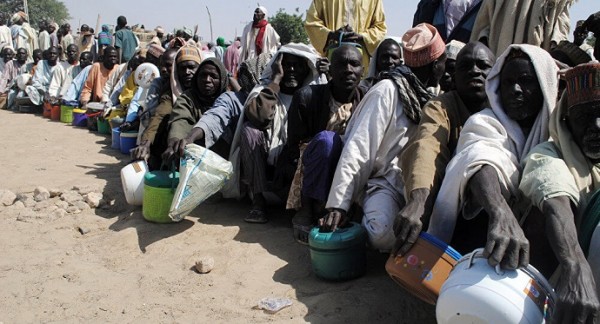 The Brookings Institution estimates that number is growing by six people a day, meaning a faster rate of growth is vital to stop the trend. Social welfare programmes provide monthly cash transfers of 50,000 naira ($140, 120 euros) to the poorest 300,000 Nigerians and 30,000 naira to those on a government training scheme. Buhari has pledged to expand these programmes and create millions of jobs through investment in innovation and technology.

Improvements are needed, too, in the business environment: Nigeria rose 24 places to 146 on the World Bank’s Ease of Doing Business Index. But the ranking is low for a country of Nigeria’s size and reflects largely unaddressed government bureaucracy, as well as inadequate infrastructure and poor electricity provision. Power generation has risen to 7,000 megawatts, the government says, but that is still about 7.5 times lower than South Africa, which has about a quarter of Nigeria’s population.

Corruption – Buhari is unusual in Nigerian politics as a leader who does not appear to have amassed personal wealth from his time in high office — and his personal integrity is a selling point. “Leave a naira on the table with Buhari in the room, you will find the naira on the table when you return,” the leader of the ruling All Progressives Congress, Bola Tinubu, has said. The government says it has recovered 7.8 billion naira of stolen public funds. But the money, as Britain’s Times newspaper observed this week, is “the equivalent of pennies under the couch” compared to the total amount of looted cash.