100 villages have been captured, taken over by Fulani militia – Southern Kaduna people

The Southern Kaduna Peoples Union, SOKAPU, has cried out against the continuous attacks on its people by suspected Fulani militias, resulting in the loss of several lives.

The forum in a statement issued by its spokesman, Luka Binniyat, said that Adara natives of Kallah ward, Kajuru LGA of Kaduna State witnessed another tragedy where Mr Kaduna Garba, 32, father of two children, who left the IDPs camp in Kallah town with his kinsman, Francis Bala, 38, and heading for their native Magunguna village to see the situation of things, among 18 other Adara communities were ambushed.

The statement further explained that the two men were ambushed and attacked just before getting to the village by armed Fulani with daggers and machetes, saying that Kaduna Garba was instantly killed while Francis Bala escaped with fatal injuries.

In the same vein, the statement said Irmiya Bitrus, 20, from Kwakwa village, in Atyap Chiefdom, Zangon Kataf local government area was also attacked by suspected Fulani militias who inflicted grievous injuries on him, saying that he is at a private hospital in Zoknwa receiving treatment.

The statement noted that armed Fulani men attacked two Gbagyi men riding on a bike on the Buruku-Damba-Kasaya road in Kunai ward, Chikun local government area where Mr. Ezra Nayaro, 45 and father of 7 children was gunned dead while the other passenger escaped into the bush.

The statement expressed its concern on how some Southern communities are now fully occupied by armed Fulani militia some for over a year, stating that the Governor of Kaduna State, Mallam Nasir el-Rufai is still in denial that such reprehensible truth doesn’t exist.

SOKAPU said that there are proofs that the villages below are now captured and occupied by armed Fulani militia.

The statement explained that as at 30th October, 2020, at least 100 communities scattered in four local government areas of Southern Kaduna have been displaced and taken over by armed Fulani militia unchallenged by the state even after repeated publication of what the statement described as “the impunity” to the government.

It said that there are at least 50,000 IDPs living in several camps in Southern Kaduna and with relations, saying that their villages are either too unsafe to return or have been taken over by Fulani militia.

The union called on the International Community, human rights organizations, men and women of honor and conscience to help mount pressure on Kaduna State and the federal governments to restore these people back to their homes. 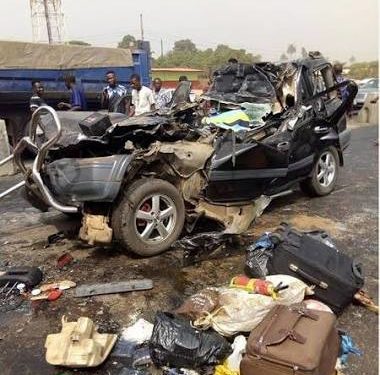 Three persons died in an auto accident at Lotto, opposite NNPC Filling Station on the Lagos-Ibadan Expressway, according to the Ogun State Traffic Compliance and Enforcement Corps (TRACE).

One person also sustained injuries in the accident which involved two vehicles, the Mowe/Ibafo Area Commander of TRACE,Mr. Olusola Ojuoro, told the News Agency of Nigeria (NAN) in Ota, Ogun.

The accident happened at about 8.45 a.m.

Ojuoro said that an Iveco truck with registration number AAB 458 ZY was inbound Lagos when it lost control due to brake failure and crushed a Mazda bus marked XY 660 EKY.

“The corpses of the victims have been deposited at Idera Hospital Morgue, Ogun, while the survivor was taken to an undisclosed hospital by his relative,” he said.

He urged them to ensure that their vehicles were in good condition before putting them on the road to avoid unnecessary loss of life.

Ojuoro also commiserated with the families of those that lost their lives and prayed to God to grant them the fortitude to bear the losses.