Unlike what most youths in Nigeria think that the way to succeed is to run away from the country by any means, first-hand information from returnees demystifies this notion. Thousands if not millions of Nigerians have continued to ply the Mediterranean route in a bid to escape what they consider poverty to become rich and live comfortably.

The pull and push factor ahead and behind this is a resounding “get rich quick mentality among Nigerians.” Most of our youths leave their country out of desperation and craving for a life made on a bed of roses. The unfortunate thing is that there is no such life anywhere in the world. Nigerians who travel to Libya hopefully want to end up in a developed European country. The top on the list has been Spain, followed closely by Austria or neighbouring Germany. People in these countries have worked so hard to take their nation to the level where they are today. Nigerians, as blessed and as endowed as the country have continued to fail to face their challenges. This is why thousands of Nigerian youths have continued to meet their Waterloo on their way as they have walked through the wilderness without God or Moses.

One of the returnees, Harrison Okotie, said he was really thankful that he had left his completely miserable life as an immigrant in Libya. Describing the condition in which they were kept there, he said that there was nothing good about how they were treated.

He said that they spent several days and even months without taking their baths and the officials who came in the guise of protecting their interest ended up exploiting and maltreating them even more. He said he lacked adjectives to qualify the wickedness of the Libyans and the conditions were so adverse that some persons ran mad. His left eye had been battered by an Arabian official according to him.

Another Nigerian, Ikechukwu lamented the poor feeding. “We got as little as a spoon of food per day. We do not even know when we are going to get the next meal.” He said that they spent weeks and sometimes months without taking their baths or brushing their teeth. 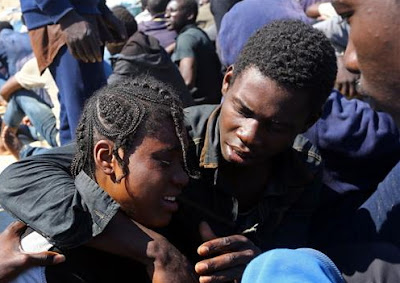 Also, Ada Chijoke another returnee said that it was better to practice the crudest subsistence farming in Nigeria than to go through any route as an immigrant. She said they were locked up in one place where they urinated, defecated and did not take their bath or eat.

To sum it all, Nigerians should understand that there are no shortcuts to real and lasting success and that the solutions to their problems still lies within the borders of this country. Countries in Europe and Asia even have more challenges than we do. They have only been able to face it, and that is what we ought to do.