La Liga champions Barcelona suffered a defeat in their opening match of the new season when they travelled to the San Mames to play against Athletic Bilbao on Friday night. Spanish striker, Artiz Adruiz scored a bicycle-kick in the dying moments of the game to hand Bilbao a 1-0 win over Barca who were without Lionel Messi.

Speaking to reporters at the end of the game, Aritz Aduriz said he will always be available to help Bilbao until the last day of his career. The 38-year old star plans to retire at season’s end but showed he still has plenty of football left in the tank thanks to his unforgettable 89th-minute winner on Friday.

The Spanish striker has been with Athletic Bilbao since 2012 and has scored 172 goals in 391 games. He was introduced very late in the second half in the La Liga clash on Friday and scored within a minute of being on the pitch via a spectacular overhead kick against the La Liga champions at San Mames.

Aduriz’s goal saw him match a Lionel Messi scoring feat, having now scored in 15 consecutive seasons in Spain’s top flight, and the veteran striker revelled in the result.

“The team has been amazing,” Aduriz told reporters at the end of the game. “There is no better way to start than by adding three points against Barca.

“I said I was going to be there to help Athletic until the last day and today I have been able to prove it. The atmosphere of San Mames is always insurmountable, but it is true that today people have taken this game even more eagerly,” the striker revealed.

Bilbao had a strong finish to the 2018/19 La Liga season as they finished in 8th position despite having a poor start. Adruiz believes that the win over Barca would inspire the squad to do even better this term. 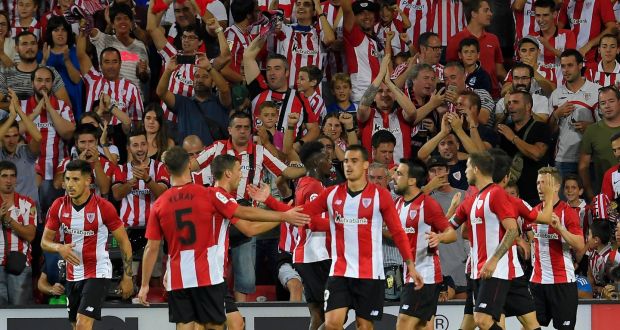 “Athletic’s base is young people. You have to give them confidence and go slowly with them. They will help us a lot throughout the year.”

The striker also revealed his joy for his spectacular finish. He said: “Dedicated to my family and everyone who supports me,” Aduriz said of the goal.

“These kind of things make football so beautiful. Everything in life has a start and a finish. I’m grateful to be able to choose to end things where I’m happiest.”