The Elephants of Cote d’Ivoire secured a narrow victory over the Bafana Bafana of South Africa in their Group D opener at the ongoing Africa Cup of Nations in Egypt. Jonathan Kodija scored by putting the ball between the legs of the South African goalkeeper after the hour mark to ensure that all three points went to the 2015 AFCON champions. The Ivorians were exciting in attack and the scoreline does not reflect the state of play because of the outstanding saves made by Ronwen Williams who was in goal for the Bafana Bafana. Daily Advent x-rayed the match and here are five things we learnt from the game.

Cote d’Ivoire can be punished with simple tactics

One of the first things that every team must do is learn how to defend set-pieces. While the Elephants of Cote d’Ivoire are a very good side as today’s win proves, they have serious problems dealing with corner kicks and set-pieces around the box. For some reason, Bafana Bafana looked like scoring from every corner kick as the Ivorians could not contain them in the box. With the quality that they have in attack, it would be a shame to miss out on the AFCON title because of an issue as basic as defending set-pieces. This is something that Ibrahima Kamara should be worried about because they are one of the favourites to win this edition of the tournament. “Weaker” teams tend to sit-back, counter and maximize set-pieces when they face stronger teams and this could be a big problem for the 2015 champions going forward.

South African talent, Percy Tau was one of the biggest stars to watch going into the tournament. However the former PSL Player of the year would want to put the memories of today’s game behind him. The flashes of brilliance that fans were treated to by the Brighton man were missing against the Elephants of Cote d’Ivoire. The entire South African attack looked docile and blunt in front of goal but more blame should be put on Tau who is widely regarded as the most important member of that department. If the Bafana Bafana aim to get more out of this competition and reach the final four at least, they need Tau at his best level of football. He scored 4 goals in the qualifying phases and a repeat of the same feat would go a long way in restoring the pride of the Bafana Bafana. Water break seems to be a joke from CAF

Ahead of the start of this edition of AFCON, CAF confirmed that there would be water breaks in each half of every game. However, there was no water break in this particular fixture despite the fact that it was played in the blazing sun of a hot Egyptian afternoon. The temperature at the time of the game was about 37 degrees but the referee did not stop the game in the first half to allow the players hydrate and cool off.

Are water breaks not mandatory or the players need to request the break from the referee if they feel the need for it. This game ( and some previous games in the ongoing tournament) has raised some questions over the planning of the tournament. CAF should explain to the fans and players what to expect going forward. I mean, if water breaks are not consistent, how can we trust the use of the VAR in the latter stages of the competition. 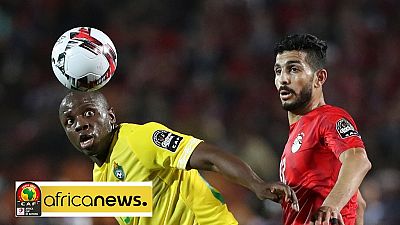 Egyptians need to do better for the good of African football.

The game was highly anticipated ahead of kick-off because of the strength of the two teams, they are two of the biggest sides at the tournament. However, there was a relatively low turnout of fans at the stadium and the atmosphere was not as electric as it should have been. While the stadium in Cairo was almost filled to the brim on Friday night, it can be assumed that this was so because the hosts were in action.

This is a situation that has plagued the previous editions of AFCON where citizens of the host nation turn out in huge numbers for their games and stadiums are bare when other teams play. What should the fans expect if and when the hosts get knocked out early on at the tournament? The local organizing committee of the tournament should encourage fans to come out in huge numbers to support African football and not just the Pharaohs of Egypt. For some reason, the South African players could not stay close to their Ivorian counterparts. From the first few minutes of the game, the skilful players from Cote d’Ivoire ran at the South African defenders teasing them with tricks and flick to the delight of their own fans. The pace and speed of the wing backs combined with the strength and skills of the attackers were too much for the South Africans to handle as they tumbled and fell over in one on one situations. With Wilfred Zaha on the bench in the first half, it would have been criminal to unleash the Premier League attacker on the shaky South African defence. Perhaps the Bafana Bafana were intimidated by the “Big Stars” within the Ivorian ranks or they are not used to marking skilful attackers who love to dribble. Stuart Baxter would need to do a lot of work to ensure that his players do not play the next game as if the turf is slippery or they need spikes instead of studs.