It was another night of sorrow and pain for Barcelona followers all around the globe, as their darling club failed to mend their broken bridges in the Copa del Rey final against Valencia. The Catalans fell to a 2-1 defeat at the hands of the Los Che at the Benito Villamarín, Seville. This defeat as therefore put Lionel Messi’s chances of winning his sixth Ballon d’or into shambles as questions will be asked on where is individual brilliance have led his team to.

For the first time in five years, Barcelona lost in the finals of their favourite competition. The Blaugrana are the most successful club in the competition with a total number of 30 titles compared to Athletic Bilbao and their bitter rivals Real Madrid who both have 23 and 19 titles respectively. Few weeks ago, the Catalans were bundled out of the UEFA Champions League by English Premier League giants Liverpool, in the semifinal stage after taking a three-goal advantage into the second leg of the encounter. With all hope lost for most Merseyside reds fans ahead of the second leg in Anfield, Jurgen Klopp’s men made a historic comeback with a 4-0 win to qualify for the finals.

Barcelona switched their focus to the Spanish La Liga (which they eventually won) and the Copa del Rey but they failed to make their fans happy after a heartbreaking ouster in the Champions League.

The Catalans were clear favourites to win the cup finals, but Kevin Gameiro and Rodrigo made sure that Valencia added more misery to Barcelona’s current situation even with Messi on the pitch.

Here in this article, we try to analyse who should be at the ‘centre of criticism’ for Barcelona’s current awful performance particularly in their 2-1 loss to Valencia and how it has affected Messi’s chances of winning the Ballon d’or this season.

Josep Maria Bartomeu: He is turning out to be one of the worst President in Barcelona’s history as his decision on recruitment have been worse compared to his predecessors. His tenure has been marred with poor transfer, getting players who are not of Barcelona’s standard and ignoring the core value of the club known for years which is depending on the La Masia for new talents for the first team. 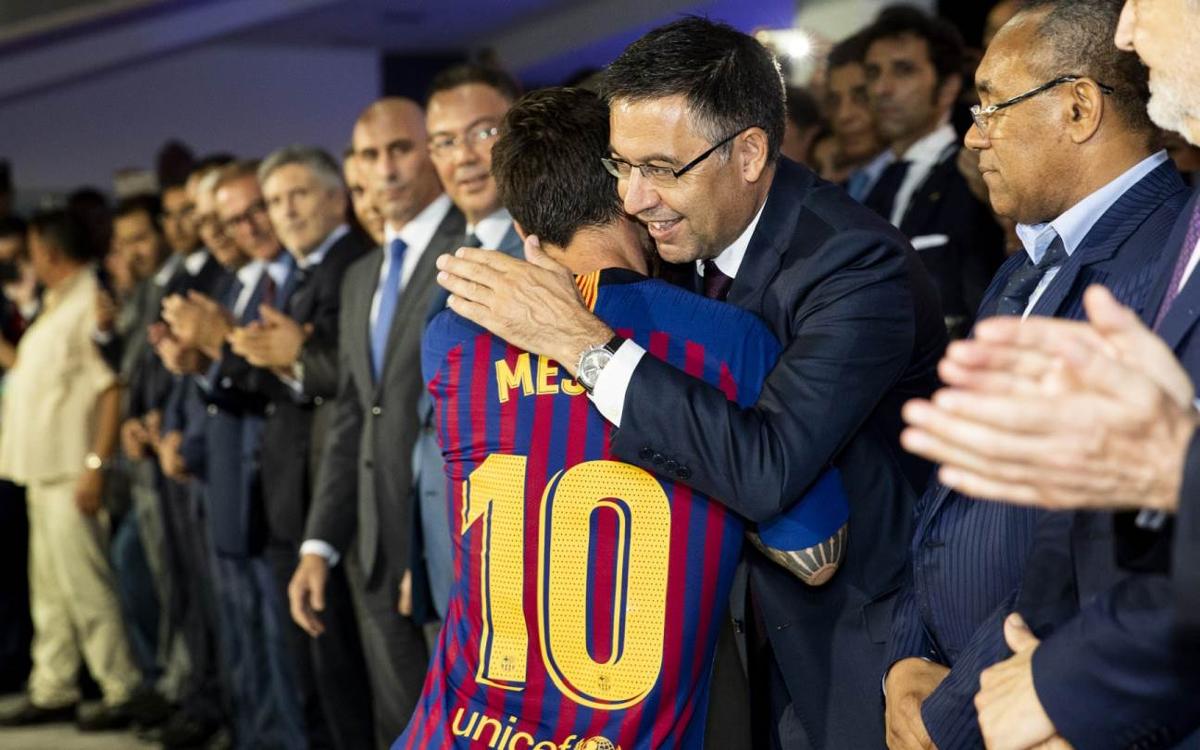 Barcelona have gone on to be a buying club, as they now invest more in buying players rather than promoting players from the academy into the first team, something they’ve benefitted from for years and gave birth to the likes of Messi, Iniesta, Xavi, Puyol, Pique, Sergio Busquets to mention a few.

He has failed to bring in players who could help the Argentine forward to claim the World best player yet again. With the likes of Iniesta and Xavi gone, Messi has found it difficult to link up with the new set of players who don’t really understand the core standard of Barcelona’s play. 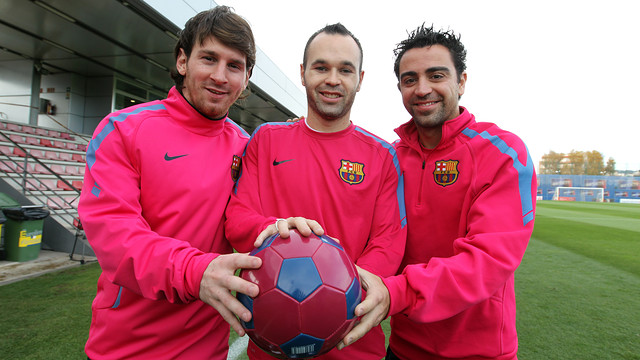 Ernesto Valverde: A lot of Barcelona fans will want to hold the Spanish gaffer responsible for the current situation of the squad, as his team have shown to be reliant on a certain pattern of playing through only Lionel Messi. 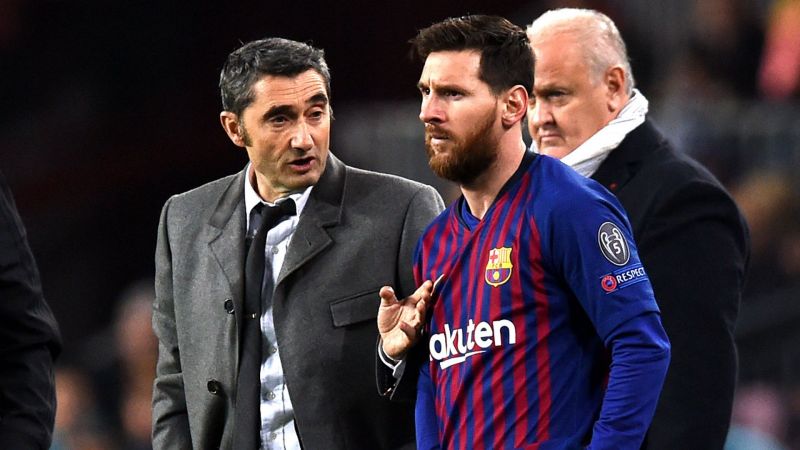 It is quite obvious that Barcelona games in recent years have been built around the Argentine wizard, but it is different now that Barcelona now have only him to look up to in terms of goals, assists, creating goal scoring chances e.t.c. The former Athletic Bilbao manager made it obvious to the opposition when he publicly said they are reliant on Messi’s brilliance in a recent interview. 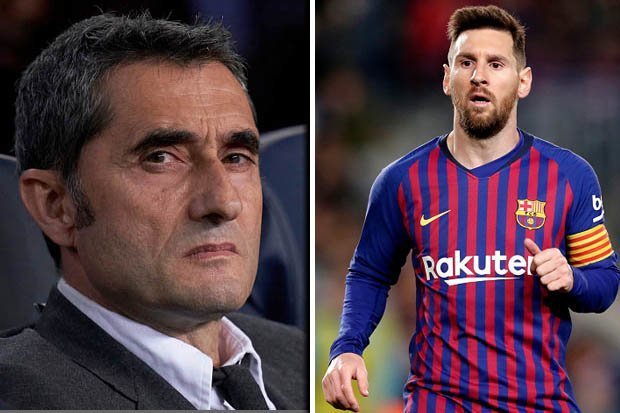 “Of course there is Messi dependence,” Valverde told a press conference after Barcelona’s 4-4 draw against Villarreal. “It would exist in any team in the world, but when he is not there we also have to play and try to win. “Leo is fundamental for us and marks the style, it is well known that he is the best in the world for something.” His lack of twisting the game around when the plan of waiting on Messi’s genius fails has shown that he is a coach who lacks the idea of turning around games without the club captain. 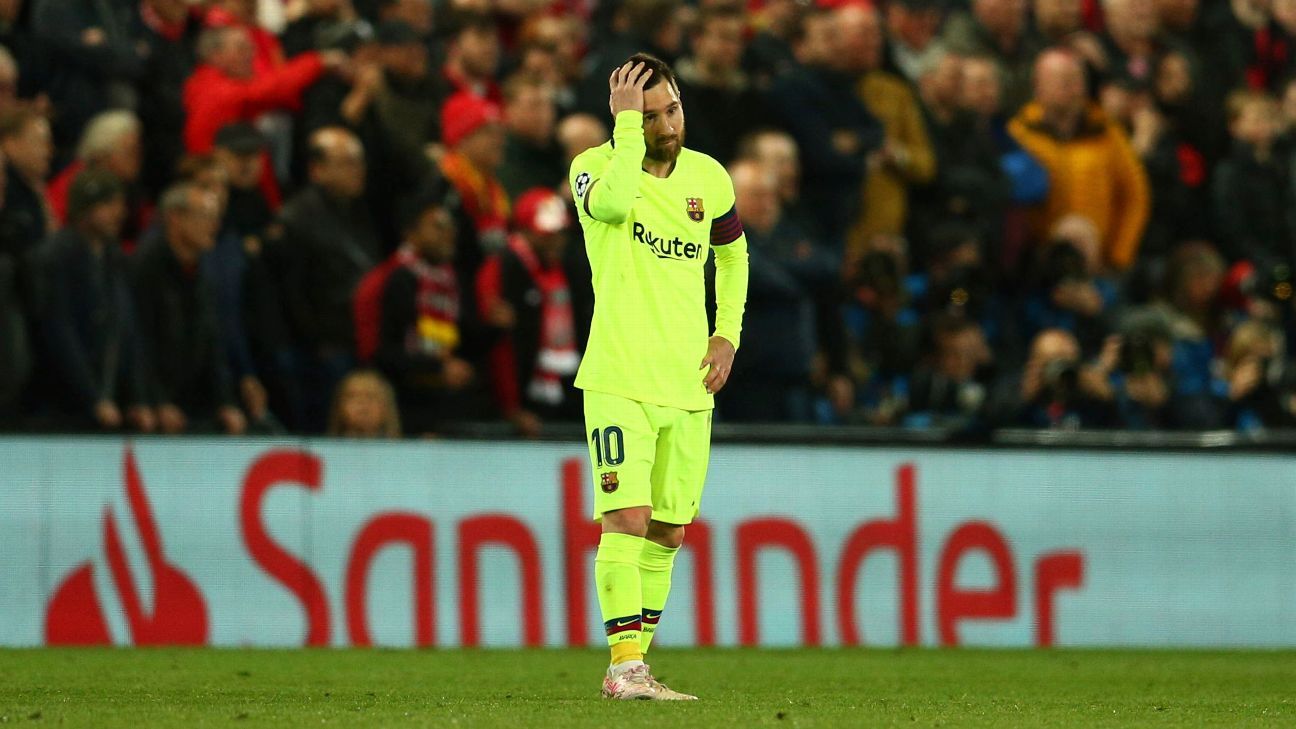 Valencia boss, Marcelino capitalised on this major weakness by delegating former Arsenal midfielder Francis Coquelin on the defensive duties against Messi. The Frenchman man marked the Argentine forward for the entire 90 minutes, a move that actually paid off at the end. Valencia weren’t dominant but made the most of their opportunities, which Valverde acknowledged himself after the game. 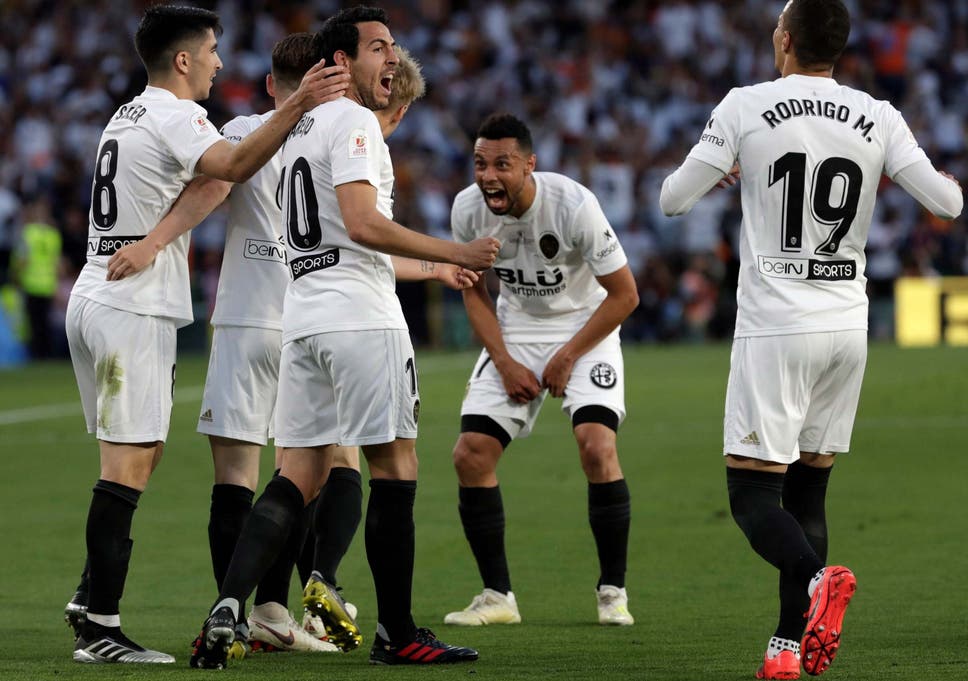 “They are great on the counter-attack and they were very effective,” he said. “We played in their half and arrived easily into the area around their box, but we lacked a spark to finish the moves.”

The Fans: The fans also share part of the blame as they focus more on criticising their team instead of pushing the team out of this current situation. They go as far as booing players who are fighting for the club on the pitch just because they don’t want them next season. 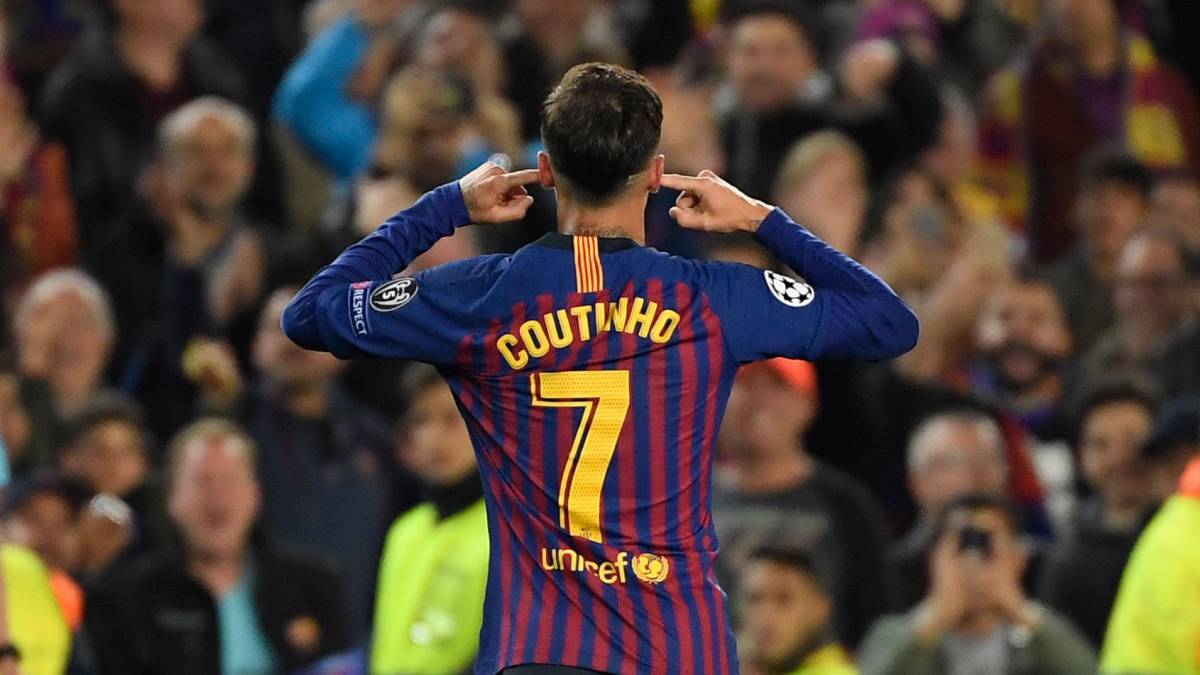 There are ways to do such but not in important games like the finals, where all the squad members need maximum support from fans to scale through their opponents at that very point.

Even in the game against Liverpool at the Camp Nou, Messi told the fans to stop their bad gesture towards Coutinho which shows the captain understands what it means to be booed by fans. 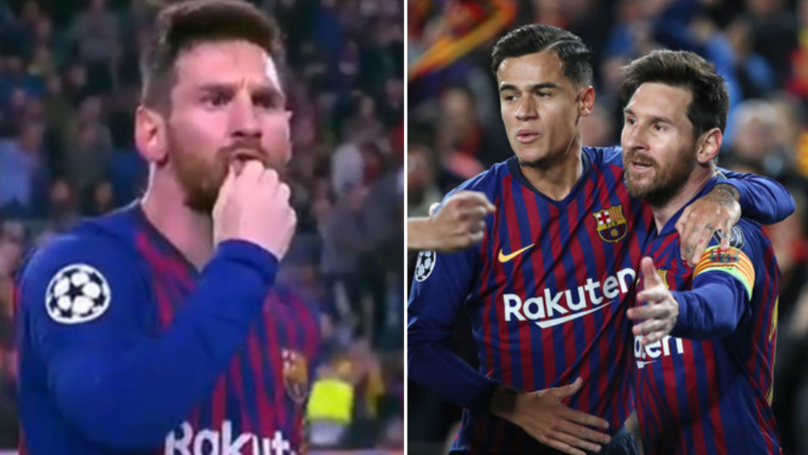 Some Barcelona fans in Nigeria are even happy that they lost to Valencia in the finals, just because they want Valverde out of the club. Why not rally round support for the team first before showing your emotions in other ways after the finals.

Lionel Messi: Yes he is the saviour of the team even when they are playing badly he always try his possible best to get his teammates back on their feet. But did you know he also share part of the blame in this whole situation? 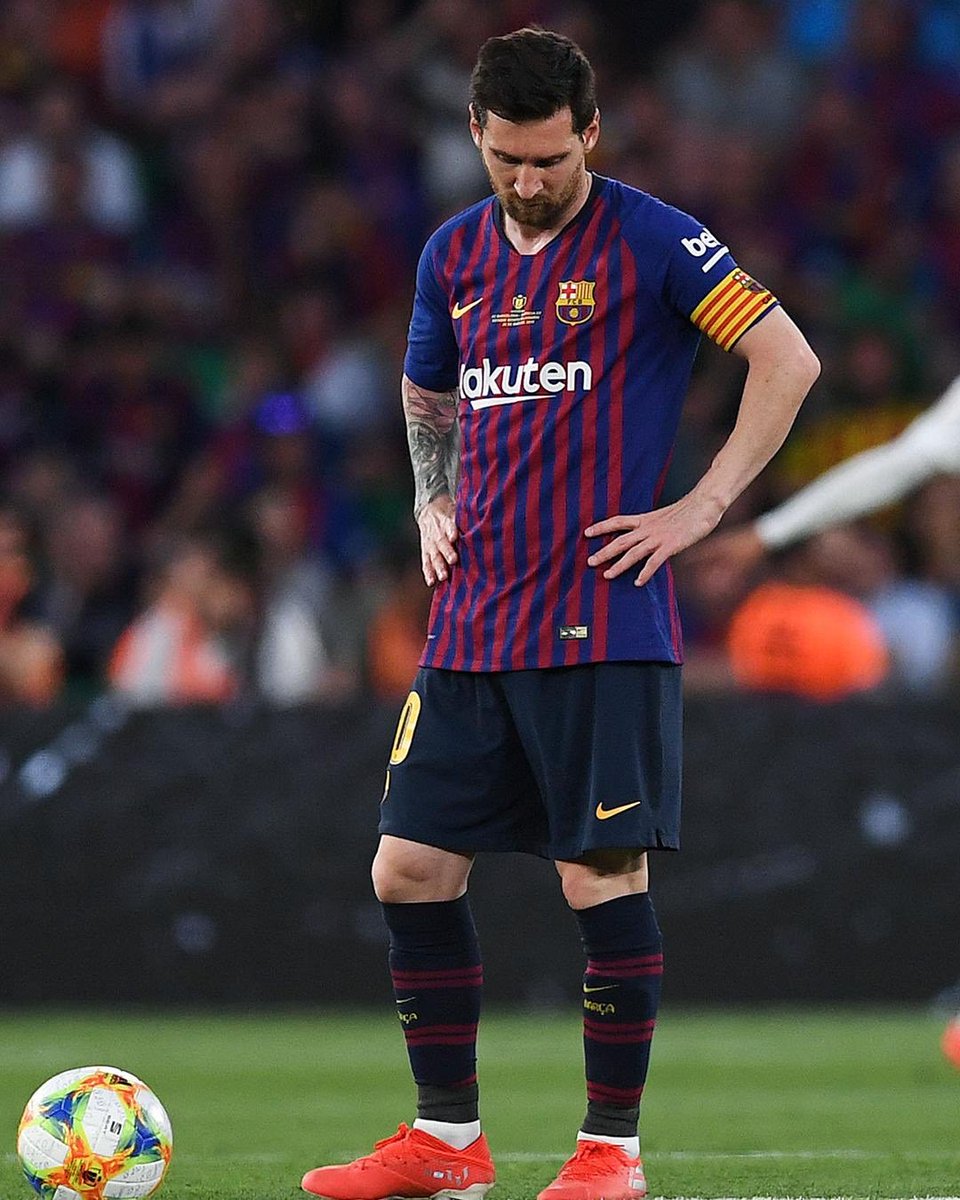 Messi actually deserves all the accolades in their defeat to Valencia as he was the best Barcelona player in the game, but that’s nothing new. It was him against the world at times, and he got the goal that made the game a contest again. He needed a win in this game to stamp his chances of winning the Ballon d’or once again this season but a defeat have thrown in more questions if he really deserves to win the much coveted individual award.

But most fans fail to notice that Messi is not a ‘good leader’ when it comes to motivating the team when they are down. It was seen in their game against AS Roma last season and also against Liverpool, which he also admitted that they fail to get back into the game as they failed to compete.

“There was only one team on the pitch and that was the biggest mistake we could have made. “The worst thing we could do, and what we cannot forgive ourselves for, is the fact that we did not compete. We let them walk all over us.” Messi added. 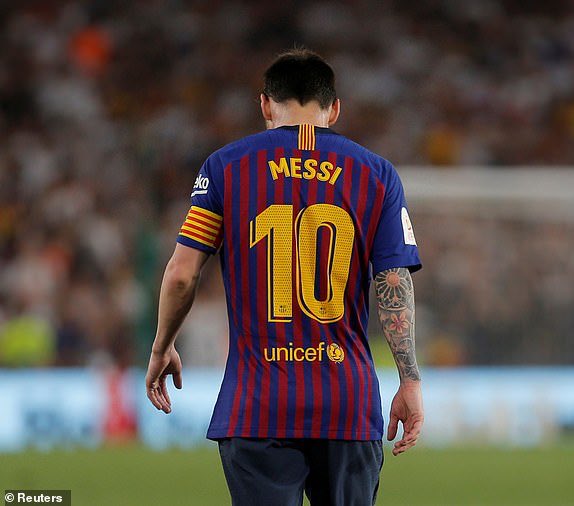 Barcelona needed more than his magical moments in games like this. There are times that a football team need a bit of leadership pull from their captain something Messi has failed to do from time to time not only at Barcelona even with the Argentine National team. 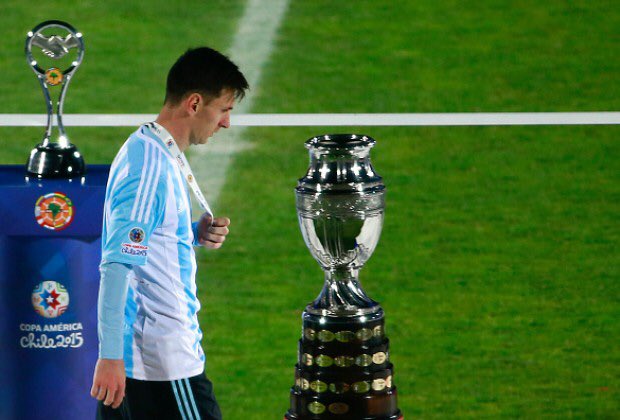 Messi who won the golden boot for the just concluded season was expected to make a strong case for the 2019 Ballon D’Or after missing out on the UEFA Champions League but failed to make good of Barcelona’s final game of the season as they lost the Copa del Rey final in an agonising fashion. Messi will leave for the Copa America wishing he had won a domestic double after helping the Catalan giants to La Liga title. 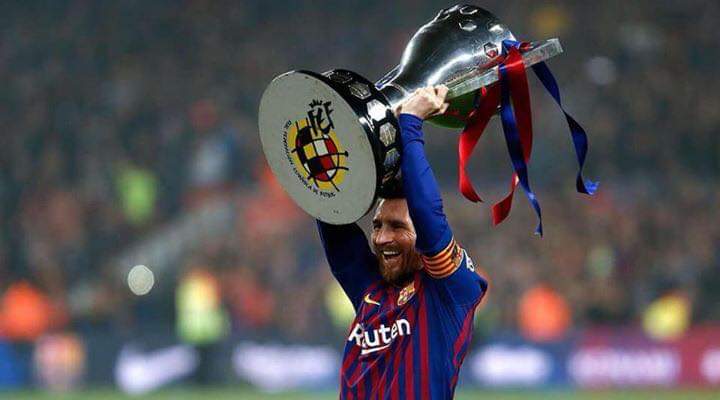 The season is over and the Blaugranas ended it with Spanish La Liga trophy as the only title, after dreaming of yet another treble throughout the course of the season.

Lionel Messi to FCB fans: This year we are winning the Treble.

All parties have their own share of the blame but the question is, WHO IS TO BLAME FOR BARCELONA’S WOES THIS SEASON?