Chelsea moved from 6th to 5th above Manchester United after their impressive 3-0 victory over Brighton and Hove Albion at the Stamford Bridge, with goals from World Cup winner, Olivier Giroud, a brilliant solo goal from Eden Hazard and a spectacular strike from Reuben Loftus Cheek earns Maurizio Sarri’s men all three points in the Premier League encounter.

Hudson-Odoi certainly made an impact out wide, setting up Giroud with a pinpoint cross to give the dominant Blues the lead just before half-time with his first Premier League goal since November. Eden Hazard doubled their advantage with an hour played and Loftus-Cheek – who set up the Belgian – wrapped things up three minutes later with a gorgeous 25-yard strike, sending Chelsea above Manchester United and into fifth.

Hudson-Odoi was the first to threaten, as he cut in from the right in the 11th minute and saw his left-footed strike deflected narrowly over. An even better opportunity fell to Hazard just after the half-hour mark, but he smashed a half-volley over from just inside the area when teed up perfectly by Giroud.

Chelsea did take the lead in the 38th minute, however, as Hudson-Odoi breezed past Anthony Knockaert and played a low cross towards the near post, where Giroud glanced a fine finish in with the outside of his foot. Hazard increased the lead in the second half, receiving Loftus-Cheek’s pass before committing Lewis Dunk and guiding a controlled finish into bottom-right corner from the edge of the area. Loftus-Cheek went one better shortly after, his long-range effort curling into the top-right corner, leaving Mat Ryan helpless and completing a straightforward win. 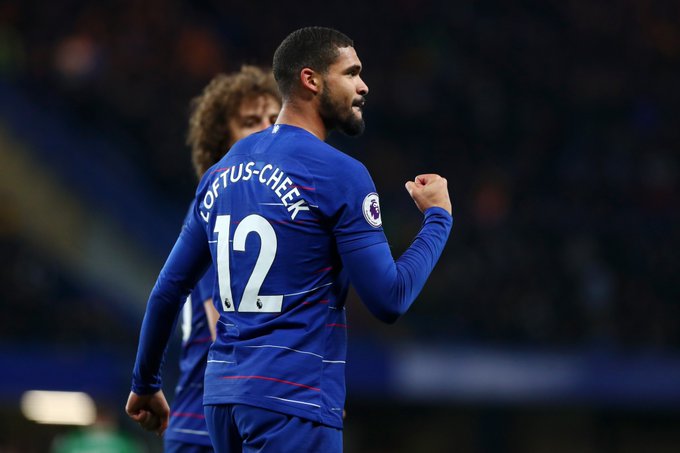 What does it mean? Chelsea’s depth highlighted before run-in

As the Premier League season enters its final stages, it can surely only be a good thing for Chelsea that their squad players look ready to rise to the occasion. Hudson-Odoi, Giroud and Loftus-Cheek all impressed against Brighton, and that could be a timely boost in the race to finish in the top four.

Chelsea fans have been calling for Hudson-Odoi to start a Premier League for most of the season. They finally got their wish on Wednesday and the England international did not disappoint, causing plenty of problems with his direct style and an excellent first-half cross brought about the opener.

A long day for Bong

While he did not receive much help from Knockaert, Gaetan Bong had a torrid time against Hudson-Odoi, hardly ever getting anywhere near him.

Chelsea host West Ham in a London derby on Monday, while Brighton face Manchester City in an FA Cup semi-final at Wembley two days prior.