Few days ago, we reported how Ijaw-Kiri community of Brass Local Government of Bayelsa State, butchered and killed a huge whale which was washed across shore in the early hours of Sunday, 28th July 2019. 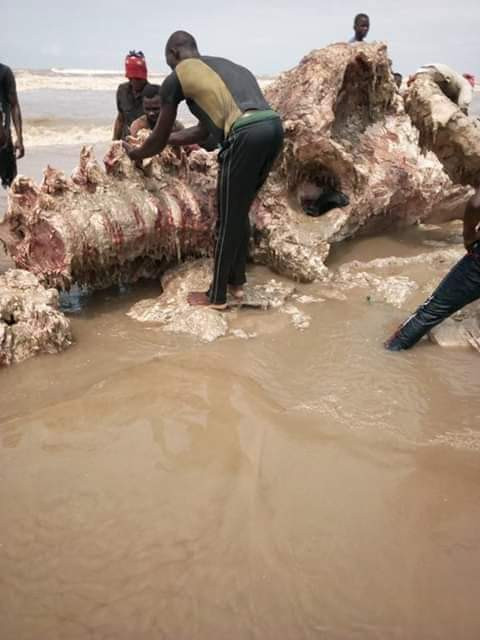 Days after the incident, photos of what is left of the huge whale has been trending after it was shared on social media space. The whale reportedly washed ashore a beach in Okpoama and Onyekia .  Apparently, it seemed the whole community had fed off the whale. 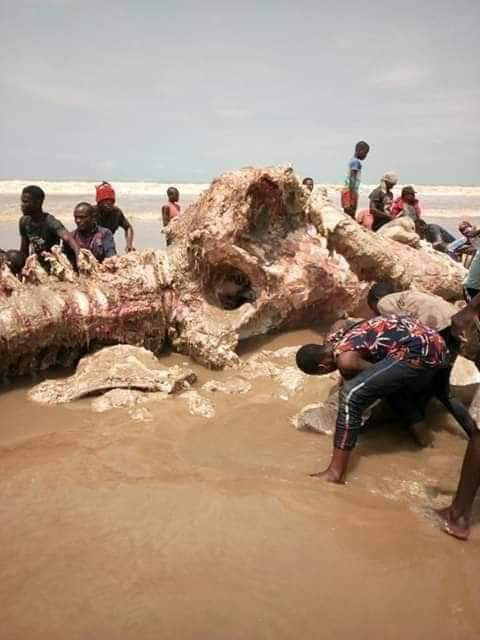 Recall that the people of Ijaw -Kiri were overjoyed after a huge dead whale was swept across-shore at the early hours of Sunday morning. According to reports, the dead whale was found at the beach in the Shaws of Okpoama and Onyekia communities. The images of the grounded whale (fish) have been making the rounds since it was first shared. Watch the video below;

On siting the dead whale, many residents immediately raced home to bring out axes, knives, and cutlasses, slaughtering the huge fish an endangered species. Many neighbouring communities of Odioma and Okpoama were said to have rushed down to the shore to partake in the feast.
The Whale was butchered with a chain saw, cutlass as the resident wheeled off a bucket of whale meat in basins excitedly after it was washed ashore in Okpo. Some stood atop the massive creature, cutting its flesh. The water turned red as blood flowed from the whale’s body. A man was spotted using a saw to cut his portion of the meat.