A MUST READ! Why Nigerian Men Should Run Away From Ladies That Use Waist Beads

In the African continent, the importance attached to the female backside is really high. Truth be told, the female backside represents many things for the African society, just as much sentiment is attached to it. It houses the whole essence of a woman’s feminism and sxxuality.  There is an amazing beauty and history behind waist beads. They are more than mere fetish objects of old fables. Each string of beads holds with it the values, beauty and amusing story of the African people. 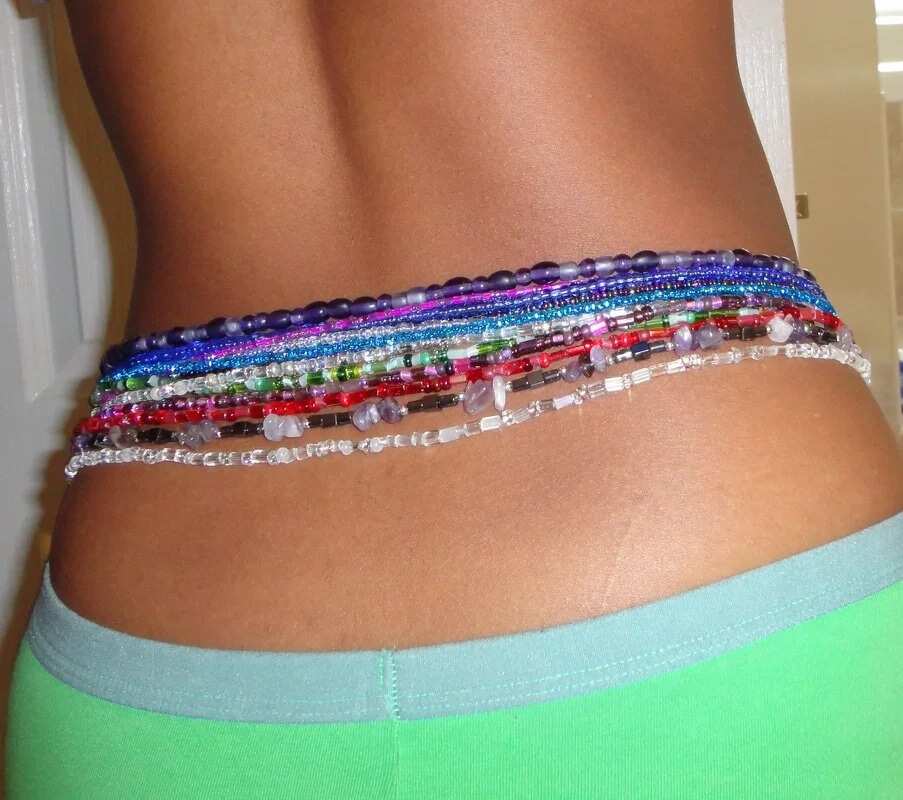 For a very long time, waist beads have been associated with female gender and sxxuality. They are believed to possess great appeal and the ability and power to provoke desire and deep emotions from the opposite gender. Primarily, a traditional female beauty enhancer, they are worn to grace the feminism and beauty, drawing focal attention to the hips, bum and thighs as well as their movement. (The sway of the backside as a woman walks). A woman’s chastity and sxxual character can be decoded by the use of beads. It is believed that the movement of the bead as she walks reveals a lot about her morality, either as promiscuous or reserved. For young African women, wearing of beads was also a symbol of female maturity as they are worn as proof that they have begun their monthly periods and are ready for marriage, hence, the many gifts of beads to young brides. In fact, in some cultures, the strings of beads are used to hold up the cloth across the backside during their period. Waist beads, also known as belly chains were common sight growing up in the 90s in southwest Nigeria. The culture of adorning waists with beads probably began in ancient Egypt where they were called “girdles” and were worn by women as a status symbol. Waist beads are often worn by African women and it holds certain fascination for many. The beautiful stream of color blending could be one of the reasons for this fascination or the way a woman’s lower body moves when this ornament is worn could be another. 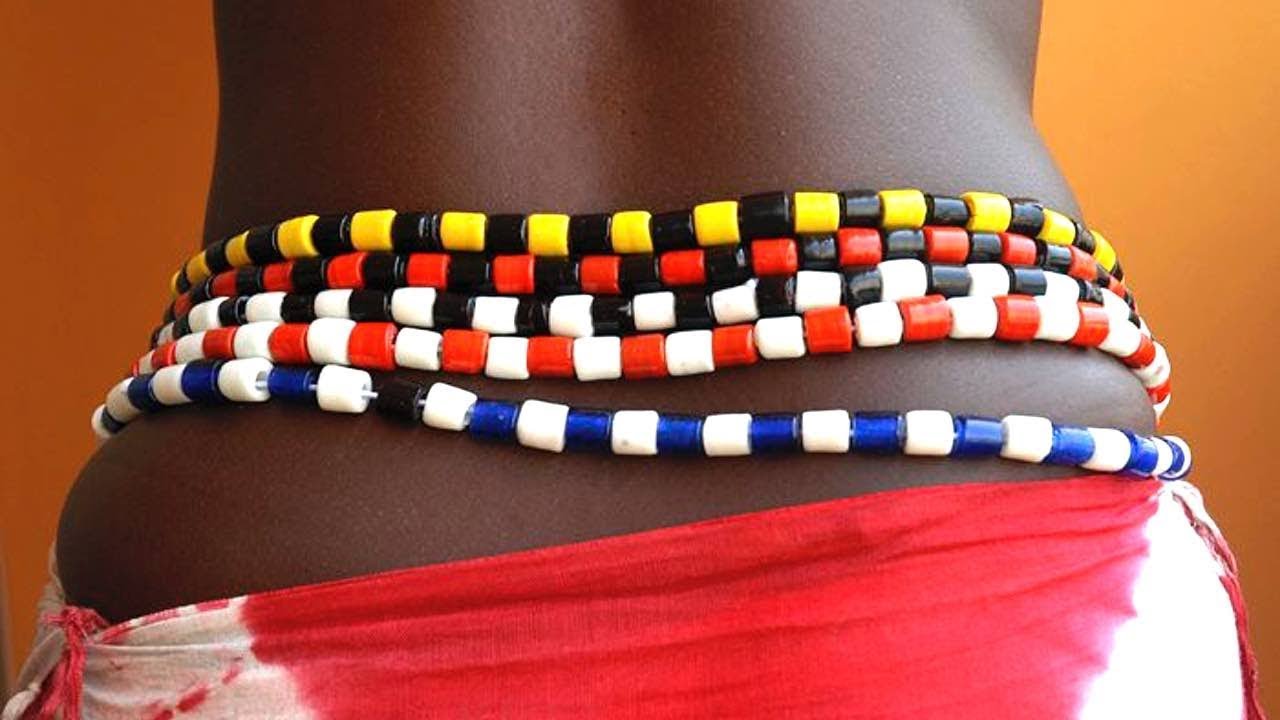 These days, a lot of girls wear waist beads for reasons best known to them. Though a few really don’t know what the different colours stand for, they just wear it for beautification and of course, fashion. But, it is actually deeper than most of us think and sometimes diabolical; in fact, some girls use it as a form of portion. For many women, these beads provide confidence, beauty and balance, especially in a world that daily dictates what a modern or beautiful woman ought to look like. Many testify that wearing them improves their sense of worth and self esteem, making them feel sxxy and enjoy their sxxuality better. Colours like green, gold and blue signify sxxual signals, love, wealth, power, preciousness, energy, self-confidence, vitality, passion and many others. It has been named according to the tribes wearing them.

In Northern Nigeria, it is called ‘Jigida’ while the Yorubas refer to it as ‘Bebedi’. Women’s sxxuality in Africa as a whole is attached to a woman’s backside and the beads help women sway and show off this feature. Although much sentiment is attached to the use of this ornament, some ladies don’t mind wearing them. 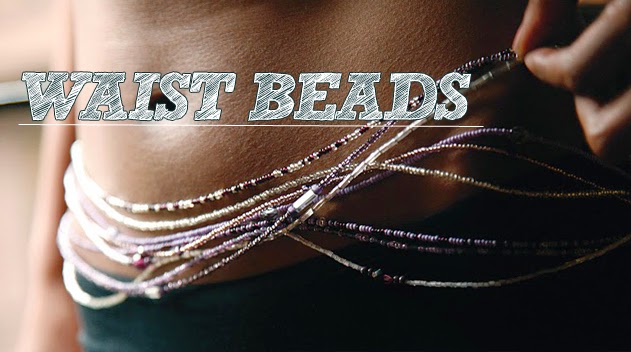 The wearing of beads is thought by some to be obscene, local and primitive. Most parents would not allow their young ones wear them. It is seen as something dirty which is meant for ladies or children with no moral upbringing. It is believed that whoever wears them is wayward and is trying desperately to attract men with it. This misconception has not discouraged those who adore waist beads anyway. They hold special admiration for it.

The waist beads in truth are associated with sxx and sxxuality. It has the ability to stir deep feelings in men. Sxxual pleasure is heightened when men see waist beads resting on a woman’s hips. The beads make the women aware of themselves and the power wielded round their sxxuality. The waist, hips, backside and thighs become the focal point of attention when the bead is worn. Feminism and beauty is enhanced with the wearing of waist beads. Young girls wear waist beads to show they are growing into young beautiful women that are ready for marriage.

There are women who confess using this special African beauty piece as diabolical portions. One effect that the waist beads have on men is improving the sxxiness of a woman.  Men, being visual animals, easily fall in this trap. Moreover, those who cherish witchdoctors pay them a visit to get special waist beads.  They attract men and no man leaves after sleeping with a woman who has invested in this ‘juju beads’. It is alleged that successful beach hookers invoke the power of these diabolical waist beads on unsuspecting men. 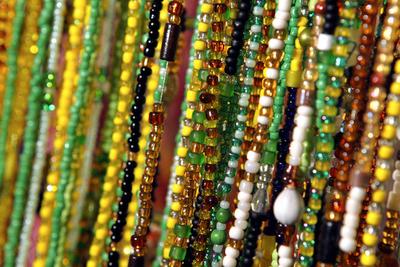 However, these are just a little of the attributes of the beads, and in these attributes perhaps, lie the controversies about the jigida. African waist beads date as far back as early Egyptian history even though the Yorubas and Ghanaians have more robust records of being the source, users and makers of these beads. Waist beads are believed to be sources of great spiritual energy which many link with juju practice. In Africa, waist beads were used for the following purposes: 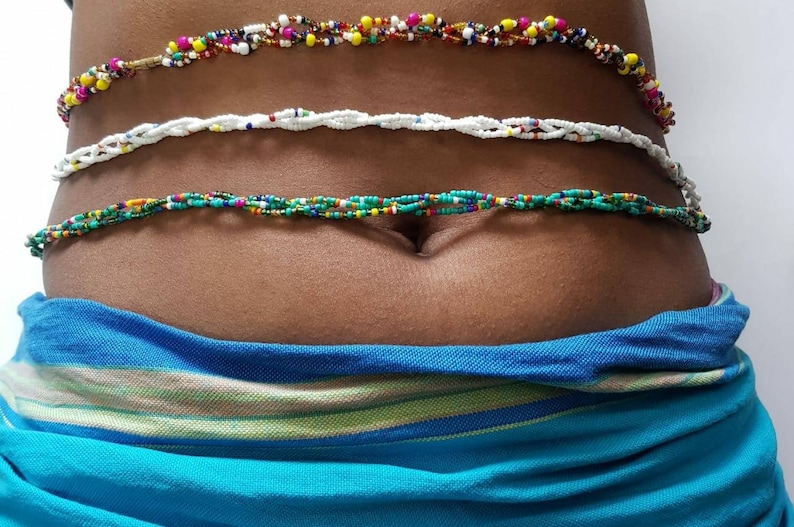 Because waist bead was a regular feature in the adornment of the African women, it helped indicate how they have grown and matured per time. Mothers often adorned their daughters with waist beads during their first flow of blood as a rite of passage into womanhood. 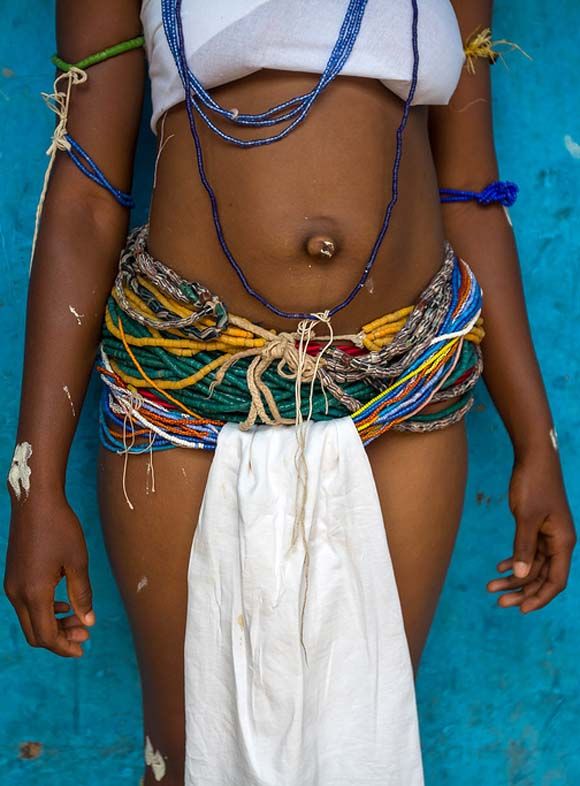 In Eastern Ghana, young girls from the Krobo ethnic group undergo a series of rituals through which they leave childhood behind. The rituals, locally called ‘dipo’, were originally reserved to teenage girls and indicated they were ready to take a husband.

In recent years, human rights groups and parents alike have objected to the requirement for dipo initiates to go bare-breasted for part of the rituals. As a result, girls no older than 3-4 years of age now undergo the process – as it is arguably less shocking for a young child to walk around unclad than it is for a teenage girl. 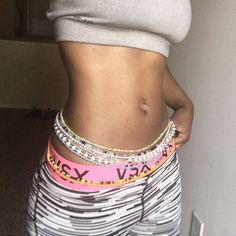 The most popular perception of waist beads is its sxx appeal. It is said that wives often lured their husbands with the rattle of beads or use them to communicate their fertility at certain times of the month. Senegalese and Yoruba women, in particular, stepped up the game with the sweetly perfumed tiny bead strands worn around the waist underneath their clothing.

African women, prior to the advent of scales, used waist beads as a means to measure their body weight. It was also crudely instructive on body weight as a result of pregnancy. Since beads don’t stretch like clothes do, they roll down the waist when weight is lost and becomes tighter or higher on the waist in weight gain. It was also believed that beads help to cultivate a well rounded hips and backside. It is why mothers wear them for their little baby girls.

Growing up, we were told tales of women who laced beads with charms and fragrances that made them irresistible to the opposite sxx. Certain women were famous for their charmed waist beads. These charms are believed to possess the powers to entice and entrap the opposite gender and even improve their sxxual prowess. This attribute no doubt contributes primarily to the negativity associated with waist beads. 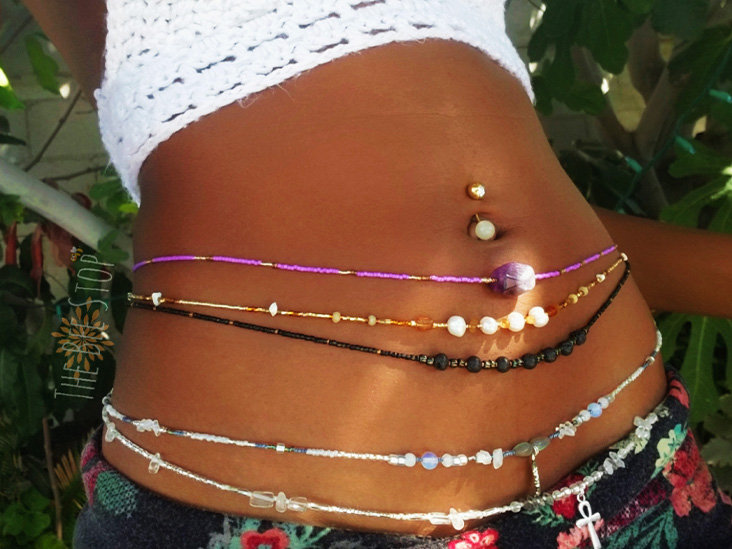 Ghana is regarded as the Bead Production Capital of the World perhaps because of the cultural relevance of beads to her people. Like other west African countries, women have held a long fascination with beads, as symbolic and cultural ornaments of womanhood, sxxuality, fertility, spirituality and wealth. 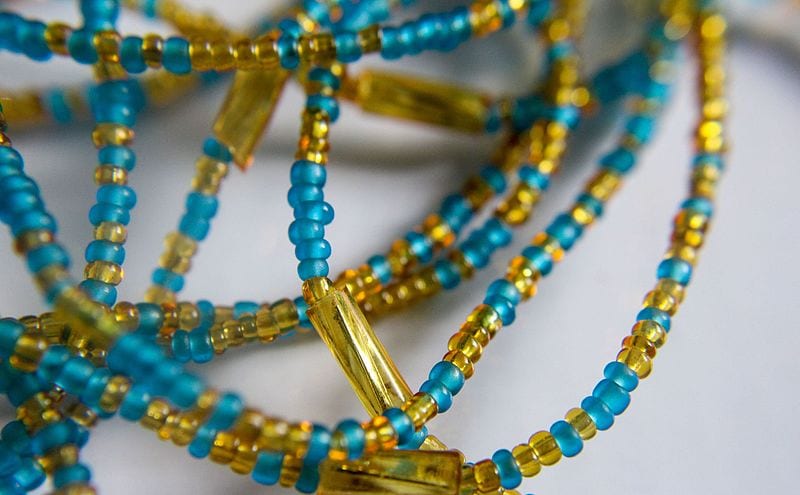 Traditionally, a set of beads for the wrists, neck, ankles, arms and waist formed part of culturally accepted feminine beauty and adornment for the African society. Waist beads used to be an important part of the dowry a man pays for an impending wife. The Yoruba proverb, “One does not, because one’s child’s waist is too fat, put waist beads around the waist of another person’s child” attests to the purely aesthetic function of the waist beads in early times. 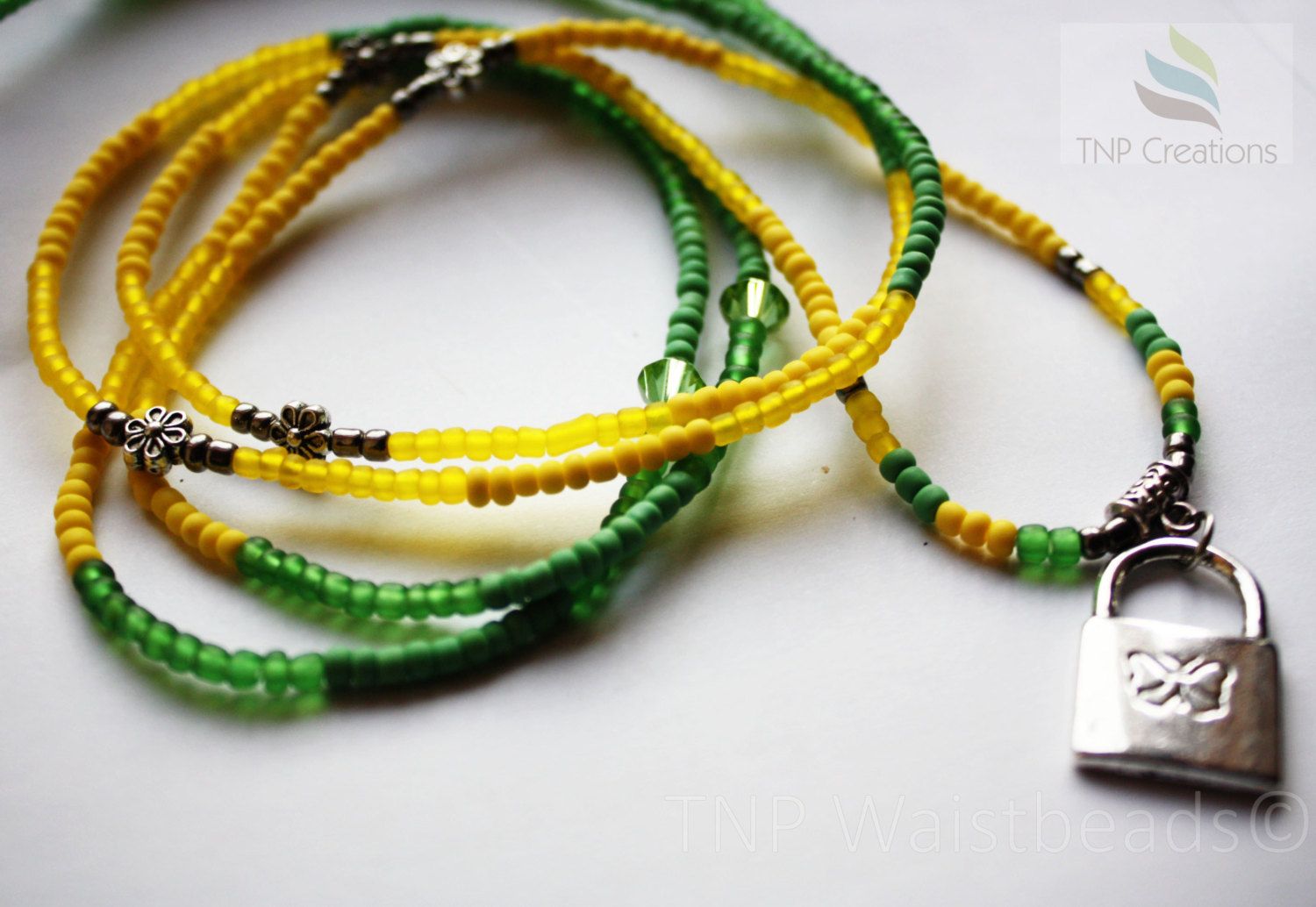 In West Africa, the tradition became such that a lady wears multiple strings of beads around her waist; and the only person allowed to remove them was her husband on her wedding night. Then wedding ceremonies used to be more symbolic than it is now. 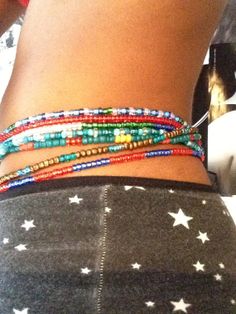 The Yorubas particularly, would ask the couple to consumate their marriage on a bed laid with white clothing and show a blood stained fabric as proof that the lady has never been touched. A stainless white cloth comes with a deluge of shame not only for the lady but her entire family. 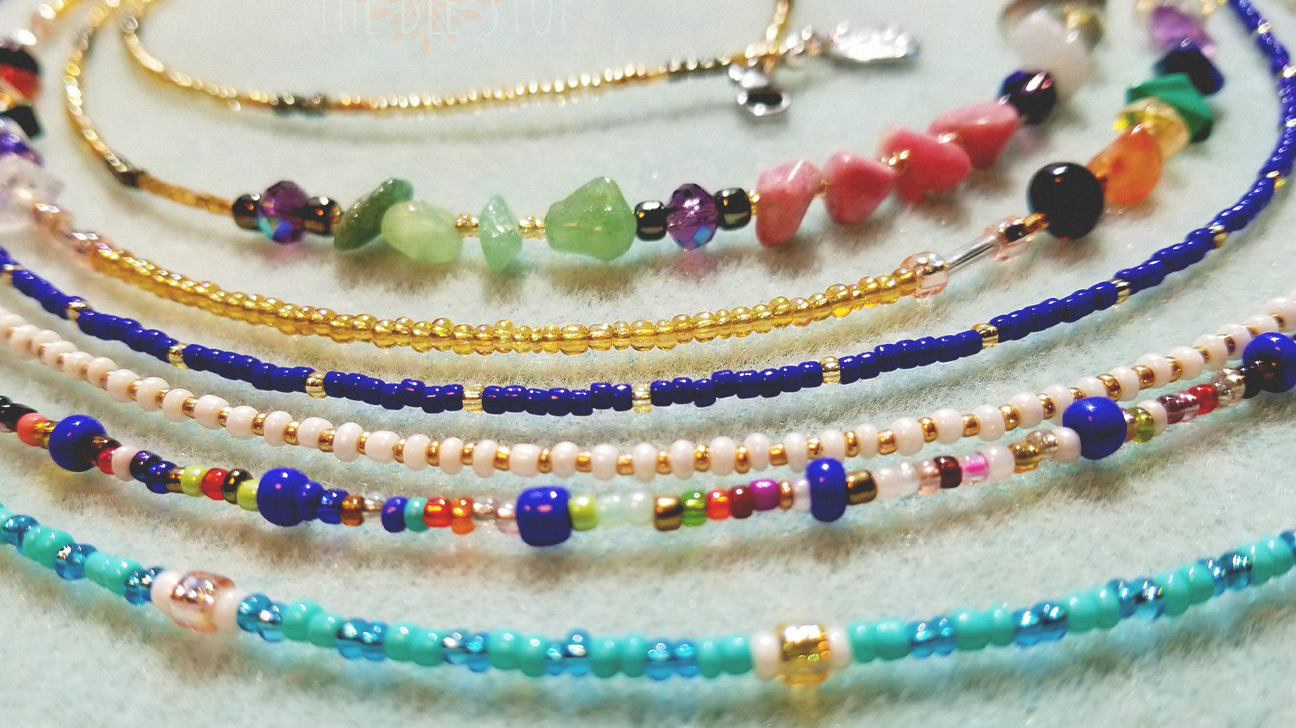 In other culture, the beads were adorned with bells, which was a signal to let a partner know that the woman was clean- meaning she is at the proper stage where physical intimacy is allowed. It’s only now that waist beads are becoming visible. They used to be considered as under wears exclusively worn under garments in Africa.

Traditionally, charmed waist beads are worn by women to ward off negative energy from the body and to close in positive or protective energy around the body. They are especially worn by pregnant women to protect their unborn babies too. The Yorubas are also very famous for their charmed waist beads. These charms are believed to possess the powers to entice and entrap the opposite sxx and even improve their sxxual prowess. These attributes no doubt have helped to fuel some of the negativity some associate with waist beads.

As a Nigerian, I am very sure no one wants to be trapped by a woman, especially when one has no intention to stick by the woman forever. If you are a Nigerian man and you fall in the category of ‘Yoruba demons’ and the likes, RUN!!