The subtle ‘war’ between Ghana’s Juliet Ibrahim and Nigeria’s Iceberg Slim might just be over, and fans are thrilled.

In a heartfelt open letter directed to his ex, Juliet Ibrahim, Iceberg Slim has apologized for disapointing her by lying and cheating on her during the course of their relationship. He went on to reveal that he made the public apology as he felt there was the need to heal and move on with their respective lives.

Iceberg Slim who felt sober about the entire situation emphasized on the fact that the fact apology is coming after almost a year of separation shouldn’t matter. Check out the post below

Recall that the Iceberg Slim was fond of throwing jabs at Juliet Ibrahim after their much publicized relationship ended. Sometime ago,  he took to social media to post a light jab that suggested that it was directed to his ex actress girlfriend. He posted;

“This Could Be Us But You’re a CHEETAH.”

After their break up in 2018, the rapper also shared a similar message. He wrote:

“When a toxic person can no longer control you, they’ll try and control how other people see you. The misinformation will feel unfair, but stay above it, trusting that other people will see the truth, just like you did,” 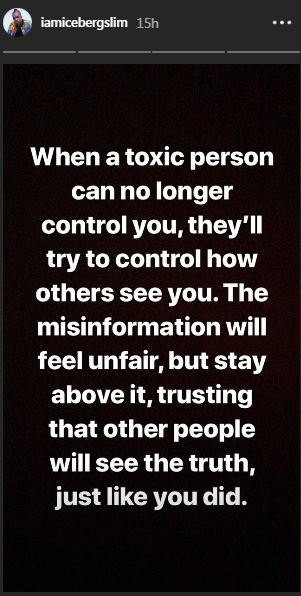 In fact, at a point, veteran Nigerian comedian, Basketmouth had to ‘slam’ Iceberg Slim after he claimed African men do not cheat. The rapper flaunted his polo that reads, ‘African Men Don’t Cheat’

Basketmouth shared the picture on his official Instagram page with a view to ridicule the able-bodied young man whose controversial break up with Nollywood diva, Juliet Ibrahim was not forgotten at the time. He said: Iceberg Slim’s contrite apology finally shows he has owned up to his mistakes and the fact that, cheating is cheating, irrespective of the continent you’re from. What do you think Juliet Ibrahim’s next step would be?

Tell us what you think in the comment section.