While the loss of lives has ravaged the Nigerian movie industry, Nollywood, a film manager has brought joy to many as his wife has reportedly delivered a baby boy. More details below. The Manager of Okiki Films and Music Productions, Arena, Oshodi, Lagos, Oyelere Abiodun aka Amsterdam, who sometimes play the role of a Police officer or Armed Robber in some Yoruba movies is in happy mood. This is sequel to the safe delivery of his wife, Oluwaseun Oyelere, who put to bed a bouncing baby boy on Thursday 5th June 2019.

The boy www.yorubamoviegist.com learn is their 3rd child and she delivered him at Miraculous Medical Center, Alagbole, Ogun State. As of the time of filing this story, Mrs Oyelere and her new baby were said to be in sound health conditions.  We send a hearty congratulations to the couple.

Just like yoruba actor, Oyelere Abiodun, popular rapper, Zlatan Ibile recently announced the arrival of his baby on social media. Though he did not reveal further details on the sex the comment section on the post was filled with congratulatory messages from fans and other celebrities alike.

Joining the list of fathers is Yoruba Movie Director, Adekola Ojelere who welcomed twins on his birthday. On May 17th 2019, the movie boss added a year and he decided to celebrate it with motherless babies in Ghana, where money and food items were given. Later in the evening, his wife, Munumidun Favor Adekola delivered a set of twin (a bouncing baby boy and a girl) at one of the private hospitals in Ipaja area of Lagos.

Adekola isn’t the only one in Nollywood who has welcomed twins in 2019. Earlier this year, popular actress, Funke Akindele aka Jenifa in ‘Jenifa’s diary’ also welcomes a set of twins after going through a previous marriage that bore no fruit. The actress got married to popular artiste turned producer, JJC Skillz and after many years into the marriage became a proud father of twins. 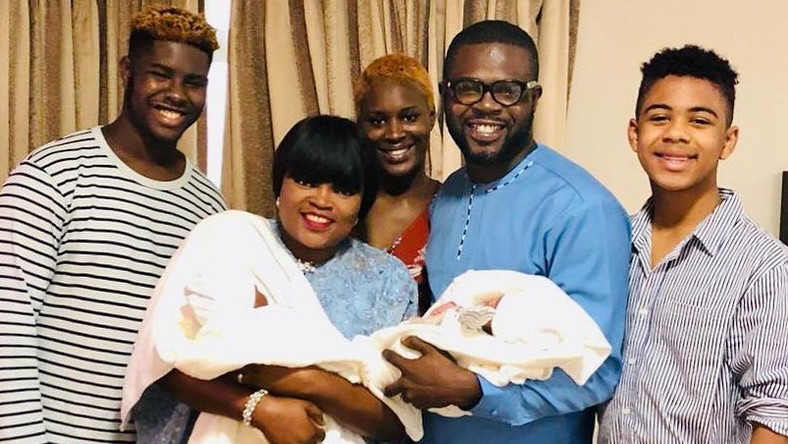 What are your thoughts on the latest delivery? Kindly drop your opinion in the comment section below and don’t forget to share.