A viral photo trending online, captured moment Ned Nwoko who had a romantic moment with Regina Daniels carried the actress on his back.

Ned Nwoko carried Regina Daniels on his back, while her friends and his Moroccan wife laughed. Here is the viral photo below:

This is coming after it was reported that the actress’ mother, Rita Daniels and her uncles clashed on Facebook as they revealed each other’s family secret. The family feud got heated up as relatives of her father, Ojeogwu Tony Molanto, came out to say that Barrister Jude Ojeogwu is her biological father and that Regina denied her father in public but secretly pacifying him with a jeep as compensation for her getting married without his consent.

In a swift reaction, Regina’s mother, Rita Daniels, reacted to Molanto’s allegations and they both exchanged bitter words which led to the spilling of dirty family secrets. She alleged that the Ojeogwu’s family were not there when she started off life with her children in an uncompleted building. 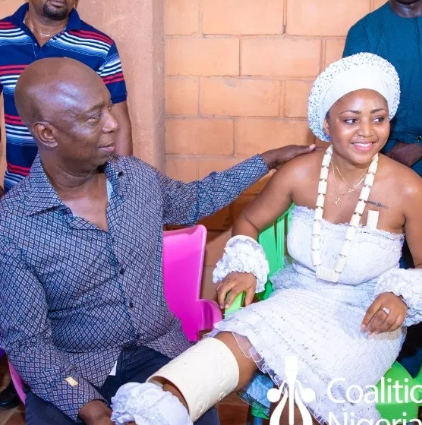 Regina Daniels on the other hand, is adapting so fast to her new life as a wife and step mother as she is seen spending time with her step children just before bed time. The young actress also showed off her stomach to womb-watchers speculating she is pregnant thus her reason for marry Barrister Ned Nwoko.

Check out more photos of Regina Daniels, Ned Nwoko and their children.