Model and Actress Annie Idibia is a beauty to behold. She is indeed an African Queen. Before the start of her acting career, Annie Macaulay Idibia competed at the “Queen of All Nations Beauty Pageant” where she placed runner-up. She went on to feature in a cameo appearance on 2face Idibia’s music video “African Queen” song. Annie Macauley Idibia is an actress, producer and business woman who got married to longtime boyfriend, Tuface Idibia back in May 2, 2012 and they both have two beautiful daughters together.

Everyone Is Fighting A certain Battle Right Now… “Thank God We Don’t Look Like What We Are Going Through Right NOW??

Annie Idibia was born on the 13th of November 1984 (31 years) in the town of Eket, Akwa Ibom state. From a family of four children; three brothers and herself. Annie’s mum and dad divorced 20 years ago. She grew up in Ibadan along with her parents before they divorced 20 years ago. Her father who worked at Mobil left them with their mum who was a full-time house wife. Annie who was born with a silver spoon didn’t grow up with it because their father left them. After her parents divorced, her mother got a job with Mobil working as a cook to support the family.

Thereafter, they moved to Jakande Estate, Lekki, Lagos and later moved to Thomas Estate, also on the Island. Annie lost her younger to tuberculosis at the age of 15. She started working immediately after she graduated from secondary school at age 15. She worked as a sales girl in a boutique and two other places before she got admission to study. Annie also worked part time as an undergraduate of Computer Science at the Lagos State University when she was 18-years-old. Thereafter, she got admission into the University of Lagos where she bagged a degree in Theatre Arts. Her major heartbreak was when her parents divorced. It affected her so much while she was in secondary school but her mum tried her best to make life meaningful for them.

Annie proved to be a good daughter by assisting her mother in her shop which was very close to their house after school continuously working to make ends meet. She has however reconciled with her father after much pressure from her mum. Now they all have a good relationship with their father. Annie made her big debut in Nollywood back in 2009, but before then she had featured in minor roles while in the University. She attended so many auditions after her secondary education and also did some modelling jobs for a while earning as little as N2000. The highest fee she ever earned was N5000 but she wasn’t discouraged. She worked with Dakova and KC Jabari and also did ushering jobs at events. 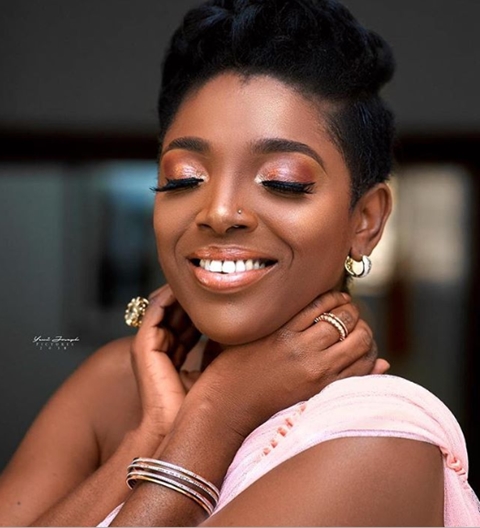 She was also second runner-up of Queen of All Nations Beauty Pageant and after that she went fully into Nollywood where she has spent over four years as a professional actress. She met her husband Tuface in 1999 and they started dating in 2002. Their relationship was constantly plagued with 2face’s cheating scandals. Though, there were times they had differences during courtship but the bond they shared and love for each other took them to the altar. She has 5 step-children: Zion Idibia (born in January 2006), Nino Idibia (born in April 2008), Rose Idibia, Justin Idibia and a son who’s name is unknown (born in April 2012).

She gave birth to her 1st child, a daughter Isabella Idibia, in December 2008 and her second, Olivia Idibia in January 3rd 2014. Annie has starred in various movies since the beginning of her career and now owns her hairline ‘BeOlive’ along with an international studio in Atlanta.

What do you think of Annie Ibibia’s simple appearance? Kindly comment below.