WHAT?! Davido Gets Ready To Relocate To Banana Island Because Of His New …….. 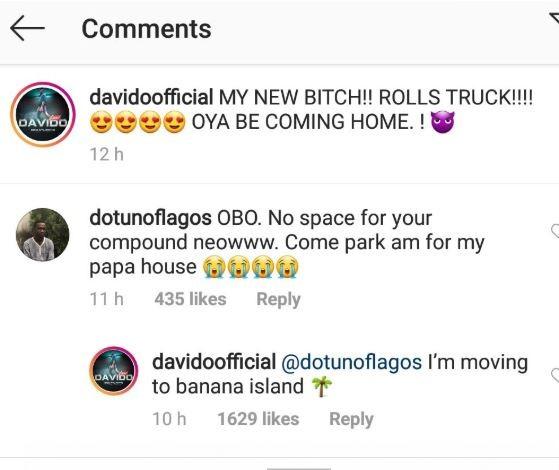 Davido is considering relocating to

Davido has proved himself to be a serial car collector. Expensive ones too. When his girlfriend Chioma turned 23 in April, he buys her a Porshe. This generated a lot conversation including from celebrity friends AY, the comedian. In 2012, the Headies announces Davido as the winner of the Next Rated award. By this time he was only 20 years old. Part of the perks is a red-coloured current model Hyundai Sonata car prize he receives in 2013. This launched in the pop star an obsession for expensive cars. After starting HKN Records with his cousins, Davido’s fortunes and car collection goes on an increase because of his commitment to acquiring the best of them.

Between 2013 and 2016, Davido has secured six tight whips. And by the end of the year 2013, he adds a Chevrolet Camaro GS valued at N6 million; a Audi Q7 valued at N12 million; a black Range Rover Sport valued at N16 million; a black Mercedez Benz G-Wagon he closed at N21 million after releasing the ‘Skelewu’ single. Over a duration of three years, he buys a Porsche Panamera valued at N28.8 million and an Audi R8 for his 23rd birthday in 2015. The latter is reportedly worth N23.4 million.