PepperDem! After Thinking She Was Dead, Khloe Steps Out In Style

As fatal as the accident looks, she made it out alive; according to her, she thought she was dead. Abiri Oluwabusayomi popularly known as Khloe got involved in an accident in the car footballer Obafemi Martin got for her few months ago. If you think Khloe will sit down and sulk over her damaged car, then you must be mistaken as the fashion designer has stepped out like nothing ever happened. 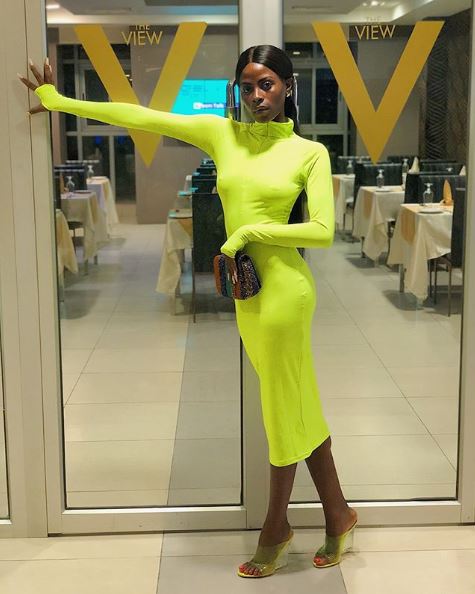 Abiri Oluwabusayomi aka Khloe of the Big Brother Naija fame stepped out with a smiling face despite losing her car which is reportedly expensive. She was involved in a ghastly motor accident yesterday night and the vehicle’s frontage is in bad shape. The horrible accident which according to Khloe almost claimed her life hasn’t overwhelmed her as she stepped out on a body-hugging lemon dress to pursue her day to day activities.

After getting the gifted Car, Khloe confirmed that she did have a relationship with the footballer and the car gift wasn’t just a random gesture. She said, “I really don’t want to talk about it. However, I felt good about it and it (car gift) wasn’t just out of the blue. People really need to stay away from our personal lives. It’s someone’s family we are talking about here and I wouldn’t want to be the cause of anything untoward. Obafemi Martin’s wife is my friend and she has already come out to say something about it. I am friends with the family. We have been friends for a very long time and we will be friends forever. You guys don’t even know the ties that bind the two families together; I have a longstanding relationship with them.”

Khloe also rubbished insinuations that she was recently robbed because she flaunts material things on social media. “The fact that I posted something for people to use me as a point of contact, or to use my story as an example is not a reason for me to be robbed. Meanwhile, I wasn’t robbed physically; someone actually broke into my house to steal my car keys. It is something that happens every day all over the world; it has nothing to do with what I post on social media,” she said. Big Cheers to Khloe for cheering up, because she knows God gat her…..