Saddening! See Why Girl 10 Years-Old Was Starved And Burnt By Step Mother

The delicious smell of freshly baked cookies filled the apartment in Gwinnett County, Georgia. Tiffany Moss pulled out the warm batch from the oven and left them to cool on the kitchen worktop.

She’d had a craving for chocolate all day and had made her husband Eman pick up some cookie dough on the way home from work.

When they were ready, Tiffany and Eman tucked in with their two young children. They were a picture of a perfect family, but in the bedroom nearby, the scent of the cookies was torture. 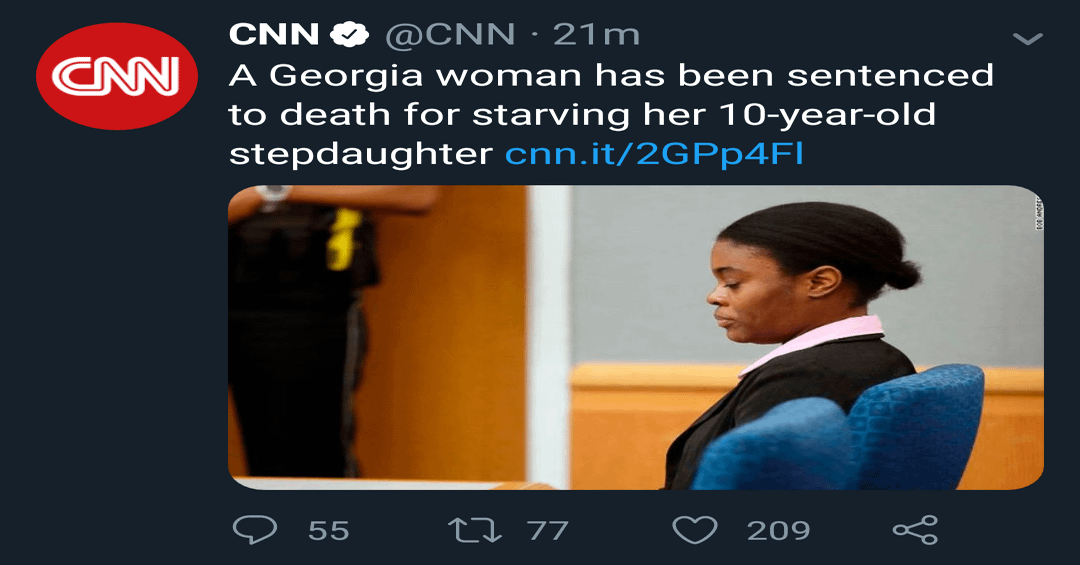 A young girl lay weak on a bed, stomach empty and her limbs just skin and bone after weeks of barely eating. She wasn’t allowed to feast like the rest of her family – in fact, she didn’t feel like she was part of the family at all.

Emani, 10, was dying and no one was doing anything to stop it. When pre-school teacher Tiffany and Eman got together, he already had daughter Emani from a previous relationship.

Emani’s mum had battled with addiction and, although she’d tried to get custody several times, they went against her and Emani stayed with her dad.

Tiffany and Eman married and went on to have two children together. Tiffany was now Emani’s stepmother and with Eman working two jobs, she was home with the children more.

Emani was a sweet, gentle girl who loved to smile but Tiffany had no time for a daughter who wasn’t biologically hers. She would message Eman at work, complaining that his daughter was constantly misbehaving.

It may have started off as Tiffany ignoring Emani and overlooking her so she could treat her own children better, but it quickly escalated to something far more serious. 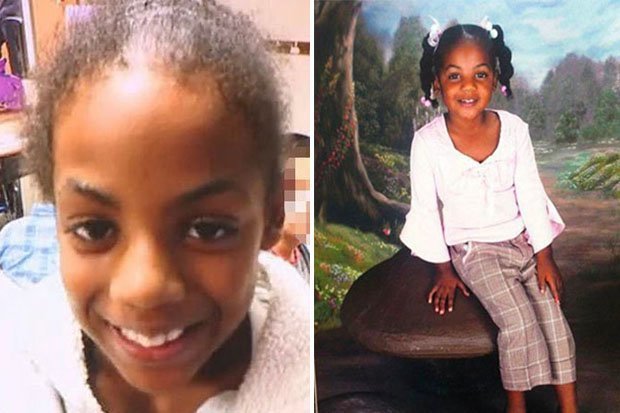 In 2010, when Emani was six, her teachers reported some worries to social services and Tiffany was charged. She ended up pleading guilty to hitting Emani with a belt.Ge

Tiffany insisted it had only been ‘two or three’ times, despite it looking like prolonged abuse. Tiffany was sentenced to five years on probation.

She lost her job and blamed Emani. Tiffany pulled her out of school and kept her at home, and the abuse towards Emani started to escalate.

Two years later, Emani attempted to run away at least twice and tried to sleep in bushes rather than go home. When she was found, she said she didn’t want to go home and claimed her stepmum tied her up with belts and put her in cold showers.

Tiffany denied it all and there was no evidence to bring any more charges. Emani was accused of making up stories and she was returned home. But Emani wasn’t lying and it was worse than anyone could have imagined.

Emani was being kept in her bedroom and was being deprived of food and water. At least twice, Tiffany sent pictures to Eman of meals she’d cooked him and her two children – who remained happy and healthy.

All the while, Emani was wasting away. On 2 November, 2013, a suicidal Eman called 911 saying that his 10-year-old daughter was dead.

When police arrived at the apartment, they were horrified to find a galvanised steel dustbin outside with the partly burnt body of a young girl – Emani.

What horror had happened in the Moss home?

Tiffany had fled to her mum’s but was tracked down and arrested too. At first, Eman said Emani had died from ingesting chemicals and, rather than reporting her death and getting into trouble, they had tried to cover up the accident.

But his story made no sense.

At the time of her death, Emani weighed just 32lbs (2st 4lb), the average weight of a toddler – she was severely malnourished.

He said his wife had called him on 28 October to say Emani was dead. Their neglect meant that she’d literally starved to death in her bed. 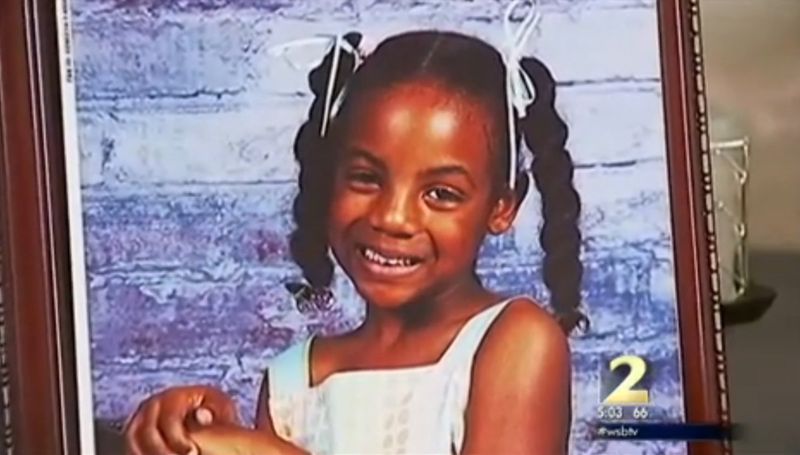 Eman claimed he wanted to call 911 but he went along with Tiffany’s depraved plan to cover up the death and allege that she’d run away.

They hid Emani’s body in their computer room and carried on with their lives as normal. Tiffany was still on probation for hurting Emani and knew she risked losing her two biological children if word got out that Emani had died.

Eman said Tiffany had suggested they ‘cremate’ her remains. Eman went out and bought a steel can, bin bags, charcoal and lighter fluid. They drove Emani’s body to a rural area on 1 November, and even took their two other children.

Sickened to the core

They bent Emani’s body – that was stiff from rigor mortis – crunching her bones in order to get her inside the barrel. They sprinkled lighter fluid inside and set the body alight.

Eman said they watched the flames for ‘five minutes’ before realising that the fire wouldn’t burn her remains. So they took Emani’s body back home until Eman’s guilt got the better of him the following day and he told authorities.

Tiffany and Eman were charged with murder. When details of what happened to Emani reached the press, the community were sickened to the core.

Many questions were asked about how it had been allowed to happen. 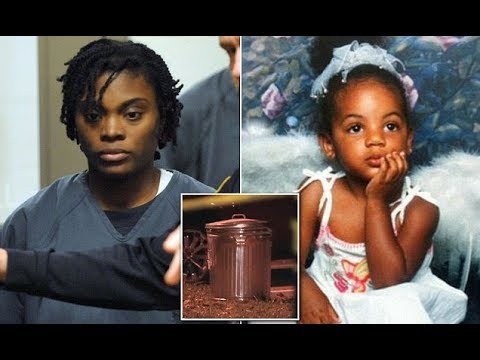 How had no one helped Emani?

Eman agreed to testify against his wife and, in 2015, he pleaded guilty to felony murder and was sentenced to life in prison.

At Tiffany’s trial this year, she declined a lawyer and acted in her own defence but didn’t testify, gave no statements and called no witnesses.

She said she believed God would help her through. It was a harrowing trial with jurors subjected to traumatic images and details. The prosecution said Tiffany had starved her stepdaughter to death.

The prosecution said she was angry with the child for getting her fired, and annoyed that she had to care for a child she didn’t want.

‘As a result of that, a 10-year-old child is starved to death while her own children remained healthy and happy.’

Eman – who was still married to Tiffany – testified against his wife. He said his wife and daughter had a ‘love-hate relationship and could not get along’. He admitted things had got tougher after the abuse case, with Tiffany angry at young Emani for getting her into trouble. 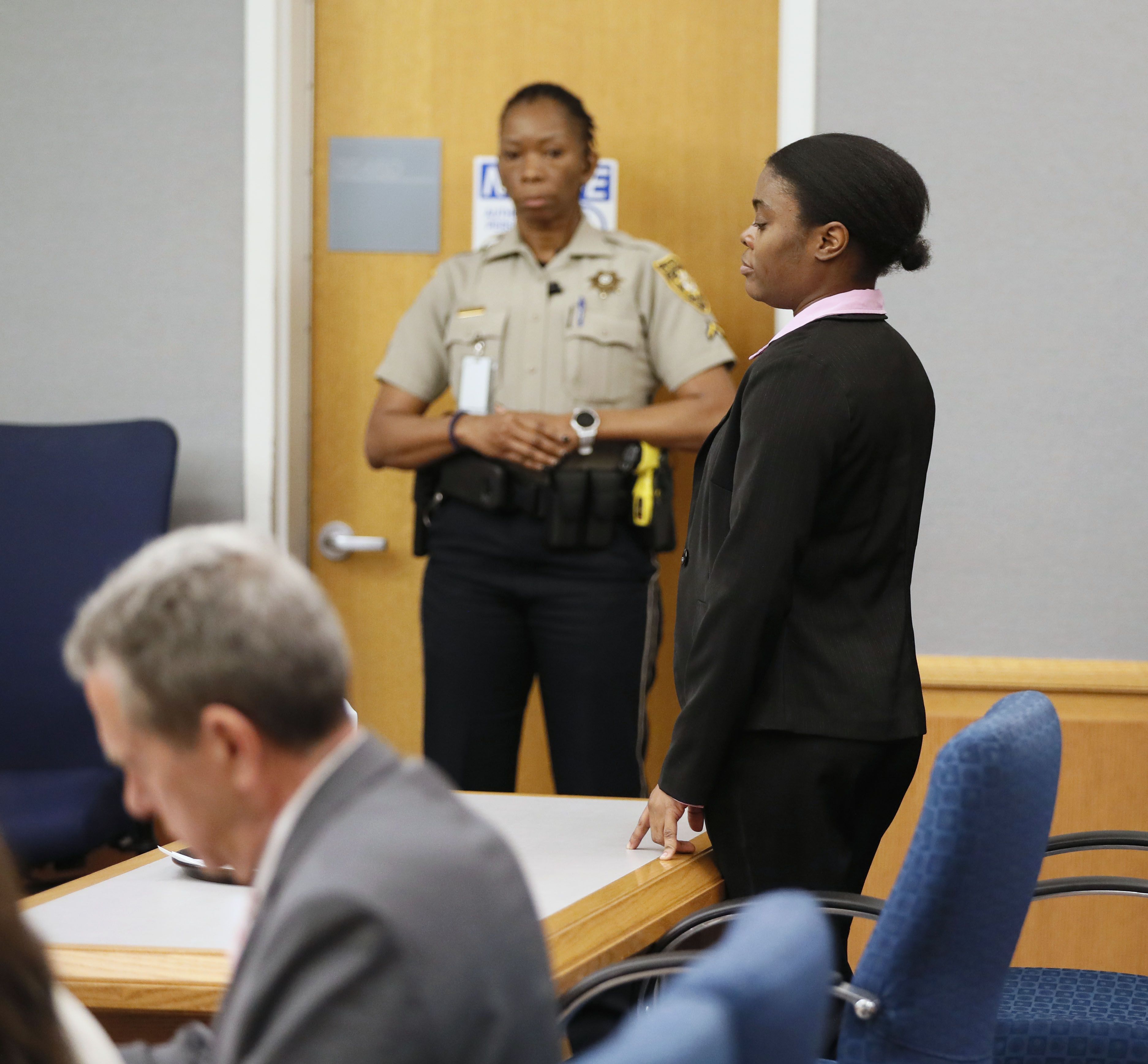 Eman testified that in the days before his daughter died, she’d had a seizure – likely from severe starvation. Tiffany said they couldn’t take her to the doctor because she was too thin, so they put her in bed, where she died.

When Eman was asked why he hadn’t called 911, he replied, ‘I was trying to fix a problem that couldn’t be fixed.’ Eman said Tiffany had wanted to bury the body but he’d said no.

They’d attempted to cremate Emani, then finally he called 911 saying he was unable to live with the guilt. But his words were empty when the sickening details of Emani’s horrific end continued to be heard in court.

Jurors covered their mouths as Eman described ‘cracking’ his daughter’s bones to get her body inside the steel bin. Medical experts told of how Emani wasted away without food or water, laying in her own waste because she was too weak to move.

The jury were shown upsetting autopsy photos and told how Tiffany was able to look after her biological children but not Emani because she wasn’t deemed worthy enough.

‘She was nothing,’ the prosecution said, describing how Tiffany saw Emani. ‘She was a nuisance, she was ugly, she was a pain, she was disposable, she was trash.’

Jurors cried during closing arguments as they heard how Emani Moss ‘lived with the evils of this world’.

Tiffany, 36, was found guilty of murder, child cruelty, and concealing a murder and in April this year was sentenced to death. She became the only female on death row in the state of Georgia but showed no reaction to the news and declined to speak.

If given a lethal injection, she will be only the third woman executed in the state’s history. The planned date for her execution has been and gone due to the automatic appeals.

There continue to be questions raised about how no one saved Emani. Her grandmother, Robin Moss, has filed a lawsuit against the Department of Family and Children’s Services.

She said they were alerted to the neglect of Emani and didn’t follow it up. Her school reported neglect too. The only thing for certain was that young Emani was horribly let down. She spent so much of her short life without love, but in death, she has the sympathy of the whole of America.