BBNaija: Ebuka Comes After Mike After He Did This (Video)

The Pepper dem gang are giving BBNaija fans some funny times. Following the theme of week 3 which is ‘Music’, the housemates got a new challenge for Thursday Night Task presentation from Biggie and the result has gotten Nigerians rolling on the floor with laughter. 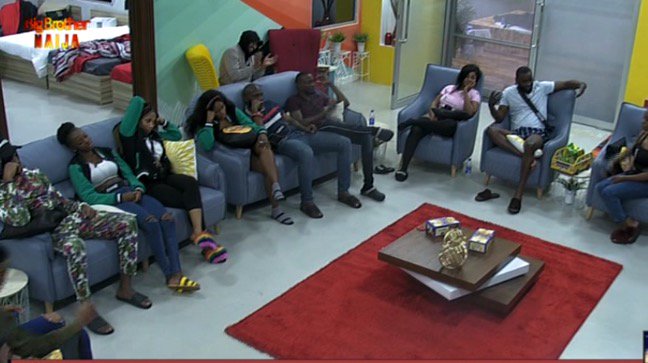 This Task which is proudly sponsored by Pepsi Naija, had the Pepper Dem Gang singing their way to victory and fully-kitted Pepsi T-shirt and Pepsi slides were delivered to them. The challenge had to do with the housemates singing different Nigerian songs like a choir and the best would win 1.5 million Naira, and a 4 day all-expense paid VVIP trip to One Africa Music fest in Dubai, courtesy of Pepsi Naija.

Who do you see winning this "Pepsi Know Da Lyrics" challenge?
The #BBNaija Housemates have been able to show us why music may not be their calling. 😏https://t.co/aZmNWu1qrC pic.twitter.com/xY0JcxRlTR

It was, however, not an easy one as most of them kept murdering the lyrics. So far, the BBNaija Housemates have been able to show us why music may not be their calling.

It was fun watching the BBNaija housemates sing in Biggie’s “Pepsi Know Da Lyrics Task”. Mike, however, caught the attention of the show host, Ebuka Obi-Uchendu, who was perplexed at the sounds coming from Mike’s mouth and he took to his Twitter account, writing, “Mike has finished me.”

Mike has finished me 😩😩

Nigerians also joined the fun on Twitter. Here are some comments gathered:

This is what happens when your mom makes you sing the opening hymn in the family village meeting. 🤣😂🤣🤣😂😂 #teammike #bbnaija pic.twitter.com/aJa4PVSILz

Mike can't sing to save his life, he as scattered and re-arrange, and refix @TeniEntertainer For your case 😂😂😂 pic.twitter.com/tRf0DmEso5

“Mike has content, and that’s all Nigerians want to see. Just be able to add value. Trust me he’ll be in that house till day 99.”

“In mike, I see a man giving in his best to anything. But this mike lyrics shaa. Song na song jare.”

“Mike is totally giving us a remix at that Pepsi music challenge.”

“You’ll watch this thing and begin dey get nightmare… Which kind voices sef be this.”

Mike and ike are sha giving me real joy this night 😂😂😂😂 #bbnaija19 # pic.twitter.com/Hn1gtW97Kw

“Pepsi should have given them something light This people will cause problem for this artist Their songs no go sell again.”

“…you see, Mike singing with all he’s got is the reason why he’s got to stay.”

“Mike is giving me headache, chai see lyrics been murdered…..beht I like the energy.”

Mike's British accent keeps getting in the way of his singing🤣. Now he's singing with Tenor.

Abeg make una vote for am. He's a good guy and deserves to stay longer in the game. #BBNaija #bbnaija19 pic.twitter.com/YmBY9wSCn9

“Mike is not Nigerian in accent but he’s proud of and loves Nigerian music. His energy even though his accent fails him is unmatched. Tacha sounds so flat & many others, it’s funny but E for Effort for my Mcm Mike.”

Mike: Starboy dey for me oooooo

Wizkid: Wetin you talk? Hol am for me joor, so na so you dey butcher my song like malou for abbatoir.#BBNaija #bbnaija19 pic.twitter.com/dH0k020VBc