Tragedy occurred on Tuesday along Omi Adio, Ibadan, axis of the Ibadan- Abeokuta expressway, as a middle-aged pregnant woman was burnt to death in a ghastly motor accident which also left several others with varying decree of burn injuries.

About eight people were said to have sustained severe injuries when they were trapped in the liteace commercial bus coming from Apata to Omi Adio, along the one-lane expressway.

The ill-fated commercial bus, according to eyewitness account developed mechanical problem when its shaft pulled off, causing the driver to lose control and ran into a ditch after somersaulting several times.

However, the confused passengers numbering about ten were in the process of finding their way out of the wrecked bus when it went up in flames, and trapped the occupants. 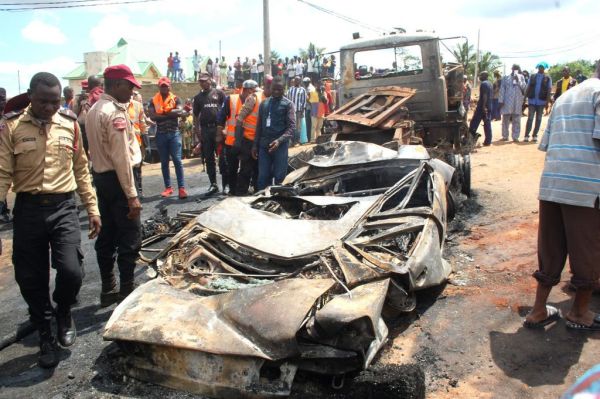 As dozens of sympathisers struggled to rescue the victims, the pregnant woman who was said to seat in the front became unconscious and was unable to escape from the inferno which also caught other passengers in the bus.

A team of officers from the Apata , Ibadan unit of the Federal Road Safety Corp (FRSC), and police officers from the traffic section of the Omi Adio, Ibadan Divisional Police Station were seen assisting sympathisers to evacuate the victims of the accident from the deep valley where the bus pugged.

As at the time of filing this report, the wreckage of the commercial bus was yet to be retrieved from the deep valley, in thick smokes as the bus is still burning.

The injured, with burns, have been rushed to a nearby medical facility, Alaafia hospital, Apata where they were receiving medical attention , while the deceased pregnant woman was said to have deposits at the Adeoyo state hospital morgue , Ring road, Ibadan.

A police source from Omi Adio Police Station, Ibadan attributed the accident to over speeding and lack of maintenance culture among commercial vehicles by operators.

It will be recalled that last week Thursday a similar accident occurred on the same area when the front shaft of a commercial bus went off, while the vehicle was on a high speed, and ran into a deep valley on the Ibadan- Abeokuta expressway.