A French man faces execution under Indonesia’s strict drug laws after he was caught using a false-bottomed suitcase to smuggle narcotics into the Southeast Asian nation, an official said Monday.

Prosecutors have accused Felix Dorfin of trafficking four kilogrammes (8.8 pounds) of cocaine, ecstasy and amphetamines. The 35-year-old from Benthune in northern France was arrested after arriving at Lombok island’s airport from Singapore in September.

“We are charging him with drug possession, carrying drugs to Indonesia from abroad, and trafficking drugs,” lead prosecutor Ginung Pratidina told the court. He faced a potential death sentence if convicted, Pratidina added. Dorfin was read the charges with the aid of an English translator. The Frenchman escaped from jail in late January by sawing through bars on the second-floor window of the prison and rappelling to freedom with a sarong. He spent nearly two weeks on the run before he was captured again in a forest in North Lombok. Police said Dorfin tried to bribe officers to let him go.

A female police officer was arrested for allegedly helping Dorfin escape from jail in exchange for Rp 14.5 million (around $1,000). Indonesia has some of the world’s strictest drug laws — including death penalty sentences for drug traffickers.

It has executed several foreign drug smugglers in the past including Australians Andrew Chan and Myuran Sukumaran, which sparked diplomatic tensions between the two countries. Indonesia has not executed anyone since 2016, but a number of foreigners are still on death row.

Before police detained him, the Frenchman apparently tried to flee through the airport exit and ditch his luggage when Customs wanted to more thoroughly inspect his bags. 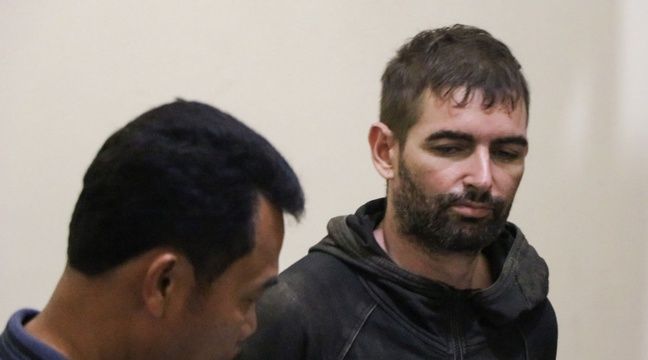 But he was secured by airport security before he could get away, and even after the Frenchman was detained, he allegedly attempted suicide.

“He said, ‘Better I die now than shot if sentenced to death.’ He even had the chance to bang his head on the examination table at the Mataram Customs Office. He was classified as reckless, so we have guarded him tightly,” Mataram Customs daily acting director I Wayan Tapamuka said on Monday,