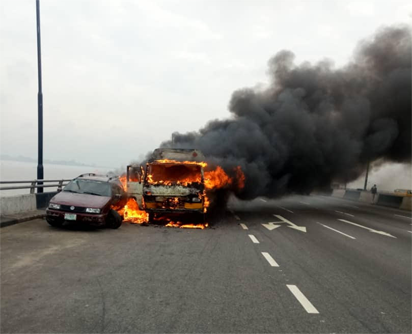 The incident occurred at about 8a.m. at Adekunle axis of the bridge inward Lagos Island, causing traffic gridlock for hours. The inferno was said to have involved an LT volkswagen bus and a stationary Toyota car.

We gathered that one of the occupants of the fully-loaded bus noticed the fire, while the bus was on motion, and raised the alarm. But the driver calmed the occupants and immediately switched off the engine unknown to him it that he had parked near the faulty stationary car, whose driver had gone to look for a mechanic. 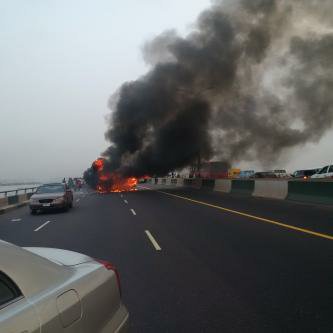 The fire spread to the stationary car. The Volkswagen bus was heading for CMS from Ikeja while the Toyota car broke down and its owner went in search of a mechanic to fix it but unfortunately the inferno had occurred before his returned and all he could do was to start thanking God for his safety and count his losses.

No casualty was recorded but free flow of traffic was disrupted for hours while it took the intervention of Lagos State Service before the inferno was put under control.