A book by a christian Evangelist, Fumilayo Adebayo ,The Game Of Anti-Christ-Exposing the secret behind football, has become a subject of social media frenzy after one user disclosed he was handed the book as gift from a neighbour. 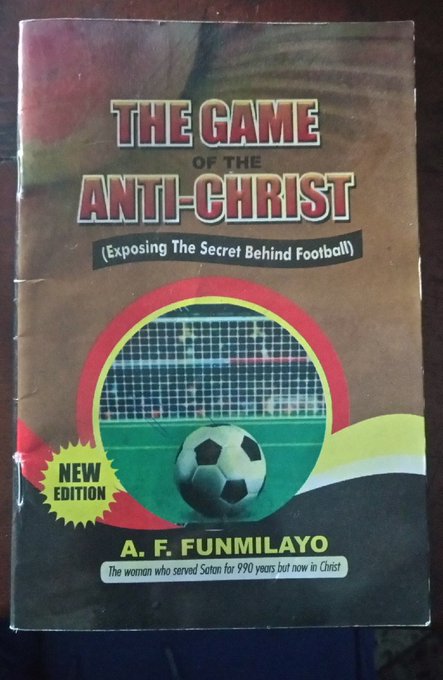 The author who refers to herself as “The woman who serves Satan for 990 years but now in Christ” claims to have exposed the secret behind the game of football.

According to her book, the game is controlled by the biblical Satan and both players and fans of the game were on their way to hell fire.

You can read the book online here

Alex Oluwatobi who is known as @alexlobaloba on the social networking platform brought the attention of his followers to the book in this fashion;

My new neighbor seems not to like me, but I greet them anyways.

In bid to be a little friendly, I asked their 2 sons yesterday the football club they supports. They smiled, shook their heads & pelted upstairs.

Got home this evening, Dad & Mum knocked & gave me this 👇 book. pic.twitter.com/nPTPjn68LY

He went further to share excerpts from the book and that attracted a lot of reactions.
See how people reacted below;

So you served Satan for 990 years and you came back to summarize 990 years in a small book.
You couldn’t even attach quality pictures to the pages.

Even Satan won’t be proud of you.
You spent so much time with him and you couldn’t even narrate it well.
Nobel Laureate Olodo

The woman said she served satan for 990 years, that means people who said methuselah is the oldest were sexist

The woman who served Satan for 990 years, is she immortal or was once immortal? 🤔

Religion won’t let most of you have sense in this life.

So someone in my country served Satan for 990 year’s?
This country is too risky for me.

How do you serve Satan for 990 years?

You served Satan for 990 years and all you brought was evil about football?

You can’t even tell us how you wasted 990 years only to come back empty headed.

What’s your take on this book? Drop your comments below.
2bookEvangelistSatan