President Muhammadu Buhari’s has expressed gratitude to the United Nations for elected a Nigerian, Tijjani Muhammad-Bande as the President of the 74th General Assembly of the Organization. 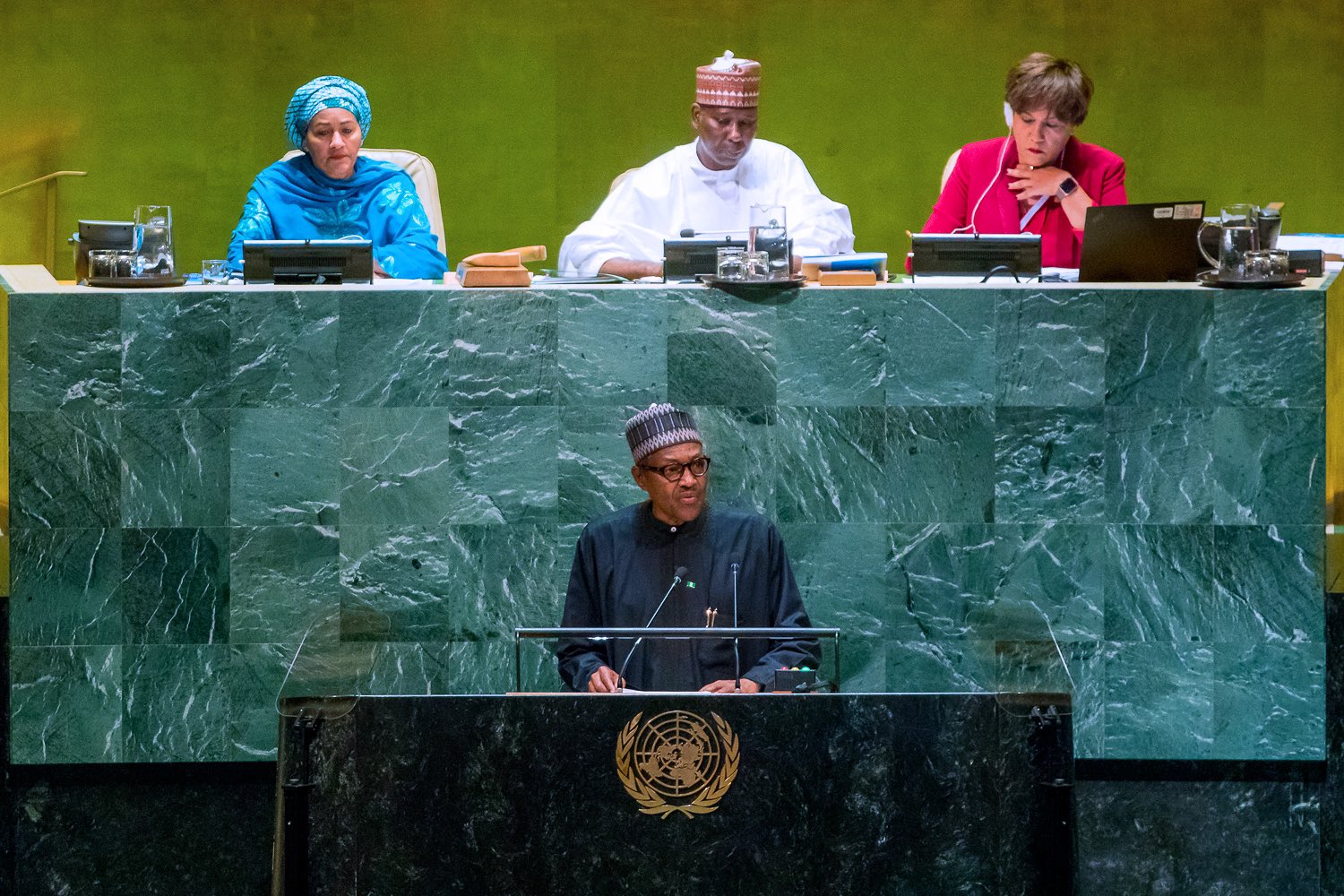 The President made the Speech at the Ongoing United Nations General Assembly in New York, US.

He also spoke about his administration’s move to reduce poverty in Nigeria through the social investment scheme.

Read full Transcript Below Below;

Heads of State and Government,

Firstly I wish to thank the General Assembly for the honour bestowed on the Government and people of Nigeria by electing our national, His Excellency, Tijjani Muhammad-Bande to the Presidency of the 74th Session of this august body.

2. This is indeed a great honour!

3. Nigerians are truly grateful and shall endeavour to live up to the expectations and responsibilities thrust upon us.

4. Ambassador Muhammad-Bande is an experienced and seasoned diplomat and I am confident that he will prove to the International Community his suitability for this most demanding assignment.

5. Let me also offer my sincere thanks to the outgoing President, Her Excellency Maria Fernanda Espinosa Garces for her skill, resourcefulness and endless reservoir of patience in piloting the 73rd General Assembly.

6. In the same vein, may I commend the Secretary General, His Excellency Antonio Guterres for his tremendous energy, his genuine international outlook exhibited by his leadership of the United Nations.

7. The theme of the current General Assembly is: “Galvanising multilateral efforts for poverty eradication, quality education, climate action and inclusion”

8. These are the prime areas calling for collective action which will benefit national and global interests.

9. Today the world is at a critical juncture. This year marks the first anniversary of the International Day of Multilateralism and Diplomacy for Peace. This year also marks the 100 years of the founding of the League of Nations, leading eventually to the establishment of the United Nations as part of the post-World War II international order.

10. Article 1 (4) of the UN Charter called for “harmonising the actions of nations in the attainment of common ends”. These common ends include:

a. International peace and security;

b. Prosperity and social justice;

c. Respect for human dignity; and

d. Protection of the environment.

11. Multilateralism symbolised by the UN system has brought immense benefits to the people of the world. It has saved lives, prevented wars, restored peace and stability as well as generated economic and social progress in many countries.

12. We must admit that as the world grows richer, there are regrettable signals in the World Economic and Political Order. Millions in Africa and around the world remain in abject poverty. Furthermore, we are witnessing a backlash against multilateralism in the shape of rising tide of racism, xenophobia, resurgent nationalism, populism and tendencies towards protectionism and unilateralism. The pristine principles of the United Nations appear threatened.

13. On cessation of hostilities after World War II, the United States in one of the greatest selfless undertakings in history decided to revive Europe through the Marshall Plan and uplift and restore Japan economically. This generous policy catalysed a great economic revival globally.

17. A coordinated multilateral effort should be set in motion to utilise and maximise use of the enormous resources on the African continent for the benefit of all nations. Investing partners will be able to recoup their investments manifold over time.

18. Current attempts to help develop Africa by industrial countries are un-coordinated and plainly incremental. We have the skills, the manpower and the natural resources, but in many instances, we lack the capital – hence my plea for industrial countries to take a long-term view of Africa, come and partner with us to develop the continent for the benefit of all.

19. Africa charges you with the singular task of initiating the effort we are calling for. The United Nations has in place processes for promoting collective action to combat global threats. No threat is more potent than poverty and exclusion.

20. They are the foul source from which common criminality, insurgency, cross-border crimes, human trafficking and its terrible consequences draw their inspiration.

21. Poverty in all its manifestations remains one of the greatest challenges facing our world. Its eradication is an indispensable requirement for achieving sustainable development. In this regard, Nigeria has developed a National Social Investment Programme – a pro-poor scheme that targets the poorest and most vulnerable households in the country.

22. Under this initiative easy access to financial services are facilitated to our traders, artisans, market women and co-operative societies. This type of initiative can help lessen and eventually eliminate mass poverty in Africa.

23. At the core of our efforts to build an inclusive society, our programmes are focused on youth and women empowerment. These programmes aim at ensuring women and youth participation in governance, industry, climate action and agriculture.

24. On the international scene, Mr President, the United Nations has new opportunities to take the lead on issues that continue to cloud the prospects for international peace and prosperity, namely;

b. The risks associated with nuclear proliferation;

25. On climate change Nigeria stands resolutely with the international community in observing agreed carbon emission targets which I signed in 2015. We have since issued two sovereign Green Bonds and have added an additional 1 million hectares of forested land taking our total forest coverage to 6.7% through collective national effort.

26. As we advocate and strive for inclusion within our societies, we must also ensure inclusion prevails in our collective action as members of International Community. That is why we support the expansion of the Security Council to reflect the diversity and dynamics of the 21st Century.

27. From Asia to the Middle East, Africa to South America, violence and the threat of conflict continue to blight the lives of too many people.

28. Our own country is no exception. Nigeria is a nation of nearly 200 million people of diverse groups. Our diversity is our source of strength which is why in elections this year, our people backed the politics of tolerance, inclusion and community over the politics of protest and division.

29. Our election promises emphasised political stability, freedom and prosperity, tackling poverty, schooling our young and providing them with the tools to build better lives. We are placing special emphasis on the role of women in our female gender advancement programmes.

30. Our progress and delivery are deliberate, purposeful and measured. We clearly appreciate there are no quick fixes to complex challenges.

31. In particular, the challenge of education in Africa is enormous. On December 3rd 2018, the General Assembly adopted Resolution 73/25 that proclaimed 24 January of every year as International Day of Education. The Resolution which was spearheaded by Nigeria and co-sponsored by 58 other member states marked a watershed in the recognition of the fundamental role of education in building modern societies.

32. To ensure access to education for all, our Government has introduced the Home Grown School Feeding Programme to address the challenge of out-of-school and forced-out-of-school children.

33. This social intervention programme, Mr President, is aimed at encouraging increased school enrolment through provision of free school meals. The benefits extend beyond the school environment. In addition, we have introduced mainstreaming and implementation of Safe Schools Declaration laws and policies across all educational institutions in Nigeria.

34. The world was shocked and startled by the massacre in New Zealand by a lone gunman taking the lives of 50 worshippers. This and similar crimes which have been fuelled by social media networks risk seeping into the fabric of an emerging digital culture.

35. Major tech companies must be alive to their responsibilities. They cannot be allowed to continue to facilitate the spread of religious, racist, xenophobic and false messages capable of inciting whole communities against each other, leading to loss of many lives. This could tear some countries apart.

37. This is true in the battle against violent extremism, against trafficking in people and drugs and against corruption and money laundering. The present Nigerian government is facing the challenges of corruption head-on. We are giving notice to international criminal groups by the vigorous prosecution of the P&ID scam attempting to cheat Nigeria of billions of dollars.

38. As a young man, as a soldier, I witnessed at first hand the terrible legacy of destruction and broken lives that conflict leaves in its wake.

39. As the 75th Anniversary of the end of the Second World War approaches, I wish to pay tribute to the sacrifice made by so many millions across the globe in defence of freedom, tolerance and the rule of law.

40. In Nigeria, we have made significant strides to put our own house in order. We will work tirelessly to uphold due process. The rule of law remains the permanent, unchanging foundation of the world order.

41. Freedom, tolerance and the rule of law are universal values and underline the best that this General Assembly represents. And that binds us all.

42. I will conclude my remarks by reaffirming Nigeria’s commitment to promoting international peace and security and sustainable development. We are also committed to strengthening partnerships and cooperation with international and regional organisations for the benefit of humanity.