ISLAMIZATION: Why Is Buhari Dragging Us Into Islamic Organizations, Whereas The Constitution states That Nigeria Is A Secular State

Just on Thursday, a day after President Muhammadu Buhari was sworn in for a second term in office, he jetted out of the country, in another foreign trip, this time to participate in a summit of Muslim majority countries. 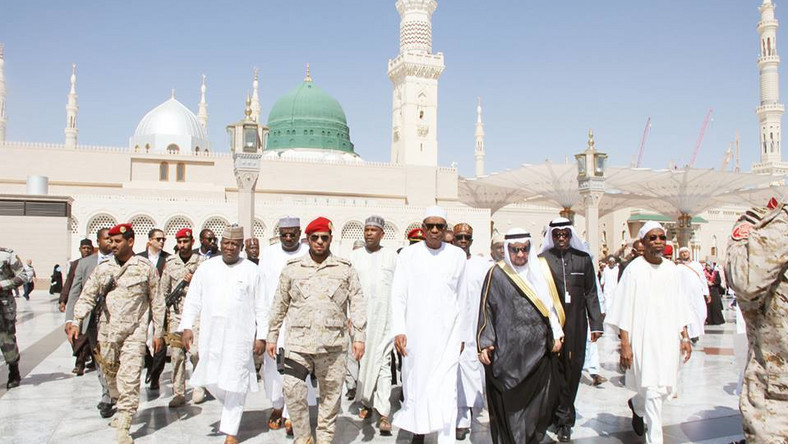 Presently in Saudi Arabia, the president will on Saturday, June 1 (12.00 midnight) join about 53 world leaders in the  the opening of the summit of the Organisation of Islamic Cooperation (OIC). The summit, 14th in its series to be attended by all Heads of State and Governments of Member countries is to be presided over by the Saudi Monarch, King Salman bin Abdulaziz Al Saud.

This latest outing of Mr. President has drawn so much criticism, with one of the most vocal group, being the Ohaneze Ndigbo.

The apex Igbo sociocultural organisation, slammed the President  for attending a meeting of the summit in Saudi Arabia less than 24 hours after his  swearing-in for a second- term.

In a  statement by its Deputy National Publicity Secretary, the group  said Buhari owed Nigerians an explanation.

Ohanaeze said, “Why immediate attendance of Organisation of Islamic Countries, OIC, meeting in Saudi Arabia a day after his swearing in. Mr President Buhari owes Nigerians that explanation.’

Other groups have questioned the decision of the president to attend the summit, which is dominated by Muslim majority countries – as there are no such Organizations attached to other faiths that the country belongs to.

Besides, the 1999 constitution of the Federal Republic of Nigeria as amended, in its section 10 clearly confirms Nigeria as secular state, thereby prohibiting the Government of the Federation or of a State shall to adopt any religion as State Religion.

Section 10 of 1999 Constitution: 10. The Government of the Federation or of a State shall not adopt any religion as State Religion.

“Why is President Buhari dragging Nigeria into an alliance with Organization of Islamic Nations? Is Nigeria an Islamic nation? Why is this Saudi Arabia alliance necessary? This shit irritates me. Section 10 of our constitution is clear. Nigeria is a secular state”

The questions above were raised by social commentator and activist Deji Adeyanju, who could not hold back his contempt for the development and took to his social media to express the view, thus:

Why is President Buhari dragging Nigeria into an alliance with Organization of Islamic Nations?
Is Nigeria an Islamic nation? Why is this Saudi Arabia alliance necessary? This shit irritates me.

Section 10 of our constitution is clear. Nigeria is a secular state.

To compound it, a president who failed to address the Nation in speech upon being sworn, also observed Juma’at prayer at the Grand Mosque in Makkah, Saudi Arabia, with about 53 world leaders and hundreds of thousands of Muslim faithful.

This will be the second time at the Makkah Mosque in less than month, after previously being invited as a special guest for a lesser haj at the same location.

What’s you take on this? Drop your comments below