MUST Read: The Conviction Of Onnoghen Marks The Beginning of A Worrisome Trend In Nigeria -Enumah

Alex Enumah writes that the recent conviction of former Chief Justice of Nigeria, Justice Walter Onnoghen by the Code of Conduct Tribunal signals the beginning of a worrisome trend 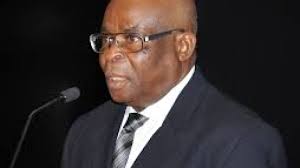 The Code of Conduct Tribunal (CCT) had in a judgment delivered on April 18, 2019 found Onnoghen guilty of all six count charge bordering on failure and false asset declaration charges. While count one of the charge said the former CJN, did not declare his assets between the period 2005 to 2016, when he was appointed Acting CJN, count 2 – 6 of the charge claimed that Onnoghen did not declare five of his accounts with Standard Chartered Bank in his assets declaration forms of 2014. 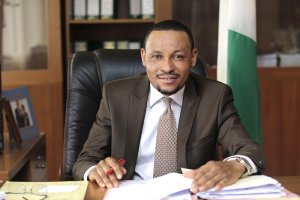 The three-man panel of the tribunal headed by Danladi Umar, held that from the testimonies of the prosecution witnesses and the written statement of Onnoghen to investigators of the Code of Conduct Bureau wherein he admitted that he made a mistake of not declaring the five accounts with the Standard Chartered Bank, Onnoghen was guilty as charged.

The CCB had on January 11, 2019 said to be acting on a petition filed by a non-governmental organisation, the Anti-Corruption and Research-Based Data Initiative (ARDI) and coupled with the said statement by the former CJN had hurriedly package a six-count charge of non-asset declaration and dragged Onnoghen before the CCT for trial.

Though he was initially scheduled for arraignment on January 14, 2019, he was however not arraigned until February 15, 2019, in response to a bench warrant issued for his arrest by the CCT boss on February 13, 2019.

However, exactly three months and four days when the trial commenced, the tribunal concluded its findings and arrived at a guilty verdict against Onnoghen. Consequently, he was removed as CJN, barred from holding any political office for the next 10 years and is to forfeit the monies in the five accounts he was accused of not declaring.

“In the present case, hard facts have been adduced by the prosecution to establish that the defendant is in crystal clear of breach of the CCB provisions and the prosecution has therefore discharged the burden placed on it by law.

“Having examined the case of the prosecution against the defendant, this tribunal has come to a conclusion that the defendant falsely declared his assets as is hereby found guilty of contravention of Section 23 of the CCB/CCT Act.

“It is hereby ordered that the defendant be removed as the Chief Justice of Nigeria and as Chairman of the National Judicial Council.

“He is also barred for 10 years from holding public office while the money in the five undeclared bank accounts is hereby seized and forfeited to the Federal Government, having been illegally acquired, since the defendant did not disclose their sources,” Umar said. 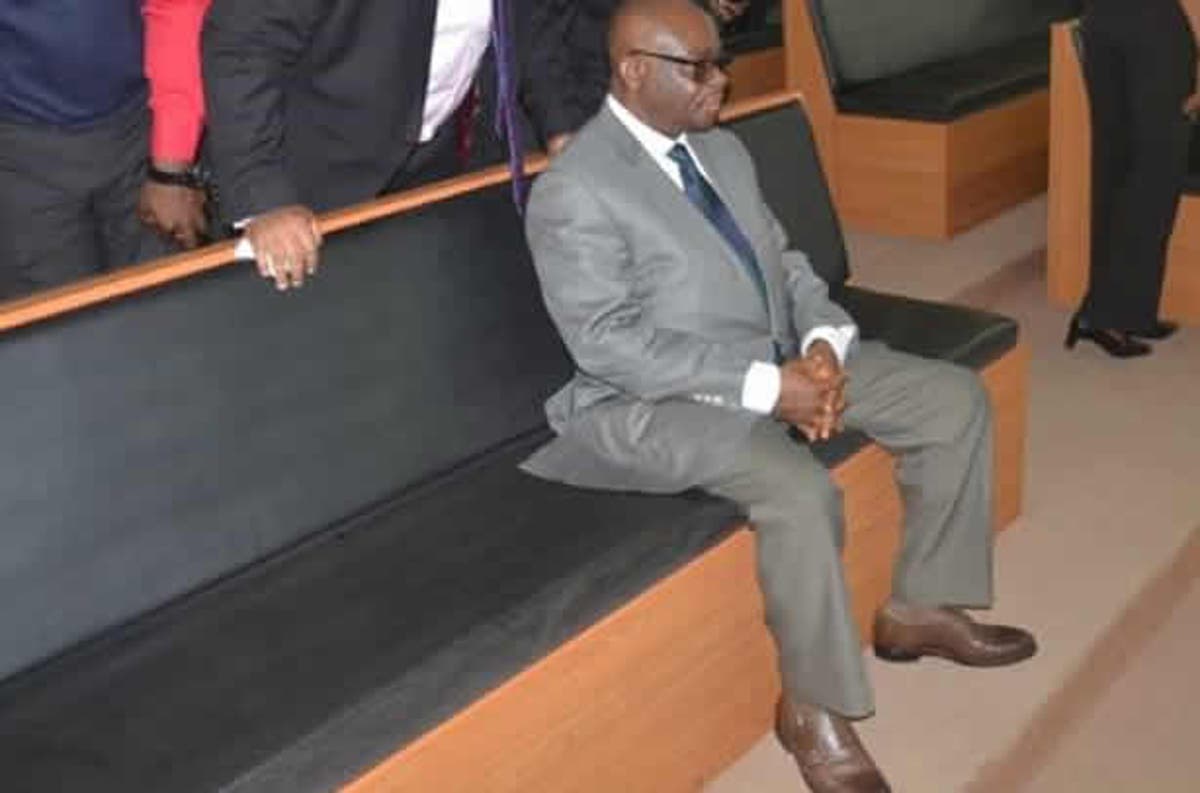 Before the judgment was delivered, the tribunal delivered its ruling on two applications by Onnoghen challenging the jurisdiction of the tribunal to hear the charge, as well as, accusing the Chairman, Danaladi Umar of bias.

However in his ruling, Umar held that the tribunal has jurisdiction to hear the charge, since Onnoghen was arraigned before it as a public officer and not as a judicial officer, adding that the tribunal was not under the obligation of the NJC.

In reversing himself from the earlier decision, Umar held that the constitution cannot be subject to any law or rule of the NJC.

Umar also overruled Onnoghen on the claim that the Chairman of the CCT was bound to be biased in the trial owing to the fact that he is being prosecuted by the EFCC on bribery allegations and that the CCT being under the supervision of the presidency was bound to do the biddings of the prosecution. According to Onnoghen there was no way he could be guaranteed fair hearing in a case against the government where the CCB, CCT and Attorney General of the Federation (AGF) are all under the presidency.

It would be recalled that the same week Onnoghen’s trial was to commence, three courts including the industrial court had issued restraining order on the tribunal, but the tribunal held that the orders of the courts were not binding on it since they were all courts of equal jurisdiction.

Since the very hour the judgment was delivered it has sparked and would continue to generate discussion in public space for some time. To some, the verdict of the tribunal was not surprising, going by the way the charge was framed and the entire proceedings. This group could vow that the judgment was prepared before the trial commenced. They aligned themselves with the position of Okon Efut, SAN, one of the lawyers of the former CJN. 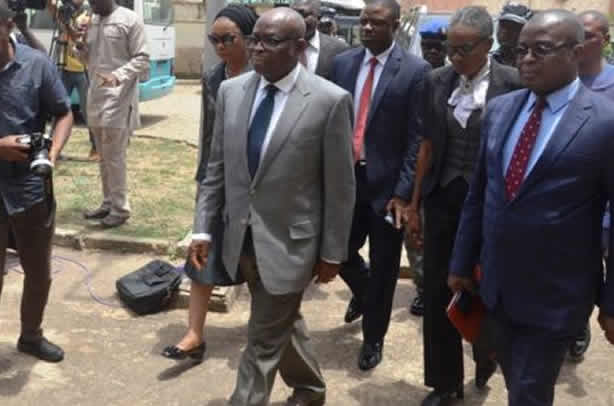 Speaking to journalists shortly after the judgment was delivered; Efut said that the conviction, “was out of order, unconstitutional and a breach of fair hearing because before this day, on January 23, the same judgment has been passed.

“Removing the CJN without a fair hearing was premeditated. Judgment has been passed before today. So, today’s judgment was just a formality and we hold a view that the tribunal has not only breached the constitution of Nigeria, it has also breached the fundamental principles of natural justice, equity and fair hearing and good conscience.”

According to the senior lawyer, Onnoghen was convicted on an offense that he was never charged with. “This is an erosion of the fundamental principle of our constitution and until some questions are answered, for instance, why is that a due course of justice was not allowed to flow? Why was judgment passed on January 23 before today removing the CJN? Why is it that today, even after he has tendered his notice of retirement voluntarily and NJC has taken position, why is it that the tribunal has gone ahead to pass judgment in total disregard of the independence of the NJC and in total disregard to the power of the Senate in this matter,” he queried.

Similarly forming Minister of Aviation, Femi Fani-Kayode reacting to the conviction of Onnoghen for not declaring his in a tweet on Thursday, urged Nigerians to brace up for more surprises. ”The conviction of CJN Onnoghen by the CCT is not surprising. It is part of a wider plan, an unfolding script and a hidden agenda. Nigerians should brace themselves for more. They say a people get the type of government that they deserve. I weep not for Onnoghen, I weep for Nigeria,” he had said.

To the presidency, it was a victory for the anti-corruption war of the President Buhari’s administration. Senior Special Assistant to president Buhari on Media and Publicity, Malam Garba Shehu in his reaction to the conviction insisted that the war against corruption is all encompassing and not designed to persecute anyone for political or other reasons.

Shehu in a statement stressed that the outcome of the trial has sent across the message that the law is no respecter of persons, titles, social or political connections.

“The rule of law will lose its meaning and validity if only the weak, the poor and powerless are punished for their violations of the law.

”Countries succeed because the rule of law is evenly upheld and enforced. The war against corruption would go nowhere if the high and mighty are spared because of their influence and connections.

”You can’t fight corruption by allowing impunity because the rule of law cannot function where impunity is tolerated”, he said.

Shehu assured that the current administration would extend its dragnet against corruption to hold public officials accountable, be they politicians, judges, civil servants or holding positions of public trust.

To others, however, the verdict has further eroded the independence of the judiciary. They described it as sad a situation where one arm of government can easily remove from office a serving official of another arm of government. It is their position that the removal of Onnoghen as CJN by the CCT would further put fear in judges who are expected to be fearless and do justice without fear and favour.

Instead of following the law and their conscience, judges it is argued would henceforth be guided by intimidation particularly from the executive arm of government in matters involving the executive.

To remedy the situation and restore confidence in the judiciary, some however, have advocated for immunity for Heads of Courts both at the federal and state level just as that of the president and governors. Also some have advocated a situation where the CCT is taken away from the influence and manipulation of the presidency and brought under the supervision of the judiciary where its independence can be truly guaranteed.

This same position was earlier canvassed by Onnoghen’s lead counsel, Chief Adegboyega Awomolo, SAN, days before the CCT gave its verdict sacking Onnoghen as CJN. Awomolo in a statement to journalists on April 1, alleged that the judiciary in Nigeria, as at today, is not only weak but vulnerable and not independent.

According to the senior lawyer, “It was unthinkable that the head of the judiciary would be treated the way Onnoghen was treated and not a whimper came from the body of men and women of highest distinction in the legal profession.”

He had stressed that a precedent has been set with Onnoghen and warned that, “Nobody knows who is next”. He however called for the amendment of the constitution to place the Code of Conduct Tribunal under the judiciary to give it its much needed independence, impartiality and to avoid interference from outside the court.