Buhari assented to the N30,000 New Minimum wage bill which had just been passed by the Senator Bukola Saraki led-Nigerian Senate on Thursday. 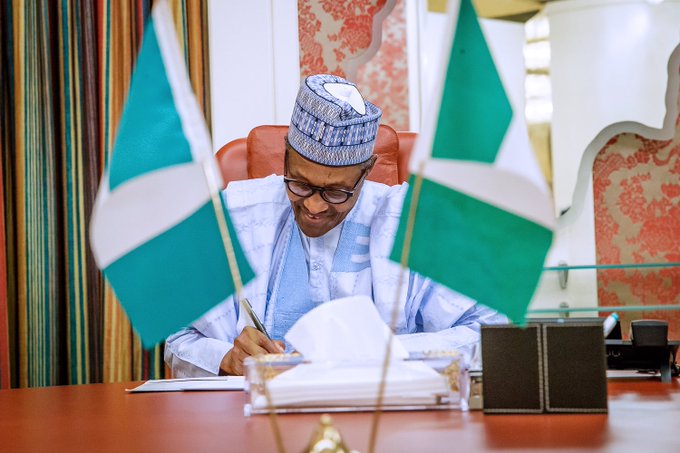 This was made known through a tweet shared on President Buhari’s verified twitter after he signed the Minimum Wage Repeal and Reenactment Bill, 2019 into law.

“I signed the New National Minimum Wage Bill into Law today at the State House, eight years after the last review. I would like to express gratitude to everyone who contributed to this very important task, and reiterate our commitment to the welfare of all Nigerians,” the tweet read.

However, the issue of implementation of the new minimum wage is what they entire country incluing those within the labour force are looking forward to.

In a new development, THE NATION reports that the state governments of Kano, Zamfara, Kwara, Rivers, Kogi and Edo have agreed to pay the new minimum wage of N30,000.

Governor Abdullahi Ganduje said in Kano his administration has given priority to the welfare of civil servants in the state, and that is why it is not owning its workers.

“We are ready to pay N30,000 monthly salary, because the welfare of our workers is paramount to anything and we will always give it. We will pay the N30,000,” he said.

Governor Abdul Aziz Yari Abubakar said in Gusau that  Zamfara State under his watch would do everything possible to ensure the welfare of workers in the state does not suffer.

Yari who spoke through his Senior Special Assistant on Media, Publicity and Public Enlightenment, Malam Ibrahim Dosara said that any state government with the interest of workers at heart will ensure the quick implementation of the new minimum wage.

The Osun State government said it will await guidelines on payment of the N30,000 minimum wage.

The Chief Press Secretary to the state governor, Mr. Adesina Adeniyi, in a telephone chat, said since it is already a law the state will only wait for the implementation guidelines of the minimum wage.

According to him, when the guidelines are released the state will study, understand and eventually go into its implementation.

He said the state governor, Mr. Gboyega Oyetola, is concerned about the welfare of people of the state, including the civil servants, and therefore, will have no difficulty in ensuring that “what is necessary is done at all times.”

According to Governor Abdulfatah Ahmed’s Senior Special Assistant on Media and Communications, Dr Muyideen Akorede, the Kwara State government is also prepared for the payment of the new minimum wage.

Akorede recalled how the state government set up a committee headed by the Head of Service Modupe Susan to work out the modalities and sources of revenue for payment months before the president signed the new into law.

“The committee is expected to submit its report to Governor Ahmed in the next two weeks,” he said.

A similar committee was set up by the Kogi State government and the government says  “laws are made to be obeyed and we are sure the Federal Government will make it convenient for states to pay the new minimum wage.”

It welcomed the signing of the bill into law adding: “a committee was set up to look into the modalities of making compliance easy. Kogi State will work with whatever is agreed by the Governors’ Forum.

“As a government, we will also look inwards to ensure we put smiles on the faces of our civil servants who have shown unprecedented cooperation with our administration.”

The Niger State government is also disposed to paying the new minimum wage.

Governor Abubakar Sani Bello of Niger state has disclosed that it will pay the new minimum wage of N30,000.

Mr. Jide Orintunsin, the  Media and Publicity Coordinator to Governor Abubakar Bello said:”It will be recalled that the state workforce had a 25 per cent salary increase recently. This has placed the state higher than the former minimum wage.

The Delta State government said yesterday it was looking at the law to enable it take an appropriate action.

“We have not read the details of the new law since it was only signed yesterday by Mr. President. When we do we will look at our processes and of course Delta State is not going to be an outcast. We will look at it and take a decision, ” Mr. Charles Aniagwu, the Chief Press Secretary to Governor Ifeanyi Okowa said in Asaba.

He said focus should be on the ability of the organised private sector to pay the new wage structure, while expressing doubts over the ability of many businesses to cope.

“In my opinion, media outfits should be interested in the private sector. How many companies can afford the new minimum wage as the law also binds them,” he said, and expressed fears that the new law might  force many in the organised private sector to lay off workers which may be detrimental to the economy.

The Rivers state Governor Nyesom Wike said  he would comply with the provisions of the new minimum wage law.

Wike who spoke through the Commissioner for Information and Communications, Emma Okah,  a lawyer in Port Harcourt,  the state capital yesterday,  said “Rivers state Government will pay whatever is prescribed as the new minimum wage bill.”

The Special Adviser to Governor Godwin Obaseki on Media and Communication Strategy, Mr. Crusoe Osagie, said  that the new minimum wage would be paid to Edo workers.

Osagie was however silent on when the state government would commence payment.

He said the state government is labour friendly.

Although none of the Cross River State Governor’s aides could be reached yesterday to comment on the issue, Governor Ben Ayade had in January agreed pay the then proposed N30, 000 minimum wage demanded by workers in the country.

The governor had at various times expressed his commitment to the welfare of workers in the state, which many believe is exemplified in the fact that he does not owe workers and pays promptly.

While addressing workers who had embarked on a state wide protest to call for the implementation of the new minimum wage law in the country, Ayade who was represented by the State Commissioner for Local Government Affairs, Hon John Ulafor, had said it was the right step to take.

“This is the right step to take and I wish to thank workers in the state for embarking on a peaceful protest. The new wage is workers right and as a workers friendly government we have always ensured that you get your salaries on time. N30, 000 is all right and the state government will stand with labour in this regard and I wish to assure you that government will ensure that the new wage sails through because it is not beyond the state government to pay. Whatever we need to do extra to ensure that the federal government implements the new minimum wage bill for workers will be done,” Ayade had assured then.