The trial of the suspended Chief Justice of Nigeria (CJN), Justice Walter Onnoghen, which was been on at the Code of Conduct Tribunal (CCT) for the past three month came to an end today with mixed reactions filling the atmosphere.

Onnoghen, appeared in court for the final judgment which was scheduled for today by the Danladi Umar-led panel in high spirits. 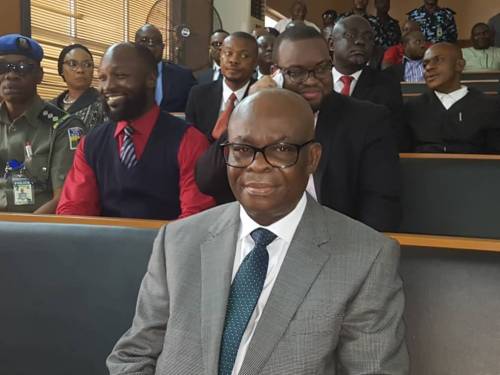 The embattled CJN sat in the front row before the commencement of the trial proceedings today and smiled as numerous photojournalists beamed their cameras on him.

However, when he noticed a particular journalist was bending down while taking his shots, Onnoghen jokingly asked him: “I hope you are not taking my pants.”

It was a remark that sent many in the court into fits of laughter before a policeman came to drive the journalists away.

In the final judgment, the CCT found him guilty of false declaration of assets in breach of the provisions of the Code of Conduct Bureau (CCB) for public officials.

It also said Onnoghen is to forfeit the money in his five bank domiciliary accounts that were not declared to the Nigerian Government because they were acquired illegally, and barred him from holding public office for the next 10 years.

It would be recalled that an official of Standard Chartered Bank, Ifeoma Okeagbue, gave the details of the balances on the five different accounts of the suspended CJN during the trial.

Okeagbue, who is the Team Leader of Priority Banking, as well as Onnoghen’s Relationship Manager at the branch of the bank in Wuse II, Abuja, said all the bank accounts were still active and were opened separately between 2009 and 2010 in euro, pounds, dollar and naira denominations.