The two governors are seeking second tenure on the platform of the ruling All Progressives Congress, APC, and were trailing behind their Peoples Democratic Party, PDP, opponents before the results of election were declared inconclusive. The meeting came barely three days after seven APC governors also met behind the camera with President Muhammadu Buhari at the State House. The agenda of the meeting between the Vice President and the Adamawa and Bauchi State Governors was not made public.

Also on Friday, President Muhammadu Buhari will inaugurate an audit committee on policies, programmes and project which will be headed by Vice-President Yemi Osinbajo. According to a  statement on Wednesday from the Office of the Secretary to the Government of the Federation  signed by the Permanent Secretary (General Services Office), Olusegun Adekunle, the committee is tasked with  the auditing and determining the status of implementation of policies, programmes and projects either inherited or commenced by the out-going administration. 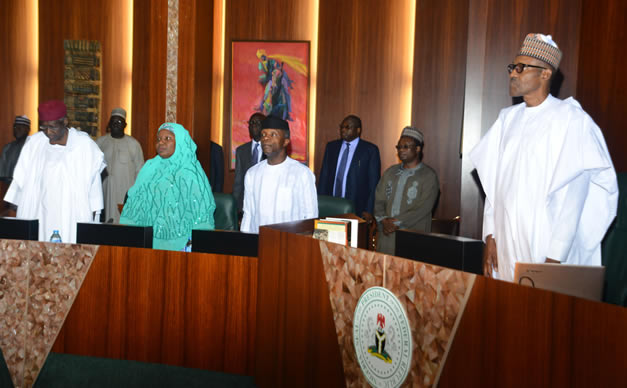 The committee is also to prepare and produce a detailed working document that will guide the incoming cabinet members on the direction of government regarding policies, programmes and projects.

The statement added that the committee would “identify and highlight a residue of work and challenges that might  militate against successful implementation of policies, projects and programmes of government.” Members  of the committee  are the  Chief of Staff to the President, Head of Civil Service of the Federation, Minister of Budget and National Planning, Minister of Finance, Minister of Power, Works and Housing, Attorney General and Minister of Justice, Minister of Industry, Trade and Investment as well as the Minister of Transportation.

Others are the Minister of Agriculture and Rural Development, Minister of Water Resources, Governor of the Central Bank of Nigeria, National Security Adviser and Permanent Secretary, Cabinet Affairs Office.