The people’s Democratic Party in Abia State has been dealt a blow following the resignation of a top party official.

He defected to the All Progressives Congress (APC). 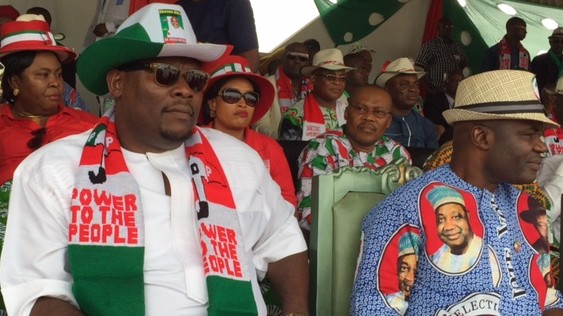 Nwogu made this known in a letter addressed to the Abia chairman of PDP, Chief Johnson Onuigbo, and forwarded to DAILY POST on Monday evening.

He cited political rancour and intimidation in the local government area chapter of the party as reasons he and thousands of other PDP members and supporters defected to the APC.

The ex-PDP chieftain, is a known political associate of the immediate past Speaker of Abia House of Assembly and Deputy Governorship candidate of the APC, Rt. Hon. Martins Azubuike.

Part of the letter reads, “I wish to thank the PDP for the opportunity given me to serve as the Isiala Ngwa North chapter chairman for number of years, but wish to notify you of my decision to quit my as the chairman of the party due to some political distrust, intimidation and alienation orchestrating disunity, backbiting and political rancour in Isiala Ngwa North LGA despite my efforts”.

Meanwhile, Dr. Alex Otti, a major contender for the office of Governor of Abia State on the ticket of the All Progressives Grand Alliance (APGA) has vowed to bring unprecedented development to the state, if he wins the March 2, 2019 election.

Promising to transform the state into the Dubai of Africa, he told a group of APGA stakeholders from Obingwa Local Government Area that the incumbent governor and candidate of the PDP, Governor Okezie Ikpeazu, was lacking in vision and capacity to govern and to move Abia forward and therefore does not deserve a second term in office.

“Our people, it is time we all rise up and say again, ‘enough is enough’,” he said. “We cannot continue to allow evil to thrive. Twenty years is enough time for a system to change. For 20 years, PDP has ruled Abia State and for 20 years they have failed woefully. Enough is Enough,” he sounded off.

Otti’s admonition came on the heels of the flag-off of his gubernatorial campaign in Umuahia, last week.

Otti, an economist and successful former bank chief executive, promised to build “a new Abia State” that the people would be proud of, if they vote for him in the March 2, 2019 governorship election. “I urge you to join hands with us and rescue our dearly beloved state; for our sake, for the sake of our children and for posterity,” he appealed.

The APGA governorship candidate told his guests that if elected into office, he would guarantee free and compulsory education for Abia citizens up to secondary school level; promote sports and culture as a vehicle to creating jobs and recreation for the youth; make the state safe and secure; establish the Abia Safety Net, a social welfare scheme designed to cater for the aged, widows and the poor; establish and operate an accountable and transparent government that the people can trust; make payment of workers’ salaries a first item in the budget and generally transform Abia State to the Dubai of Africa, among other promises.

“I will build a new Abia State which will be a pride of all of us. I urge you to join hands with us and rescue our dearly beloved state; for our sake, for the sake of our children and for posterity”, he appealed.
In another development, Otti described the purported promise by the Okezie Ikpeazu government to complete the long abandoned Osisioma flyover in January of 2019, as a ruse.

Speaking through Mr. Kazie Uko, director of media and publicity, Alex Otti Campaign Organisation, he dismissed the announcement as an attempt by the government to pull wool over the eyes of Abia people, with elections fast approaching.

“We shall wait and see”, Otti retorted, when prompted for his reaction. “January is just around the corner, it is just about two weeks from now, that is if it is January 2019, they mean,” he quipped.

The Abia State Commissioner for Information, John Okeiyi, had informed some online news media that the project which started sometime January 2017, was billed for completion in early 2019. According to him the project has a 24-month duration and therefore will be completed January 2019. He claimed the project was running within schedule.

The Osisioma flyover remains a subject of controversy between the Federal Government and the Abia State Government, over right of way, as the bridge is being erected over the Enugu-Aba-Port Harcourt Expressway, a federal road.

Dismissing the capacity of the Okezie Ikpeazu’s PDP-led government to engender any meaningful development in Abia State, within the short period left in its lifespan, Otto appealed to Abia indigenes to remain patient, as the “in-coming” APGA government has a clear programme to move the state forward.

“The people of Abia State are suffering in pains and sorrow. There is no development. There are no motorable roads. Markets are not developed. Infrastructure is in bad shape. Everywhere you go, Abia looks like a war zone, whilst our neighbours look different. Go to Anambra State, go to Enugu State, go to Ebonyi State of yesterday and you will see what is called meaningful development. But God has heard the cries of Abia people. That is why, I, Alex Otti and APGA, have stepped forward to lead our people to the Promised Land”, he declared.