Bola Tinubu, a national leader of the All Progressives Congress (APC), has dismissed the threat posed by Atiku Abubakar, former vice-president and president candidate of the Peoples Democratic Party (PDP).

After meeting with President Muhammadu Buhari on Wednesday, Tinubu was asked if he is jittery about the strategy meeting convened by Atiku in Dubai, UAE, to unseat Buhari.

“We don’t fear. Whether it is in the jungle, or it is in Dubai or it is in Abu Dhabi, people are free to meet and strategise in anyway they want but we are not going back to the illusion of the PDP,” he replied.

“It is not possible, Nigerians will not do that. They say slow and steady wins the race. We inherited that from our forefathers and knowledgeable people. We can’t go back to the pit that we inherited for 16 years. They can strategise from anywhere but a leopard cannot change it skin.”

His political career began in 1992, on the platform of the Social Democratic Party (where he was a member of the faction of the Peoples Front led by Shehu Musa Yar’Adua and made up of other politicians such as Dapo Sarumi and Yomi Edu). He was elected to the Nigerian Senate, representing the Lagos West constituency in the short-lived Nigerian Third Republic.

After the results of the 12 June 1993 presidential elections were annulled, Tinubu became a founding member of the pro-democracy National Democratic Coalition, a group which mobilized support for the restoration of democracy and recognition of the results of the 12th of June. He went into exile in 1994 and returned to the country in 1998 after the death of the military dictator Sani Abacha, which ushered in a transition to civilian rule. 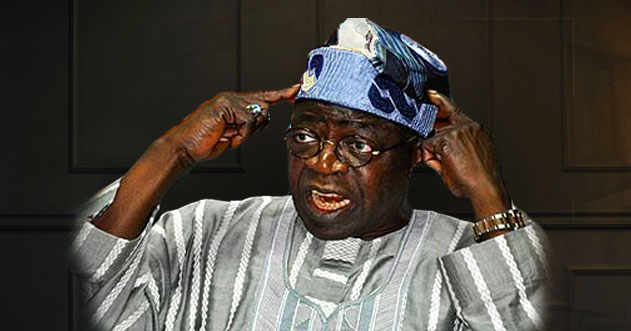 In the run-up to the 1999 elections, Bola Tinubu was a protégé of Alliance for Democracy (AD) leaders Abraham Adesanya and Ayo Adebanjo. He won the AD primaries for the Lagos State gubernatorial elections in competition with Funsho Williams and Wahab Dosunmu, a former Minister of Works and Housing. In January 1999, he stood for the position of Executive Governor of Lagos State on the AD ticket and was elected

In April 2007, after the elections but before the new governor had taken over, the Federal Government brought Asiwaju Bola Tinubu before the Code of Conduct Tribunal for trial over the alleged illegal operation of 16 separate foreign accounts. In January 2009, the Economic and Financial Crimes Commission cleared Bola Tinubu and governors James Ibori of Delta State and Obong Victor Attah of Akwa Ibom State of charges of conspiracy, money laundering, abuse of office and official corruption in relation to a sale of V-mobile network shares in 2004.

In September 2009, however, there were reports that the British Metropolitan Police were investigating a transaction in which the Lagos State government made an investment in Econet (now Airtel). Bola Tinubu said the transaction was straightforward and profitable to the state, with no intermediaries involved.

The Federal Government rejected a request by Britain to release evidence needed for further investigation and prosecution of the three Nigerian ex-governors in a London court. In March 2009, there were reports that a plot had been identified to kill Chief Bola Tinubu. The Alliance for Democracy called on the Inspector General of Police, Mike Okiro, to conduct a thorough investigation.

Following the victory of the People’s Democratic Party in the April 2007 elections, Bola Tinubu was active in negotiations to bring together the fragmented opposition parties into a “mega-party” capable of challenging the PDP in 2011.

In July 2009, he called for implementation of electoral reforms spelled out in the Uwais report to ensure that the 2011 elections would be as free and fair as the elections of 1993 had been.In December 2009, there were reports that Babatunde Fashola and Bola Tinubu had fallen out over the issue of whether Fashola should run for reelection in 2011, with Tinubu said to be supporting the commissioner for environment, Muiz Banire. Tinubu later bowed to pressure and supported Fashola’s candidature which had been adjudged by the public as good. Another scuffle on the successor of Fashola put Tinubu against him in 2015. Fashola later relented and threw his full weight behind Akinwunmi Ambode, the then gubernatorial candidate of the APC, who later succeeded him.