Obasanjo  once knew too much about Atiku Abubakar. Whatever it was he knew was so abominable he feared the wrath of the gods if he dared support Atiku’s quest to be president of Nigeria.   Atiku  had dismissed  egotistical Obasanjo and his accusations. He said Obasanjo’s vendetta was the price he had to pay for stopping Obasanjo from becoming another Paul Biya.

And you would be forgiven if you thought  Atiku  had no need  then for Obasanjo’s forgiveness.  Pa Adebanjo thought so too, four months ago. It’s unlikely Pa Adebanjo believed that  Atiku was exactly incorruptible.

He was however certain   Obasanjo’s apparent righteousness  defied evidence.  In his book published a few months ago he described Obasanjo as a living pharisee who had no moral right to deem anyone corrupt let alone pretend to possess cleansing power. But a few days ago, Pa Adebanjo,  in broad daylight  took Pa Atiku to Ota so that he could be cleansed of his sins. Atiku maintains he  never suffered from the political leprosy Obasanjo had diagnosed in him. But he turned up for cleansing anyway.

In the sermon preached at that River Jordan in Ota  that day, Obasanjo reconfirmed Atiku’s sinful state. He advised the  newly cleansed man to brace up for the consequences of known  skeletons  sticking out of his cupboards.

And to prepare to cope with the ghosts of yet to be exhumed iniquities. If Bishop Kukah hadn’t let the cat out of the bag  we would have  believed the Ota ceremony  was a thoughtfully planned event.   Obasanjo had promised the nation too much and embarrassment was starring him in the face.. Obasanjo had assembled PDP bigwigs.  He assembled Afenifere chieftains.  He brought in  one influential pastor.

The spiritual reconciliation of two elderly men  became a political jamboree where Atiku would be endorsed by Obasanjo, Afenifere and  almost everyone else  present. Obasanjo had taken  new  political captive in Buhari. So he was ready to let go one  real or imagined Barabbas. Atiku Campaign Organisation disowns online grant scheme But why was Obasanjo in such a haste?

Obasanjo had in January written Buhari and advised him to resign. In that letter he described the two main parties as wobbly useless parties. He said Nigeria was doomed except a third force intervened. He promised to lead a brigade of Angels and patriots  to rescue the country from  calamitous drift. Many people believed him. 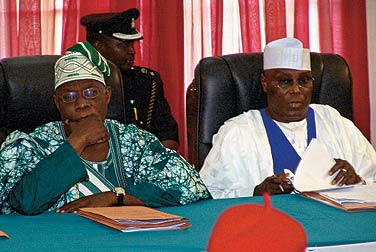 And waited to see a Nigerian Redemption Force. But they only saw  Olagunsoye Oyinlola and a few others run helter skelter,  and then  hold meaningless meetings. A few others jumped out with righteous indignation  and poured opprobrium on the two main parties before forming  new parties. They hoped that in due season these parties would coalesce and ‘operation rescue’ would begin with international support. 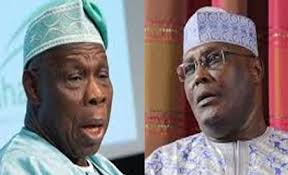 Oby Ezekwesili championed the Red Card brigade. She must have believed Obasanjo too. Others similarly propelled by a renewed idealism formed the Nigeria Intervention Movement. The nation yearned for a new beginning.  Wole Soyinka who has known Obasanjo since Lord Lugard  smirked.  He  said  Obasanjo wasn’t capable of a moral enterprise.

Perhaps he  foretold what  was to come. Bishop slams political parties, politicians for lack of ideology, manifestos Many months after Obasanjo promised a rescue coalition, nothing that could save a big village happened. Obasanjo went into a literal hibernation. When he came to the surface  occasionally he didn’t mention the coming of any force.  The same Atiku whom he had discarded as irredeemably politically  deformed.

That day he rechristened him an economist, an expert in job creation. We  need not to ask Obasanjo where his coalition is. He has adopted the  kabukabu which a few months ago he  had deemed  overdue for the junk yard. The PDP  has become the third force which Obasanjo promised. Bishop Kukah wants Obasanjo to go to heaven. He may have  one more  reconciliation to achieve. He  may have to beg the country to forgive Obasanjo for promising a brand new vehicle and delivering a  ‘kabukabu.’