A pan-Yoruba group, Yoruba Youth Forum, has condemned the rule of the All Progressives Congress (APC) and the administration of President Muhammadu Buhari for not fulfilling their campaign promises and mishandling the country’s economy.

The group also commended former President Olusegun Obasanjo for forgiving his the presidential candidate of the Peoples Democratic Party (PDP) of all his wrongdoings as well as endorsing his 2019 presidential bid.

The YYF claimed Obasanjo has shown himself to be a true Nigerian leader by forgiving Atiku. It then added it was obvious the move by the Ebora Owu was in the country’s interest because “the majority of Nigerians are already tired of the APC-led government which has failed to deliver despite the massive supports by Nigerians.”

The YYF made this known in a statement released on Monday by its Chairman, Olusegun Bolarinwa.
It said, “We want to specifically thank former President Olusegun Obasanjo for finally accepting the apology of his former deputy in the interest of Nigerians. Many Nigerian voted for the APC because they thought the party would be able to improve their lives but today the party has made a mess of every sector of our national life.

“The economy today is in a total mess. During the electioneering period, President Muhammadu Buhari and his party, APC, made promises which many of us believed. Some of us believed in those promises not because we were fools but because those promises came from Buhari, a man we once vouched for his integrity.

“But today, Mr President, none of those promises has been fulfilled. Nigeria has fared badly under President Buhari.”

The Yoruba group claimed that under the Buhari government, the nation’s economy had become “a ravaging bull running amok and has defied any solution from the government.”

“Majority of Nigerians have become hopeless in the face of the economic hardship that has plagued the nation since Buhari took over the mantle of leadership of this great nation. The vicious cycle of poverty now engulfs the masses to a level of suffocation,” the group added.

In other related news, the senatorial candidate of the Peoples Democratic Party (PDP), Adamawa Central, Murtala Modibbo, has said Obasanjo’s U-turn and endorsement of Atiku is a sign that the administration of Buhari has failed Nigerians. 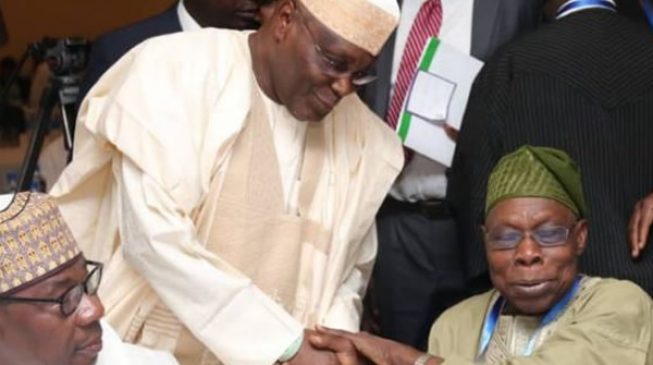 Modibbo said, “It goes to show that the administration has failed completely. I think the endorsement of former President Olusegun Obasanjo and other religious leaders goes to confirm the level of dissatisfaction among the elite for the administration. If these same people who endorsed him (Buhari) over three years ago are now the same persons making a U-turn, it speaks volume about the character of the current government that is now in power.”

Recall that last week Thursday, Obasanjo said he had reviewed his stance on not backing his former deputy for the presidency of Nigeria. Mr. Obasanjo spoke when Atiku Abubakar and leaders of the Peoples Democratic Party visited him at his Abeokuta home.

He said he believed Atiku has ‘re-discovered and re-positioned himself’ and is now good enough to enjoy his support in the next election.
Mr. Obasanjo said, “Let me start by congratulating President-to-be, Atiku Abubakar, for his success at the recent PDP Primary and I took note of his gracious remarks in his acceptance speech that it all started here.

“Yes, when it started, it was meant for Atiku to succeed Obasanjo. In the presence of these distinguished leaders of goodwill today, let me say it openly that we have reviewed what went wrong on the side of Atiku. And in all honesty, my former Vice-President has re-discovered and re-positioned himself. As I have repeatedly said, it is not so much what you did against me that was the issue but what you did against the Party, the Government and the country.
#2019GeneralElectionsAtiku AbubakarMuhammadu BuhariYoruba