FAYEMI RECEIVES A CERTIFICATE OF RETURN FROM INEC

The Ekiti State Governor-elect, Dr Kayode Fayemi, on Wednesday, received his Certificate of Return from the Independent National Electoral Commission. The National Commissioner in charge of Oyo, Ekiti and Osun states, Prince Adedeji Soyebi, presented the certificate to him at a ceremony held at the state’s INEC office in Ado-Ekiti, the state capital.

Fayemi of the All Progressives Congress won the Saturday’s governorship election by defeating the candidate of the Peoples Democratic Party, Prof. Kolapo Olusola. His running mate, Otunba Bisi Egbeyemi, also received his Certificate of Return at the event.

The immediate past Minister of Steel and Mines Development commended the electoral body for doing what he described as an “excellent job” in the conduct of the “seamless, free, fair, credible and violence-free,” election. 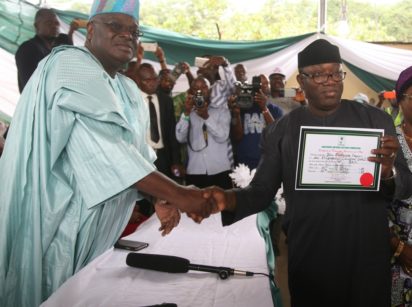 The Resident Electoral Commissioner, Prof Abdulganiyu Raji, said he was happy that the election took place despite the tension in town. Fayemi gave the assurance in Ado-Ekiti shortly after he received the Certificate of Return as the governor-elect from the Independent National Electoral Commission (INEC).

The INEC National Commissioner in charge of Oyo, Ekiti and Osun, Mr Adedeji Soyebi, presented the certificate to him at the commission’s office, Ado-Ekiti. The Deputy Governor-elect, Otunba Bisi Egbeyemi, also received his Certificate of Return at the ceremony.

Fayemi said that the people of the story would enjoy the benefit of good governance from Oct. 16 when he would take over power. He commended INEC for doing what he described as “excellent job” in the conduct of the governorship poll. Contrary to the claims of ruling Peoples Democratic Party (PDP), Fayemi said that the Saturday election was “seamless, free, fair, credible and violence-free”. He stressed that INEC did a good job in delivering the election in a credible and professional manner in spite of fears expressed in the build-up to the poll.

The governor-elect also commended security agencies for their services during the exercise, saying that their presence gave the electorate confidence to come out and exercise their franchise. He hailed the APC National Working Committee (NWC) led by the National Chairman, Mr Adams Oshiomhole and the Executive Committee of the party in Ekiti led by the Chairman, Chief Olajide Awe. The Resident Electoral Commissioner in the state, Prof. Abdul-Ganiyu Raji, expressed delight that the election was held in spite of the tension that preceded it. Raji commended the people of the state for the maturity displayed before, during and after the election.

According to him, Ekiti is moving higher with the outcome of the election. In his remarks, Soyebi noted that the presentation of the Certificate of Return marked the end of the process of the governorship election in the state.

Soyebi, who described Ekiti as a homogeneous state, urged the people to continue being their brother’s keeper. He said: “Today marks the end of the election in Ekiti State on the part of the commission which is the presentation of Certificates of Return to the governor-elect and the deputy governor-elect.

“If there are issues arising from the election, there is another arm of government that will take care of that. This is another important day in the history of the state. “On behalf of the commission, I congratulate everybody. Ekiti has pointed the way forward in conducting elections in Nigeria.”