The photos of a South African man and woman laughing gleefully as they leave with items looted from a foreigner’s shop has been shared on the internet. It was free for all for looters in Turffontein on Monday,  as stores owned by foreigners were looted.

According to confirmed reports, over  70 suspects have been arrested in Johannesburg, Pretoria, Xenophobic violence unacceptable, says President . 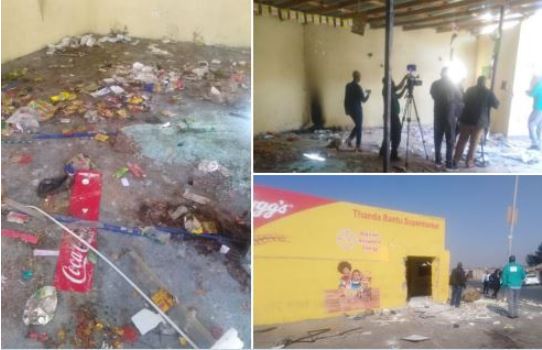 The South African government said it has arrested 70 suspects in connection with the xenophobic attacks on Nigerians and other foreign nationals. The suspects were nabbed in Johannesburg and Pretoria while looting property belonging to foreigners.

The acting South African High Commissioner to Nigeria, Bobby Moroe, disclosed this during a meeting with the Minister of Foreign Affairs, Geoffrey Onyema, in Abuja, today.

He explained that the attackers also burnt down Shoprite and Spar, noting that the SA government “has risen to the occasion.”

Attacks on businesses run by “foreign nationals is something totally unacceptable, something that we cannot allow to happen in South Africa,” Ramaphosa said in a video address diffused on Twitter.