See How Heartbreak Is Sending Young Nigerians To Early Grave

In recent times, suicide among youths and young adults has been on the increase. In Nigeria where taking one’s life is seen as a taboo and curse, the option to snuff the life out of one’s self is becoming a worrisome trend, especially with reoccurring cases both in the rural areas and cities. The cases cut across students in tertiary institutions, young and energetic people from all spheres of life among other groups of people.

According to the World Health Organization (WHO), an average of 3,000 people commit suicide daily all over the world and for every person who completes a suicide, 20 or more may attempt to end their lives making it the third leading cause of death among the youth aged 15-44 in the world. Further more, the World Health Organization estimated that 800,000 people die by suicide annually and Nigeria now ranks among the top suicide prone countries. Also, according to the World Population Review, Nigeria, with a crude suicide rate of 9.5 per 100, 000 population ranks 10th in Africa and 67th in the world.

Depression, which is a serious problem for adolescents, is one of the significant biological and psychological risk factors for youth suicide and substance use remains extremely widespread among today’s youths and is related to both suicide mission and depression. Over the past few months, we’ve been hearing about different suicide cases day in day out. This has become a very worrisome issue to Nigerians and the entire nation as a whole. But what baffles everyone the most is why it is most prevalent among youths, especially undergraduates of higher institutions. These are people who haven’t even started facing the real hardships and challenges of life and they are already ending their lives, even before it begun.

Sadly, another suicide occurred on Thursday, 30th May, 2019. Coming off as the latest in the series of the youths suicide epidemic in the country,  King Ezekiel Joseph Mayowa, a student of Lagos State Polytechnic, Ikorodu campus, reportedly ended it on the fateful Thursday night after he gulped a full bottle of SNIPER insecticide which is what most of the Nigerian youths who have committed in recent times used to take their lives. 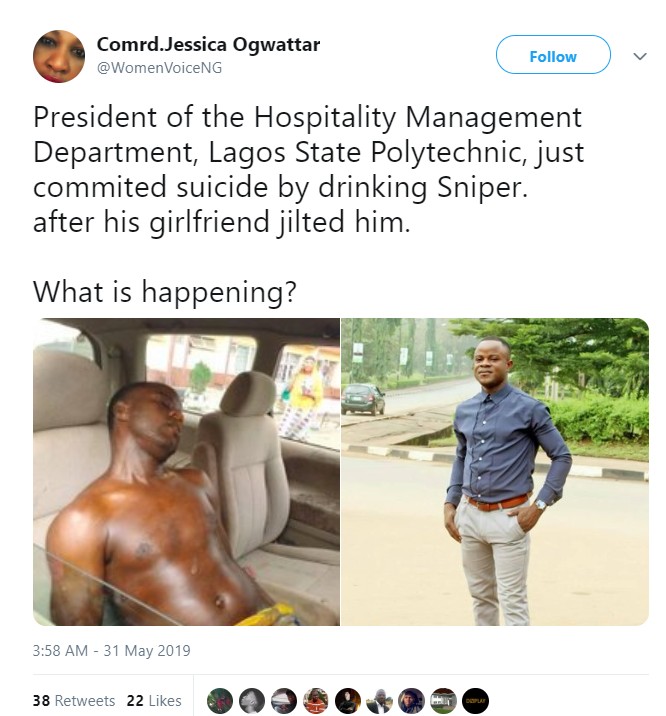 The HND2  President of the Department of Hospitality Management drank the substance after his lover of 9 years ended the relationship. In a video clip which immediately went viral after his death, Mayowa was seen dangling a bottle of sniper in his hand while crying in his room, at the Ikorodu campus (see video below).

He complained about how he lost his girlfriend to a rich man she met when she went for her National Youth Service Corp and called on men to ensure they had money before dating any girl. He wanted the Nigerian Government to scrap the NYSC scheme and apologized to his mother for taking such action. He also mentioned some persons names, saying he would miss them. 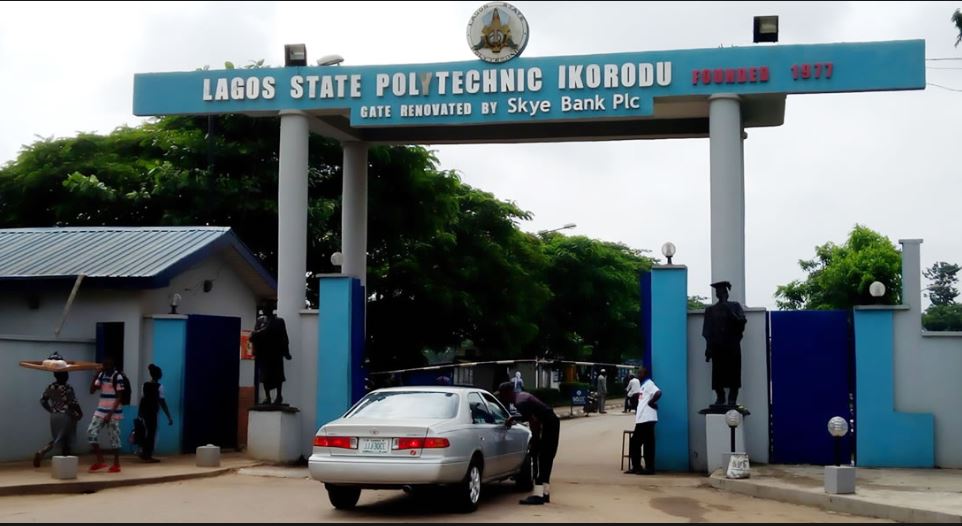 Olarewaju Kuye, the school’s spokesman confirmed the incident. The Lagos State Police Public Relations Officer, DSP Elkana Bala, also confirmed the incident and gave the identity of the girlfriend as Olokodana Bolaji. Bala, in a statement issued on May 31, 2019 said, “At about 5.30am, May 31, 2019, Shagamu Road Police Station, Ikorodu received an information that one Joseph Mayowa, 34, a regular student of Lagos State Polytechnic, Ikorodu Campus, Department of Hospitality Management Technology, drank a poisonous chemical identified as sniper, following a misunderstanding between him and his girlfriend, Olokodana Bolaji, who was also a graduate of the same Institution.” 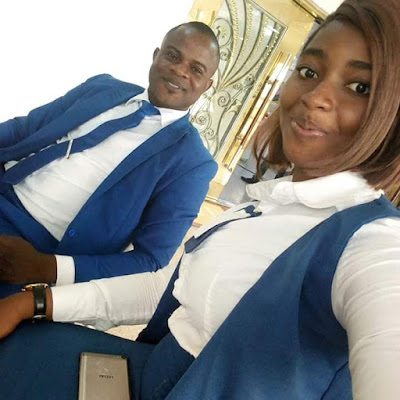 “He was rushed to hospital by his neighbours following an alarm raised by his girlfriend but eventually died “In the statement of his girlfriend, she told Police investigators that herself and the deceased dated for nine years. That the deceased is fond of beating her. That while she was with the deceased in his room, they had a quarrel and he, as usual, resorted into physical violence. That she ran into the restroom and upon return she found him gasping for breath with an empty bottle of sniper beside him. Homicide detectives from the State Criminal Investigation Department, Yaba visited the scene at Eyita area, Ikorodu. The corpse of the said Joseph Mayowa was deposited at General hospital mortuary for autopsy while the girlfriend was invited for questioning. An investigation is ongoing to determine whether it was actually a suicide case or murder,” said the police PRO, Bala Elkana. 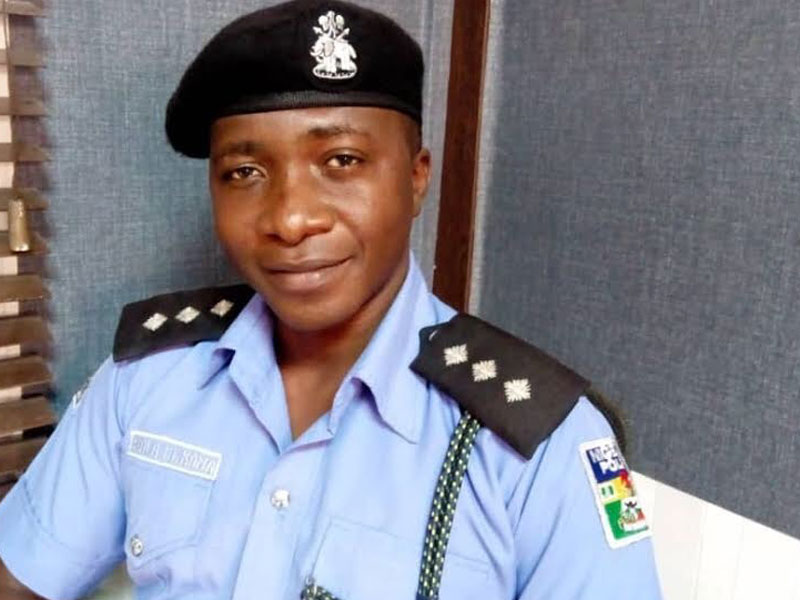 From the incident above, it seems the suicide trend among youths, especially undergraduates is still ongoing just when we thought an end had come to it after all the series of suicide cases that were recorded over the months. Despite the whole campaign against suicide on social media, TV, radio and other news channels, it is just so sad that youths are still thinking and committing suicide.

Among the different risk factors for suicide identified by researchers, relationship or marital problems seem to stand out in particular.  Not only are people dealing with relationship abuse or emotional conflict at particular risk for suicide attempts, but studies also show that terminating a relationship can boost suicide risk as well.  In the same way that being in a committed relationship helps protect against stress or depression, this same sense of commitment may become dangerous once  that relationship dissolves.  Since any romantic relationship requires a significant investment of time, emotional bonding, shared friendship, and property, the sudden end of any relationship can have serious consequences.

According to attachment theory, the attachment adults feel towards their romantic partners greatly resembles the attachment an infant feels for his/her mother.  For example, people look to their romantic partners for security, comfort, and close physical contact.  In fact, adults who have been in a long-term committed relationship often find that all other emotional bonds  become less important. As a result, this kind of relationship bond becomes an essential part of their sense of identity, especially in relationships lasting for many years.   And so, when the relationship ends, it means losing the sense of identity and security that a committed relationship provides.  Not only do they become emotionally vulnerable and depressed, they may also be at greater risk for suicide.

The thing with suicide is, people who take their lives don’t want to die, they just want to stop hurting. Most suicidal people are not psychotic or insane. They are upset, grief-stricken, depressed or despairing, but extreme distress and emotional pain are not necessarily signs of mental illness. Almost everyone who attempts suicide has given some clue or warning. Don’t ignore even indirect references to death or suicide. Statements like “You’ll be sorry when I’m gone,” “I can’t see any way out,” no matter how casually or jokingly said, may indicate serious suicidal feelings. 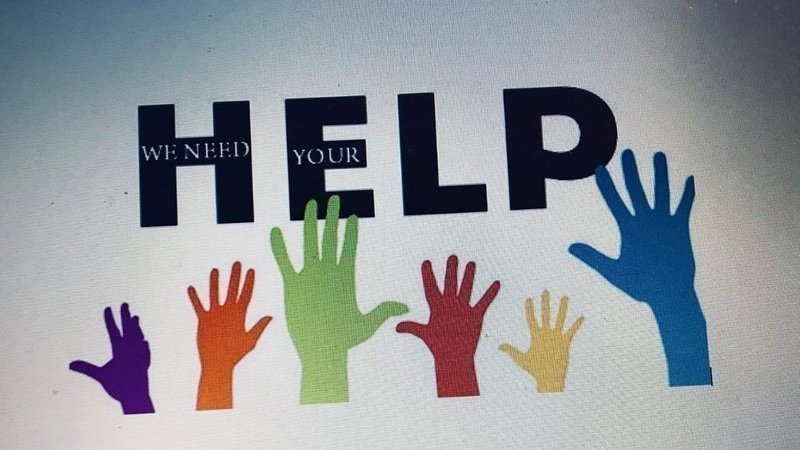 Suicide prevention starts with recognizing the warning signs and taking them seriously. If you think a friend or family member is considering suicide, you might be afraid to bring up the subject. But talking openly about suicidal thoughts and feelings can save a life. The World Suicide Prevention Day celebrated on the 10th of September every year promotes worldwide commitment and actions to prevent suicides. Let’s be more sensitive about our loved ones and people around us and help save someone from committing suicide today.

Share your thoughts, opinions and comments on this below.