ANOTHER PENALTY SHOOTOUT WIN IN ISTANBUL!!

Goals from Oliver Giroud for Chelsea and Saido Mane for Liverpool in either half ensured the game got into extra time. Mane scored for Liverpool again but a Jorginho equalizer from the spot meant the game was to be settled by the lottery of penalties. 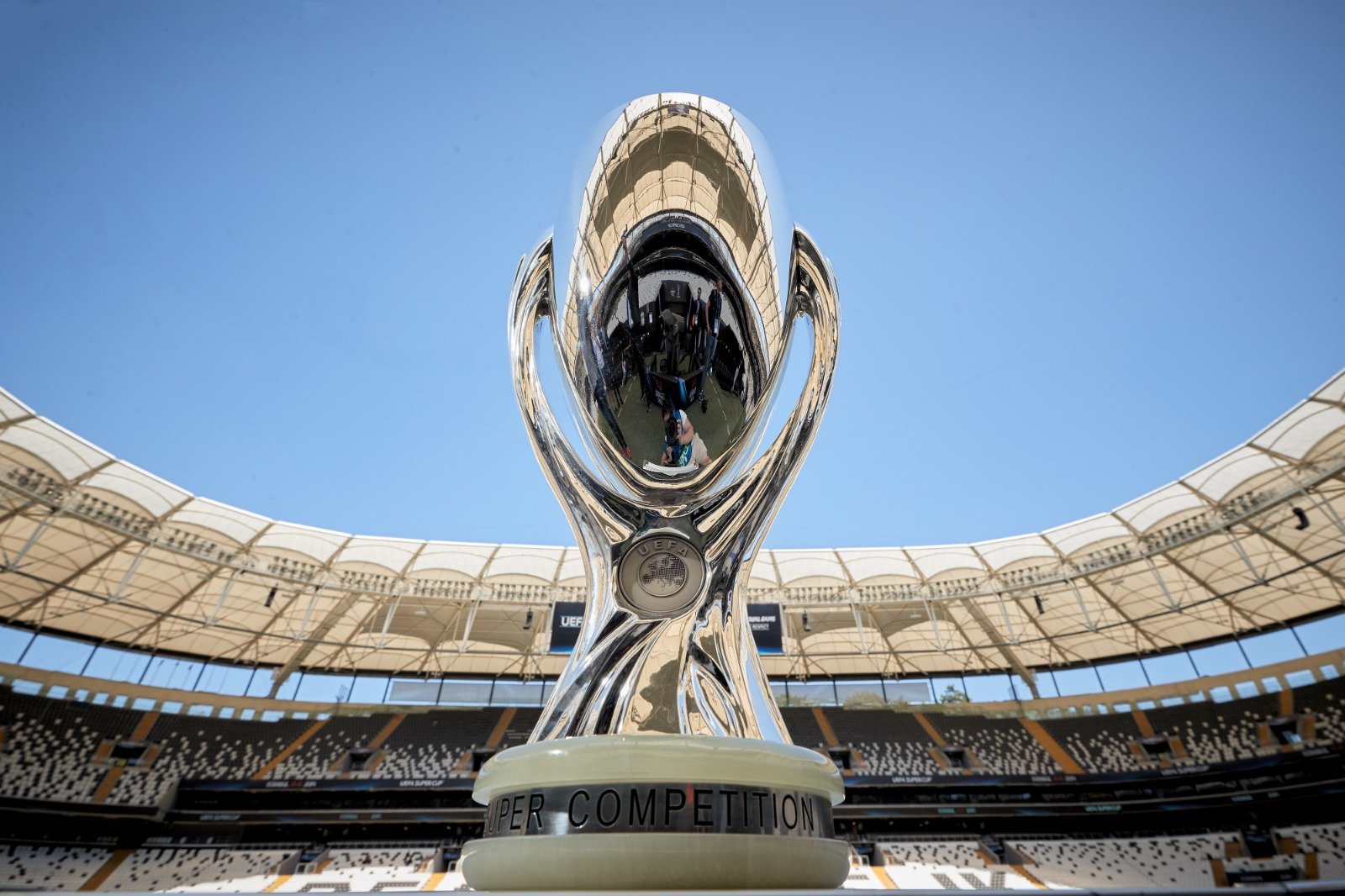 Liverpool would go on to win the penalty shootouts 5-4 as Tammy Abraham missed the only spot kick of ten played. 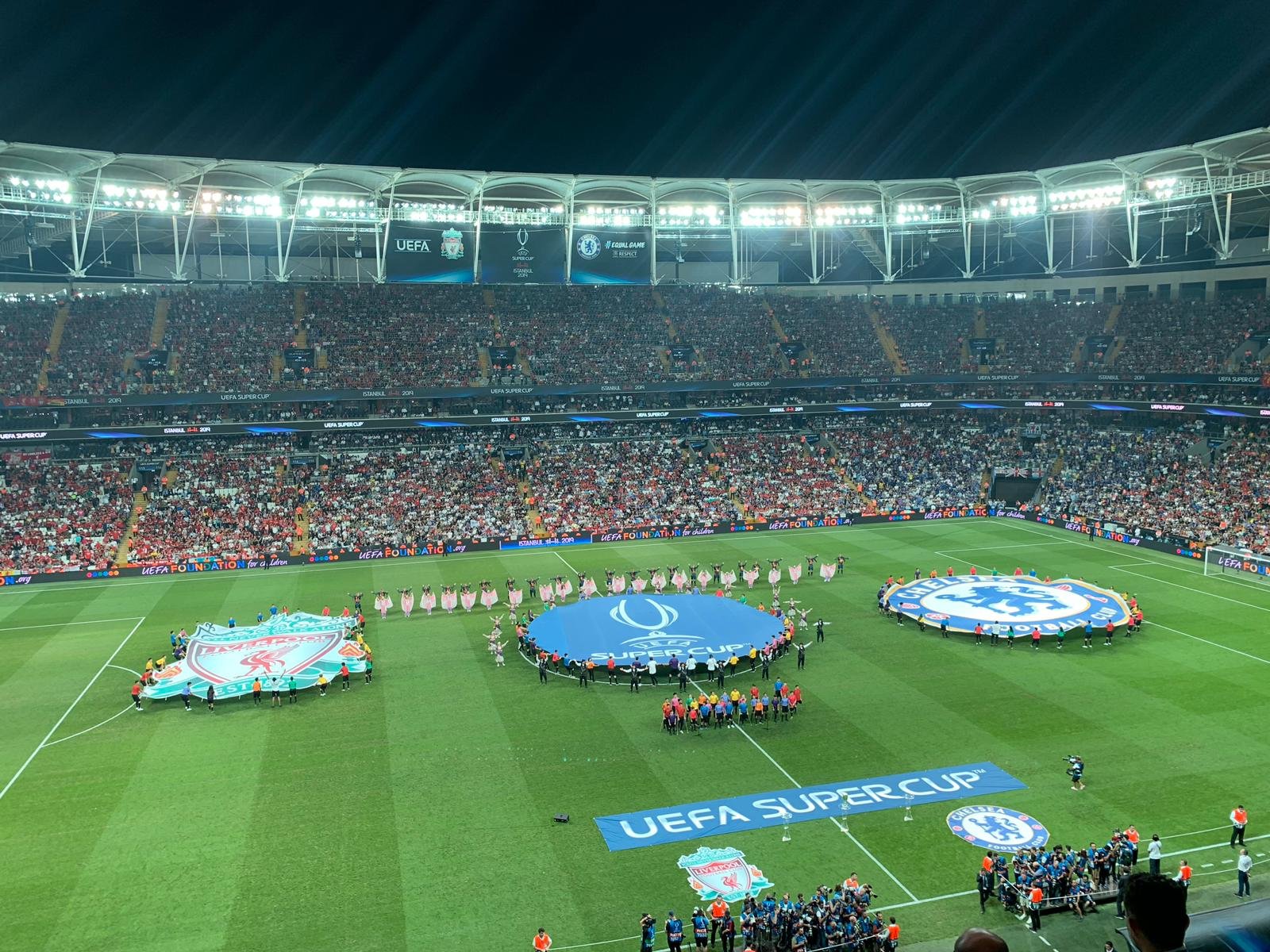 Our team to face @ChelseaFC tonight 👊

Meanwhile former West Ham goalkeeper Adrian got named in for the injured Alisson, while Naby Keita was out with a thigh strain. Chelsea boss Frank Lampard however, named a more experienced and conservative look to them than they did against Manchester United.

In came N’Golo Kante as part of a midfield three, Christian Pulisic made his first start and Olivier Giroud was named up front while youthful Mason Mount, Ross Barkley and Tammy Abraham got dropped by the Chelsea manager. 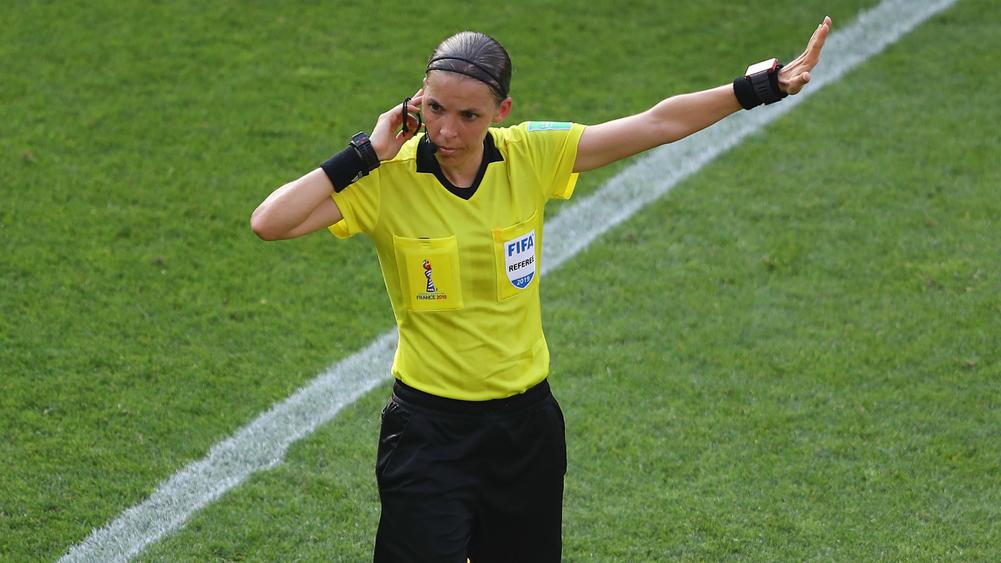 Centre referee Stephanie Frappert, made history by becoming the first woman to officiate a major men’s European match. She also refereed the women’s World Cup final in July and has taken charge of Ligue 1 matches since April.

Liverpool took ‘the bull by the horn’ as Henderson charged down the right at Chelsea and sent in a cross to Mane, the forward met it with an acrobatic overhead kick but had it hit Christensen on the arms and deflect wide for a corner which got dealt with by the Europa League winners.

Liverpool came close again as a poor clearance from Kepa set the Reds on the attack, but Salah’s shot got blocked on the edge of the area.

Chelsea had their own chance to take the lead as Pedro hit the bar! The Spaniard played a great one-two with Oliver Giroud, then slipped into the left of the Liverpool area and decided to have a pop from a tight angle. His shot beat Adrian in goal but bounced off the bar and away to safety.

Chelsea resilience finally paid off as Oliver Giroud gave the Blues the lead. N’Golo Kante took charge in the centre again, driving past Fabinho and holding off Mane before finding Christian Pulisic. This time the American had the composure to lift his head, pick a pass and slip the ball through to Giroud, who used his left foot to slip a low finish under Adrian for the opener. 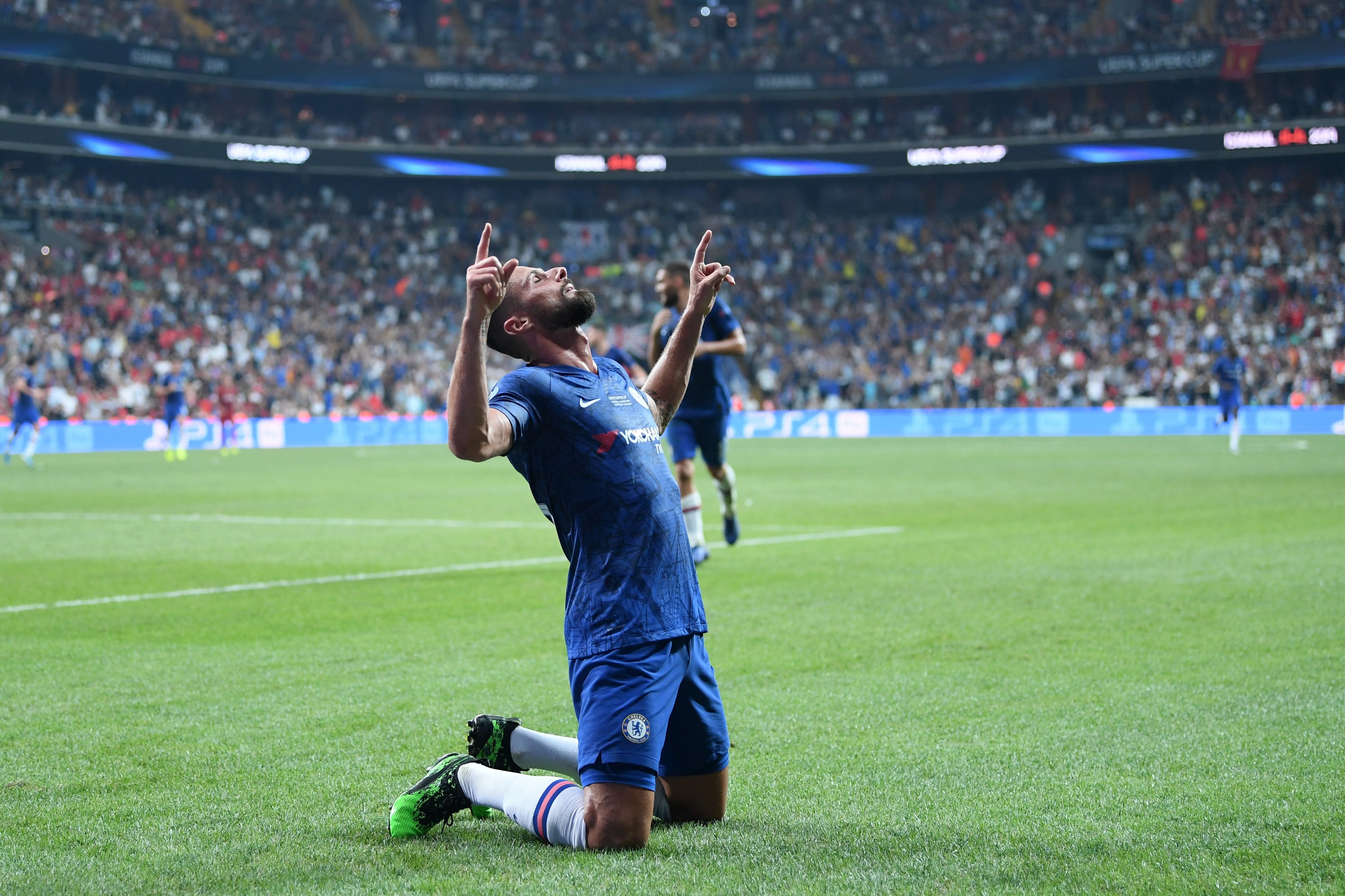 Chelsea had the chance to go 2-goals up but Pulisic’s ball in the Liverpool net was was cut off after being flagged offside by the VAR with Frank Lampard’s men leading at half-time thanks to Giroud’s goal over an unimpressive Liverpool. 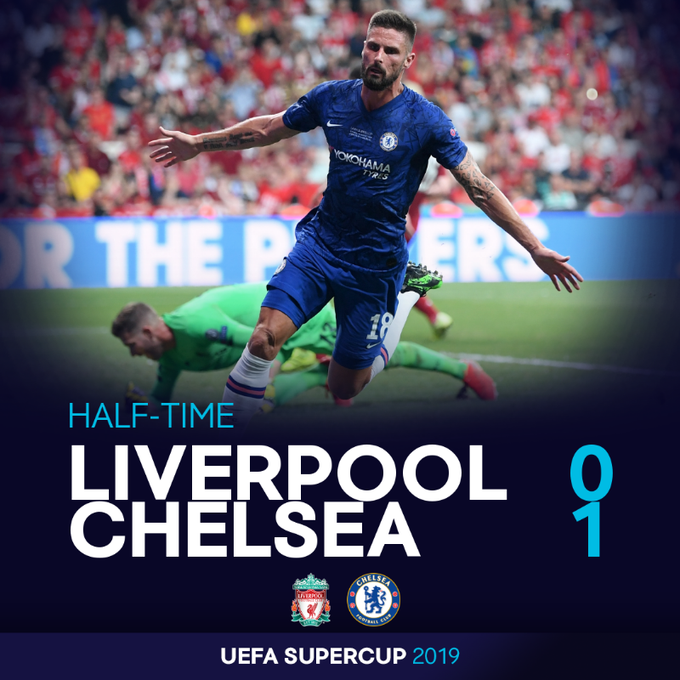 Second half didn’t take long as Liverpool clawed their way back into the game almost immediately.

Roberto Firmino who replaced Oxlade-Chamberlain at half-time, got played onside by Azpilicueta, knocked the ball round the Chelsea goalkeeper, and then had Mane finish it off, bundling the ball over the line from a few yards, making him 1st player from Africa to score in a UEFA Super Cup match. 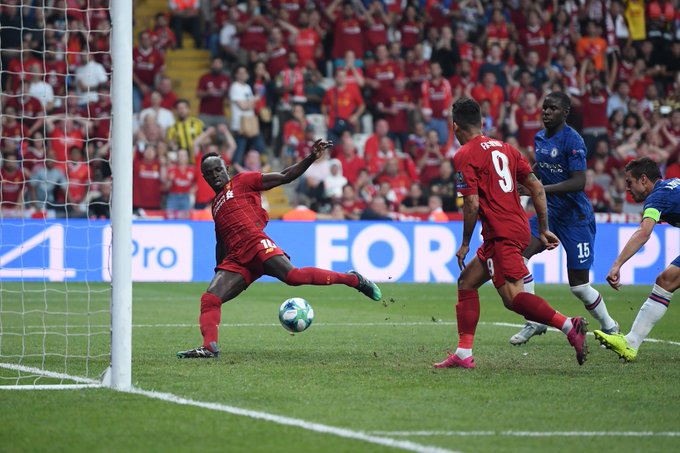 With 20 minutes left to full-time, both teams looked have run out of steam as Lampard in search of more firepower, brought on Tammy Abraham and Mason Mount for Olivier Giroud and Christian Pulisic. 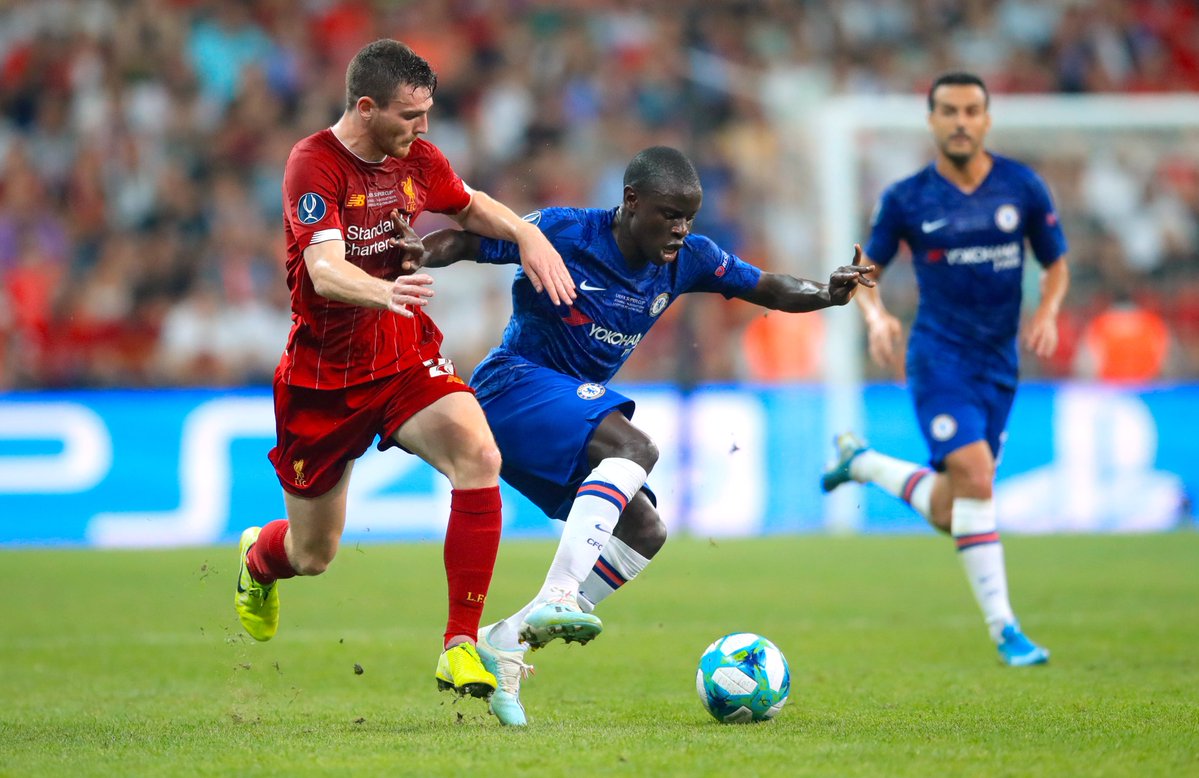 Things however , almost got worst for the Blues as a Liverpool corner from the right got sent in low by Henderson and reached Matip. The defender teed up Salah, who aims for the bottom left corner smashing a low shot through the crowd.

It took a deflection but Kepa sprung down to quickly push it out. The rebound came off to Van Dijk who looks certain to score but had Kepa somehow jumps up and pushes it on to the bar and then out of danger for Liverpool corner kick

Full-time wasn’t enough to separate both sides as ended 1-1 at regulation time to take the game into extra-time.

Liverpool then took the lead just five minutes into extra time as Saido Mane received a pass from Roberto Firmino who broke clear down the left. The Senegalese immediately side-footed a brilliant rising finish past Kepa for his second of the night.

It took only four minutes for Chelsea to level up as Liverpool goalie Adrian, sent Tammy Abraham sprawling with a rash and needless challenge. Jorginho made a casual run-up and then leveled the Blue with Reds as Adrian was left in no man’s land. 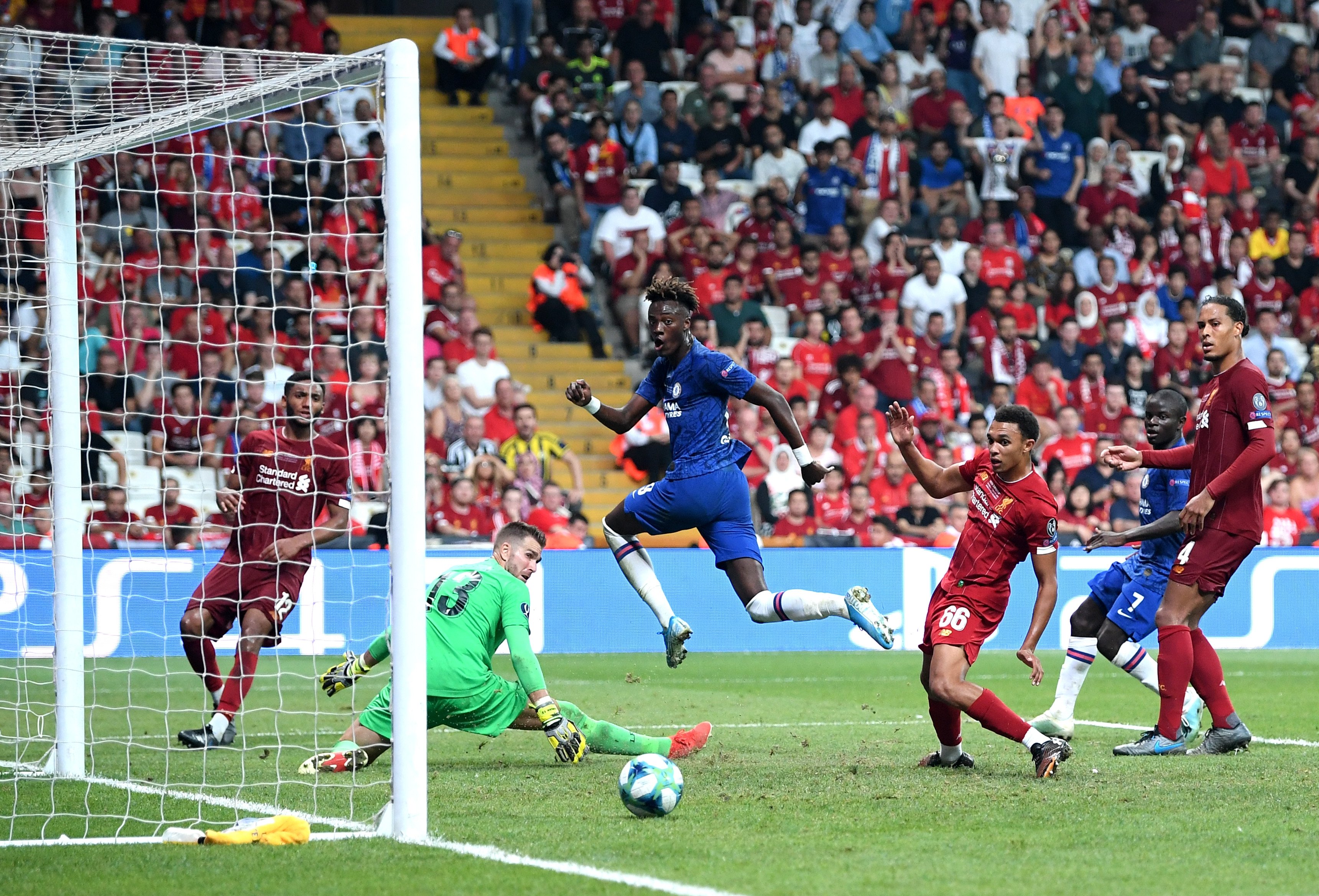 Chelsea had one final string of chances before penalties as Mount stung Adrian’s palms from the edge of the area after being teed up by Abraham. Pedro then slid a shot inches wide from 20 yards but that was the last of action as the game headed to penalties.

Liverpool would go on to win the penalty shootouts 5-4 as Tammy Abraham missed the only spot kick of ten played.