The latest nominee list of FIFA Best Men’s Player Award did not go down well with football fans and some of them took to social media to vent their frustrations because some of their favourites players missed out. 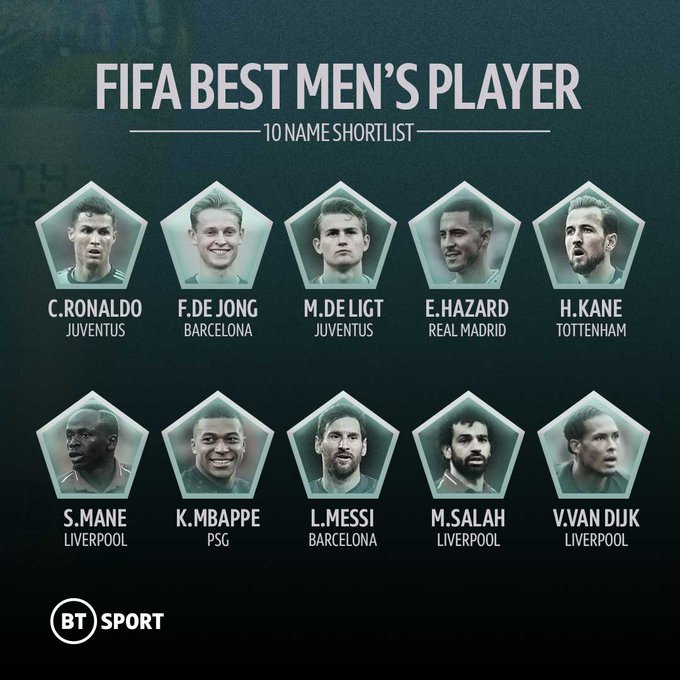 Juventus forward, Cristiano Ronaldo and Barcelona superstar, Lionel Messi have consistently been nominated since the inception of the award and nobody was shocked to see them included in the run-in for the top gong. 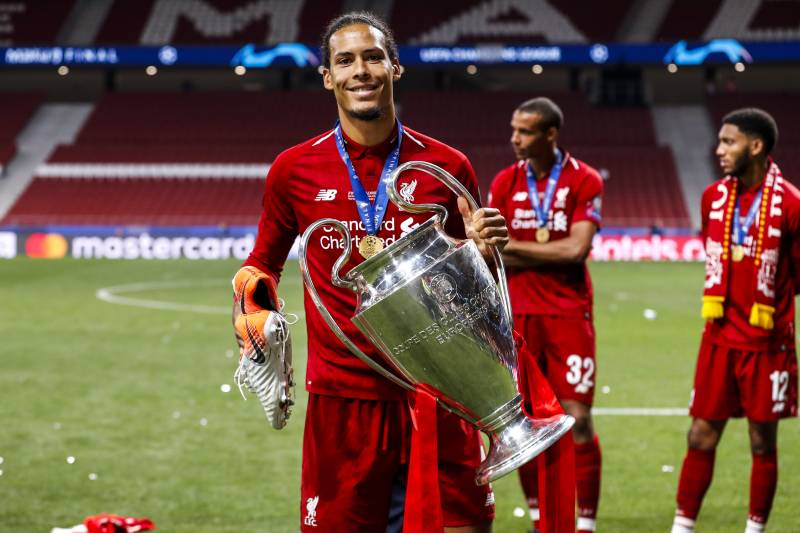 However, Liverpool defender, Virgil van Dijk is the dark horse for the coveted award ahead of the two football greats following his huge influence in the Reds successful season. The Dutch captain joined the Premier League giants in January 2018 and his impact in defence has pushed Jurgen Klopp’s men to two consecutive Champions League finals. 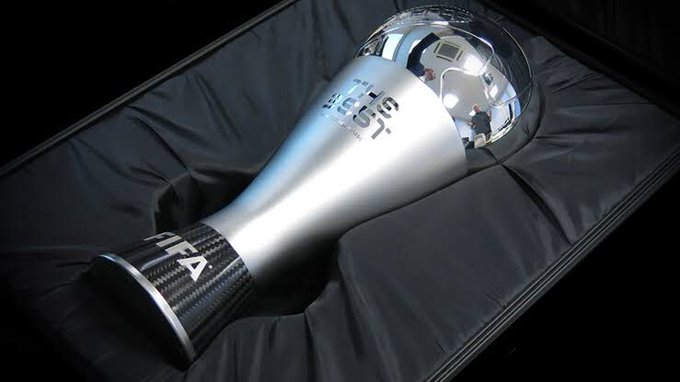 Van Dijk won the UEFA Champions League and was named PFA Players’ Player and Premier League Player of the Year as Liverpool challenged an incredible Manchester City side in one of the most captivating title races in recent history. The former Celtic man also helped Netherlands reach the UEFA Nations League final where they lost a Cristiano Ronaldo-led Portugal.

Messi, on the other hand, won the Spanish La Liga and helped his Barcelona side to the UEFA Champions League semi-final where they lost in improbable fashion to eventual winners Liverpool. 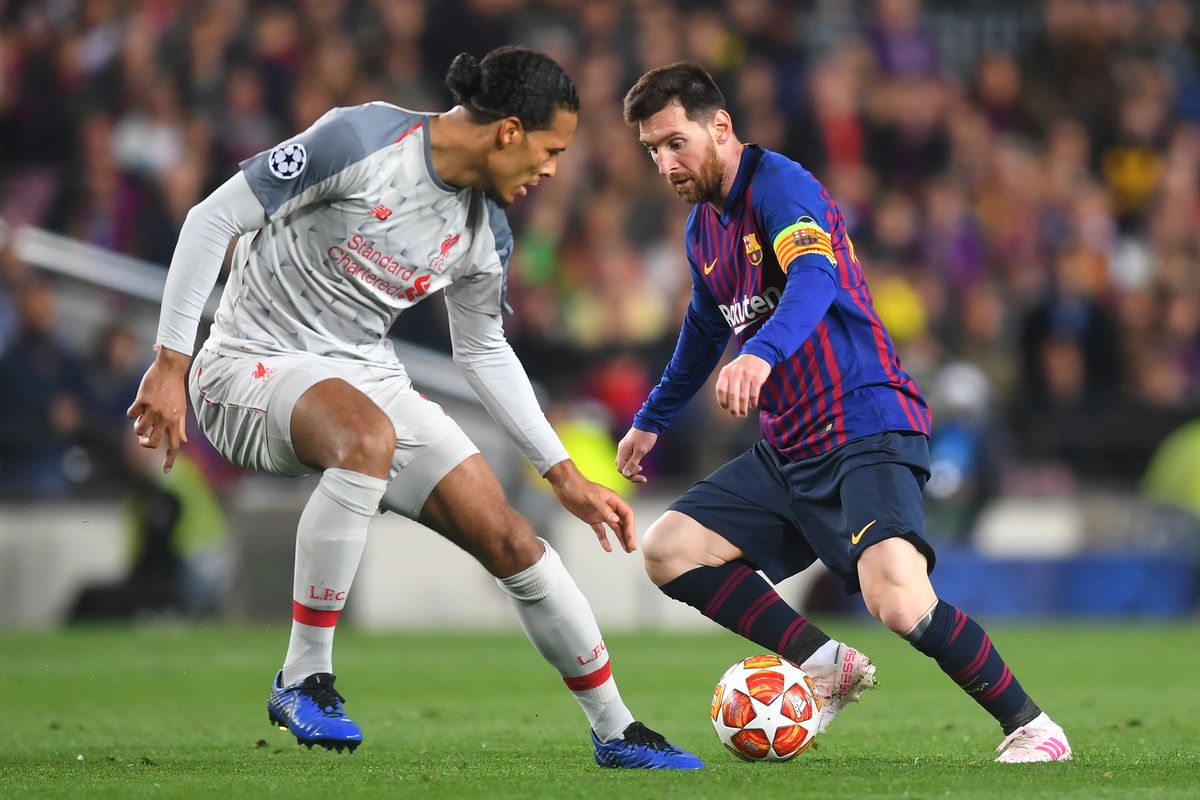 Also, the Catalan giants lost the Copa Del Rey final but Messi claimed the European Golden Shoe as the continent’s top goalscorer and La Liga’s top assist-maker. The Argentine talisman also helped Argentina win bronze at 2019 Copa America. But Messi’s tournament was marred by the negative comments he directed at CONMEBOL and he was sent off before the end of the tournament. 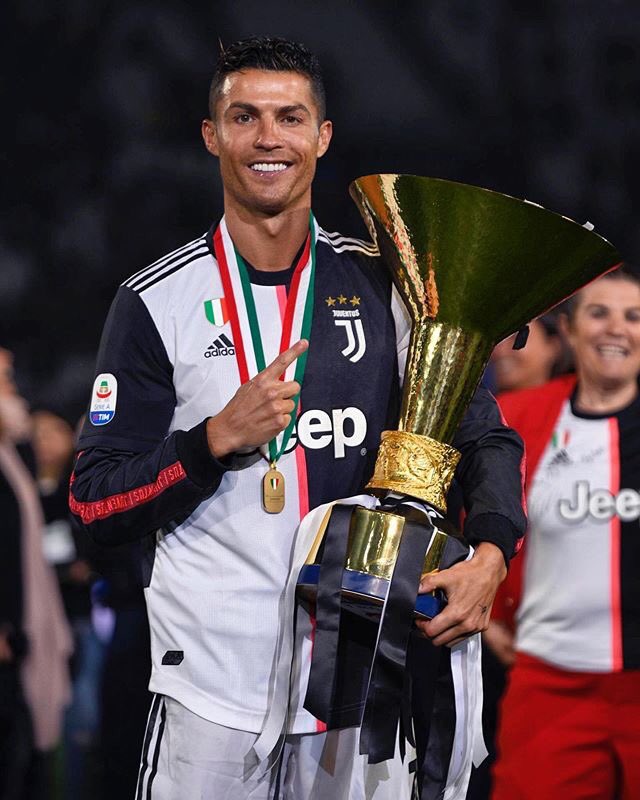 While Messi and Van Dijk have had impressive seasons, Juve’s goal machine Ronaldo is the most deserving player on the ten-man list because of his incredible performances for club and country at 34 years of age. 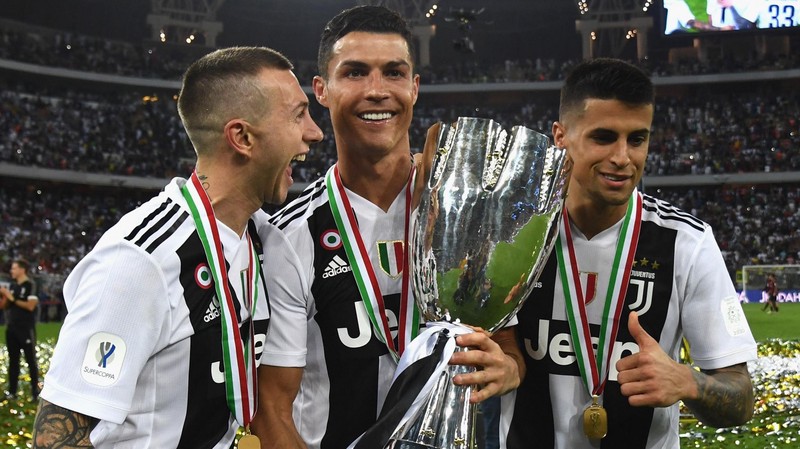 The Portuguese star helped Juventus win the Serie A as top goalscorer for the club in all competitions and was named Serie A’s Most Valuable Player in his first season at the club. 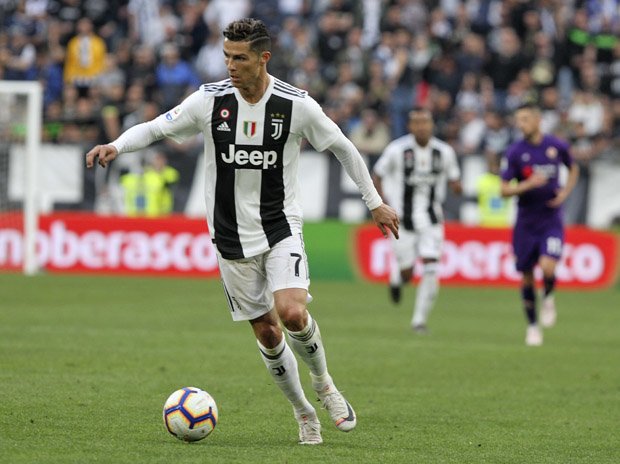 The former Real Madrid man scored 31 goals and created 13 assists as the Bianconeri won their eighth Scudetto and he reminded all fans that he still had the magic in his boots in the Champions League. Juventus scored only five goals in the knockout stages of Europe’s Premier competition and all of them were scored by Ronaldo.

The Serie A side were drawn with Atletico Madrid in the round of 16 of the Champions League and lost the first leg 2-0 at the Wanda Metropolitano in Madrid. 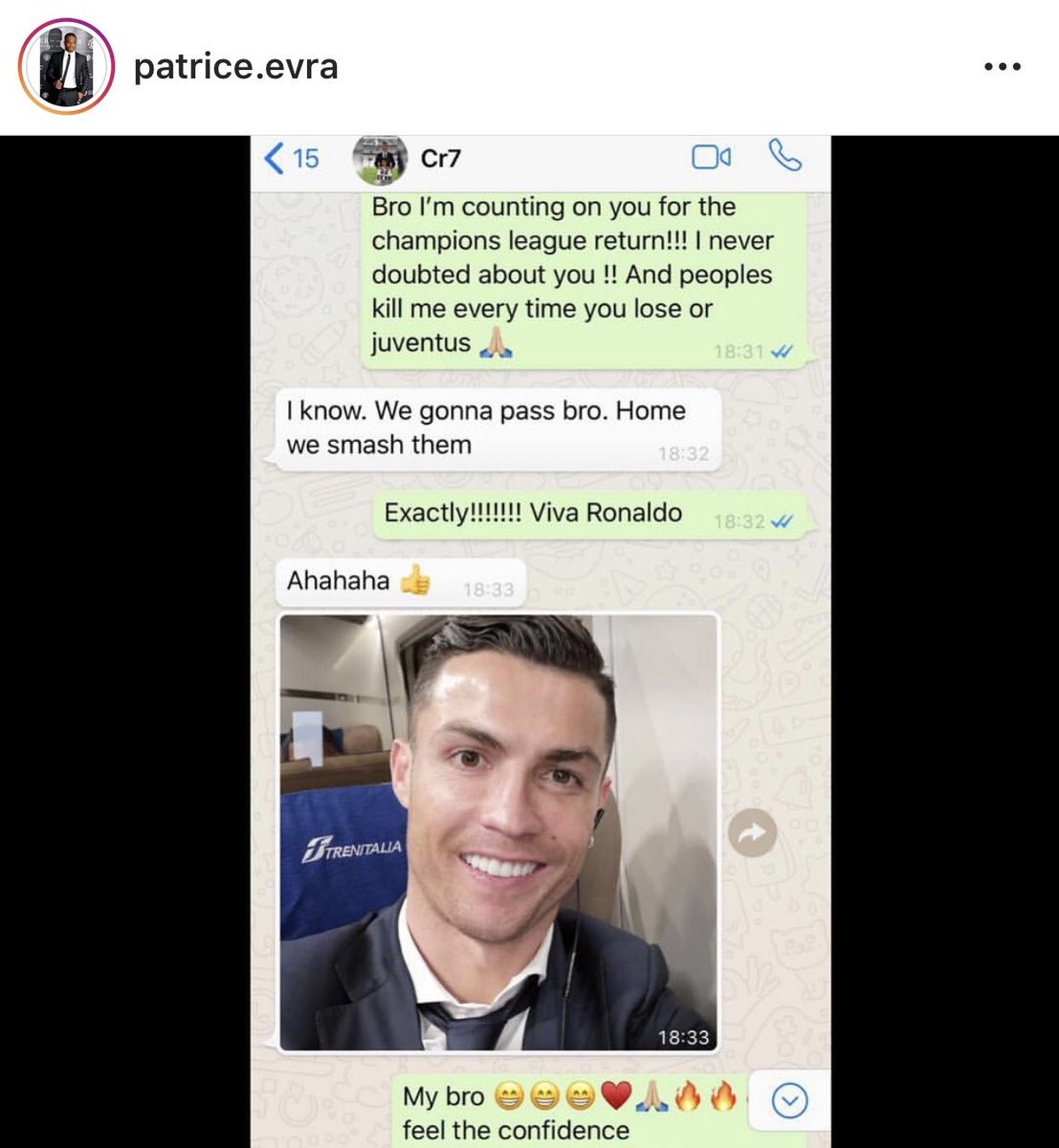 Ahead of the second led in Turin, Ronaldo invited members of his extended family to the Allianz Arena and asked to come and witness a “great night.”

The 34-year-old inspired a remarkable turnaround, scoring the first goal with a header from close range before tying the game on aggregate with another superb finish that Jan Oblak could not keep out of his own goal. 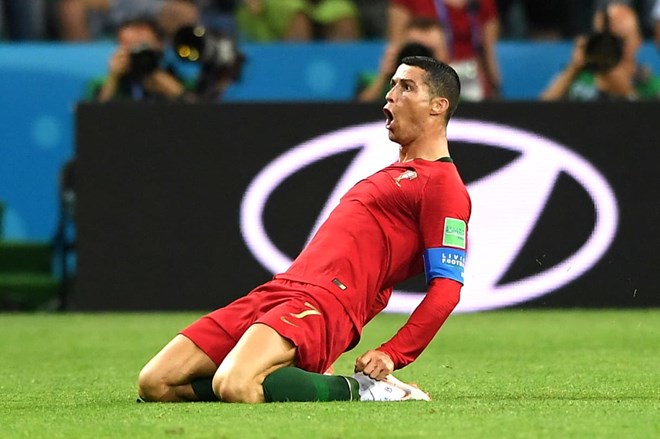 All of Europe and the rest of the world had no doubt that Ronaldo would win the game for Juventus when he stepped up to convert a penalty in the dying moments of the game to complete a great night in Europe.

Ronaldo’s dominance on the pitch did not end with his exploits with Juventus and he shut critics up with his performances during national team duty in the summer.

While Messi and Van Dijk came short of glory in their national team colours. Ronaldo scored an inspiring hat trick in the semi-finals of the inaugural UEFA Nations League and led his team to victory in the final.

What an unforgettable season! New experiences, gigantic club, exciting city, broken records and three more titles! I have to thank all of Juventus fans for the wonderfull way I was welcomed in Italy! You’re a very important part of our victories! Thanks to all my fans around the world and particularly to the portuguese people that helped us reach another historical win for Portugal! You’ll allways have a special place in my heart! Personaly, I’ll never forget the great moments and new record-breaking achievments I’ve had so far in 2019: – Italian Supercup winning goal; – Serie A win, Best Player and 21 goals; – Nations League win and hat-trick; – First Player to reach 100 wins and 125 goals in Champions League; – First Player to win 10 UEFA titles; – First Player to score in all National Teams final stages: FIFA World Cup, UEFA European Cup, FIFA Confederations Cup and UEFA Nations League; – First Player to score in 10 consecutive National Teams final stages from 2004 to 2019; See you soon! Together we’ll keep fighting for new and amazing conquests! I’m counting on you! ????? ????????

The football superstar has proven over time that he is the man to call on in the moment of need and his age has not done anything but inspire him to become even better. He listed his records for the year in review on social media at the end of the 2018/19 season, all of which are more impressive than anyone else on the list. 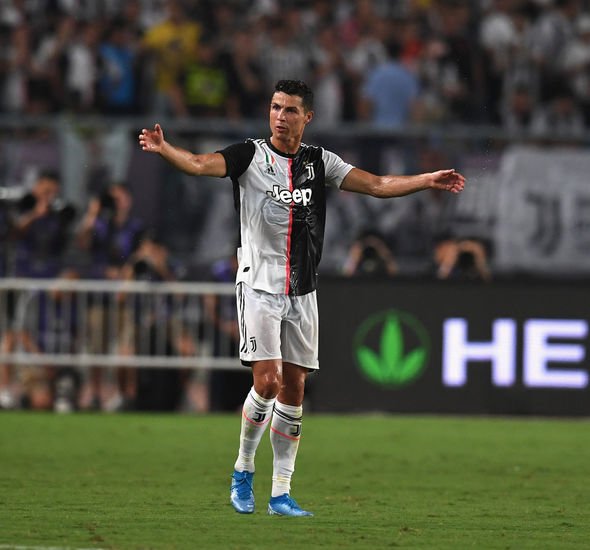 Ronaldo thanked the fans of his club and the national team for their unconditional support, using the opportunity to remind them that he hoped to do even better in the coming season. He has already proved that he achieves anything that he has set his mind on. 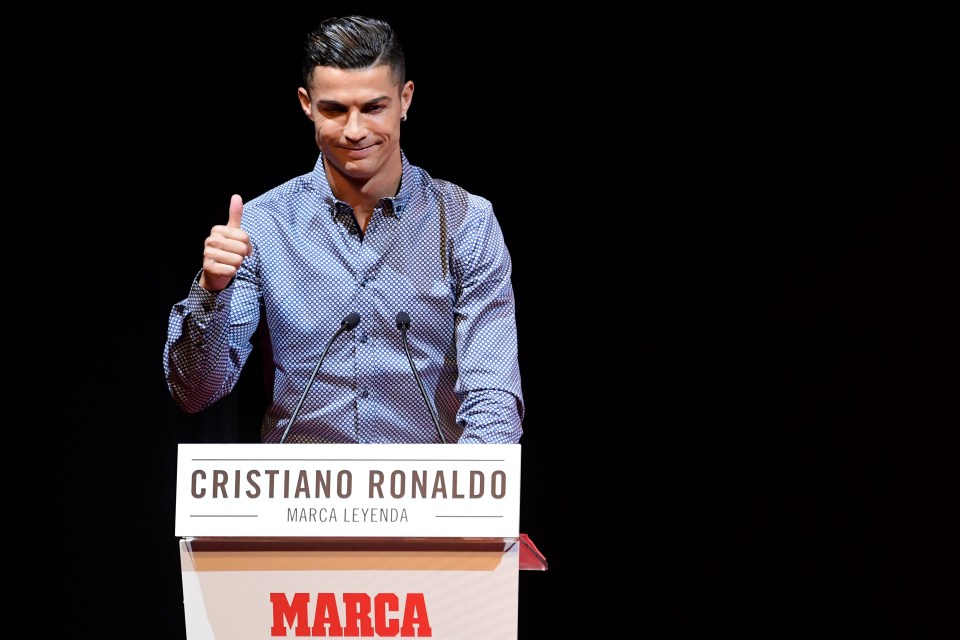 He was awarded the Marca Legendary award for his achievements with Real Madrid just before the nominees’ list for FIFA The Best was released and he is the best candidate to win the award yet again.