Eden Hazard joined up with his Real Madrid teammates for the first time as the European giants got back to work in preparation for the upcoming season. 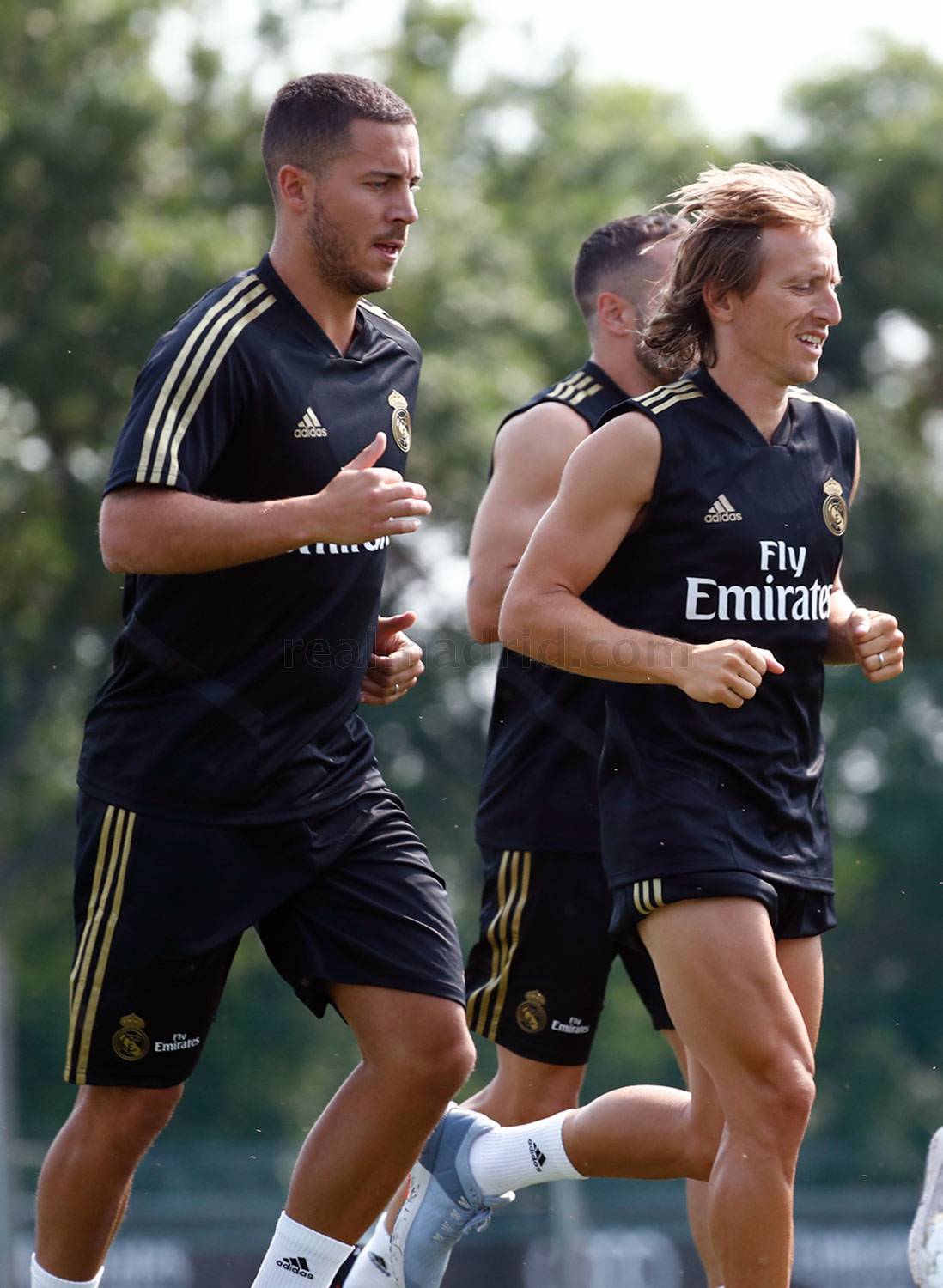 The former Chelsea man was full of smiles and obvious happiness as he prepared to join his new teammates for the training session. He was asked how he felt to partake in the session and he said: “can’t wait.” He also revealed that he had been up since 5 am because of jet lag.

Los Blancos had a season to forget last time out after losing Cristiano Ronaldo to Juventus and the resignation of Zinedine Zidane prior to the beginning of the 2018/19 season.

Julen Lopetegui and Santiago Solari were in charge of the Madrid giants but both of them were fired before Zinedine Zidane agreed to return to the dugout and rebuild the squad. 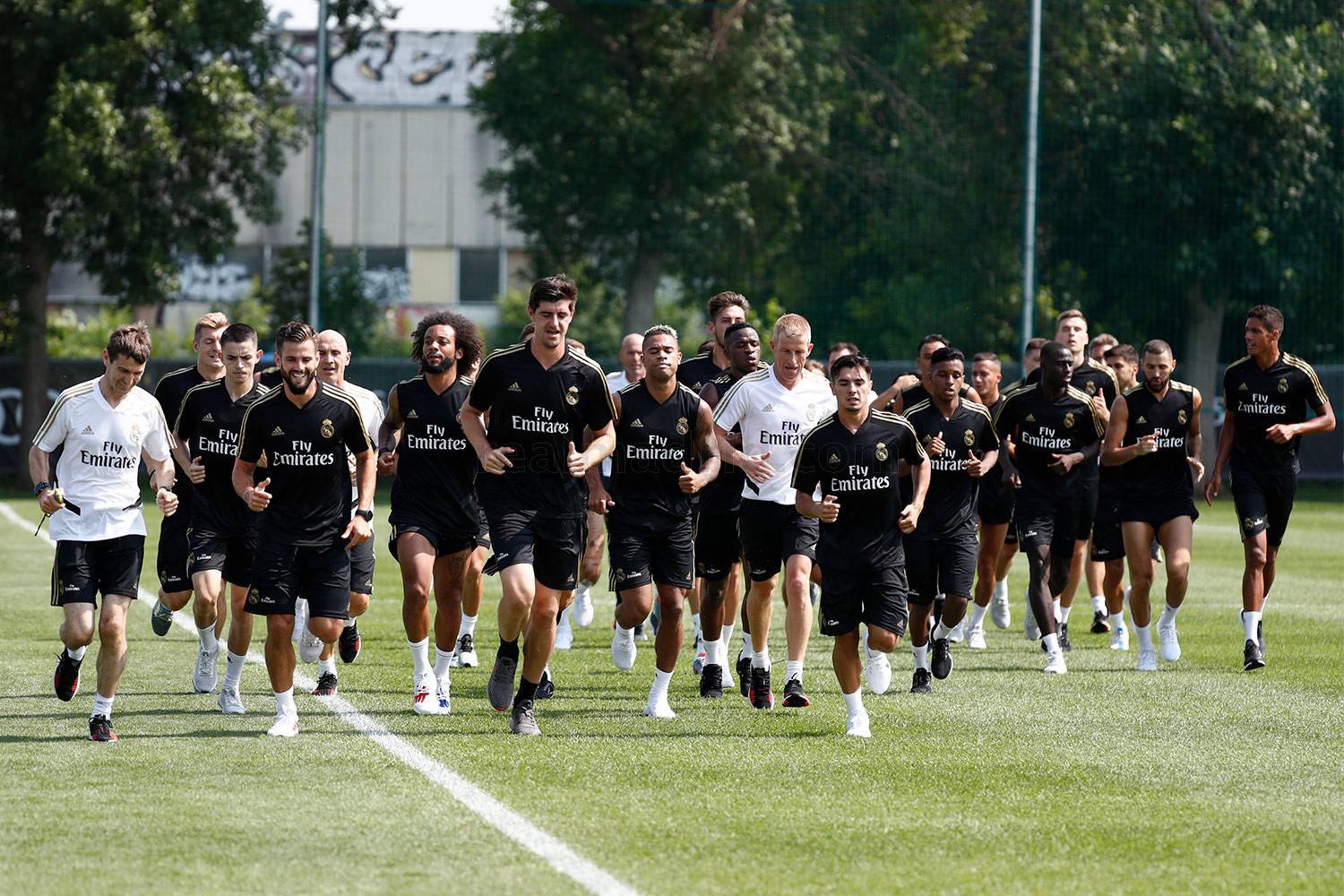 The Frenchman has already overseen the acquisition of Eden Hazard, Luka Jovic, Eder Militao, and Ferland Mendy to the Santiago Bernabeu with more signings expected to join the club before the beginning of the La Liga season. 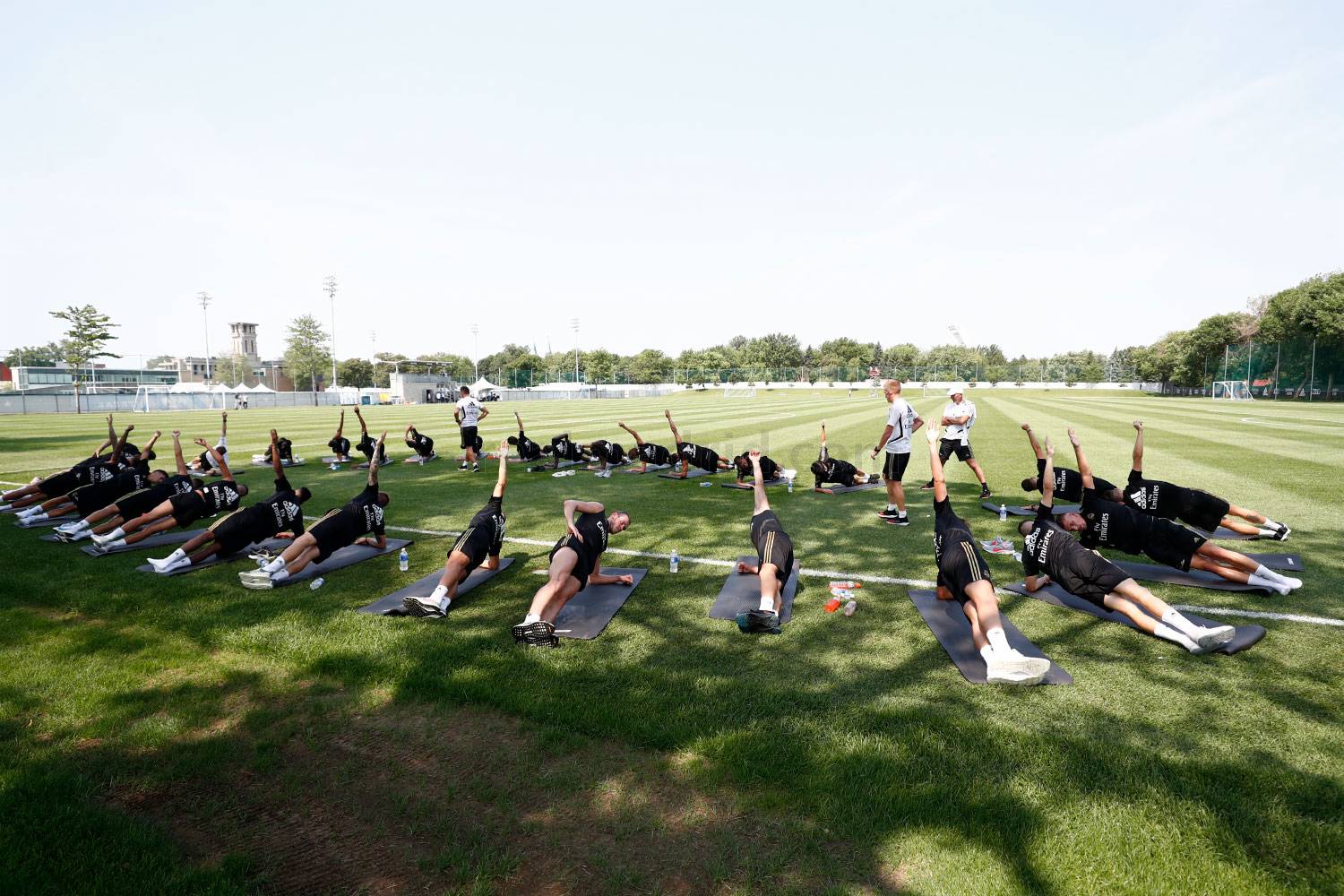 Zidane’s newly assembled team have completed their first day of pre-season training in Montreal. The Blancos got to know the Montreal Impact facilities in a double session which combined physical and ball-work exercises.

Hazard, Mendy, Jovic, Rodrygo and Kubo were all present to carry out their first day’s training as Madridistas. The evening session saw ball-work take centre stage. The players completed a range of circulation, control and passing exercises. 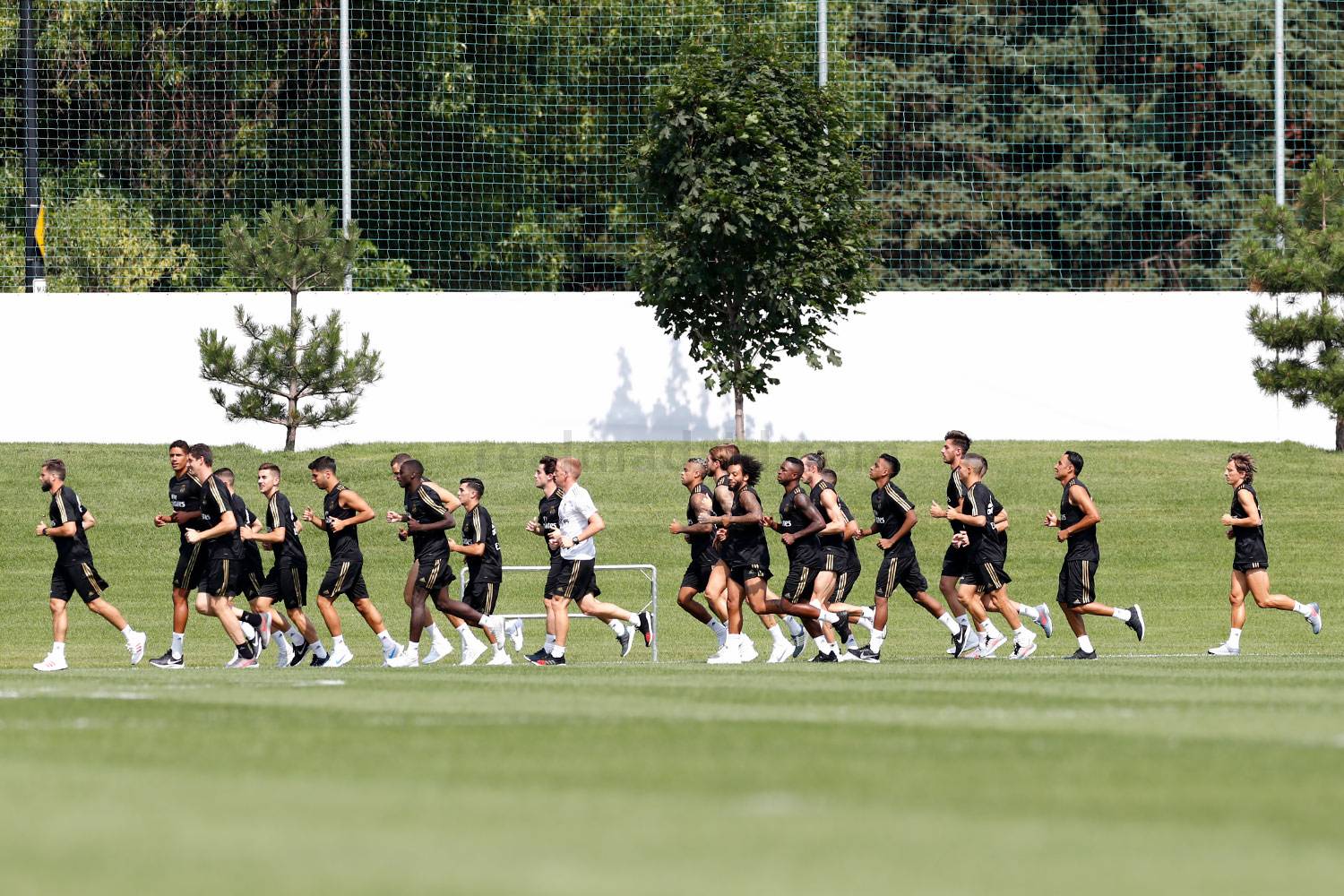 Following possession and pressing drills, they played a series of games on reduced-size pitches. During the morning, the Whites took on a demanding running circuit out on the Montreal Impact pitches. The session finished off with stretches and series of abs. 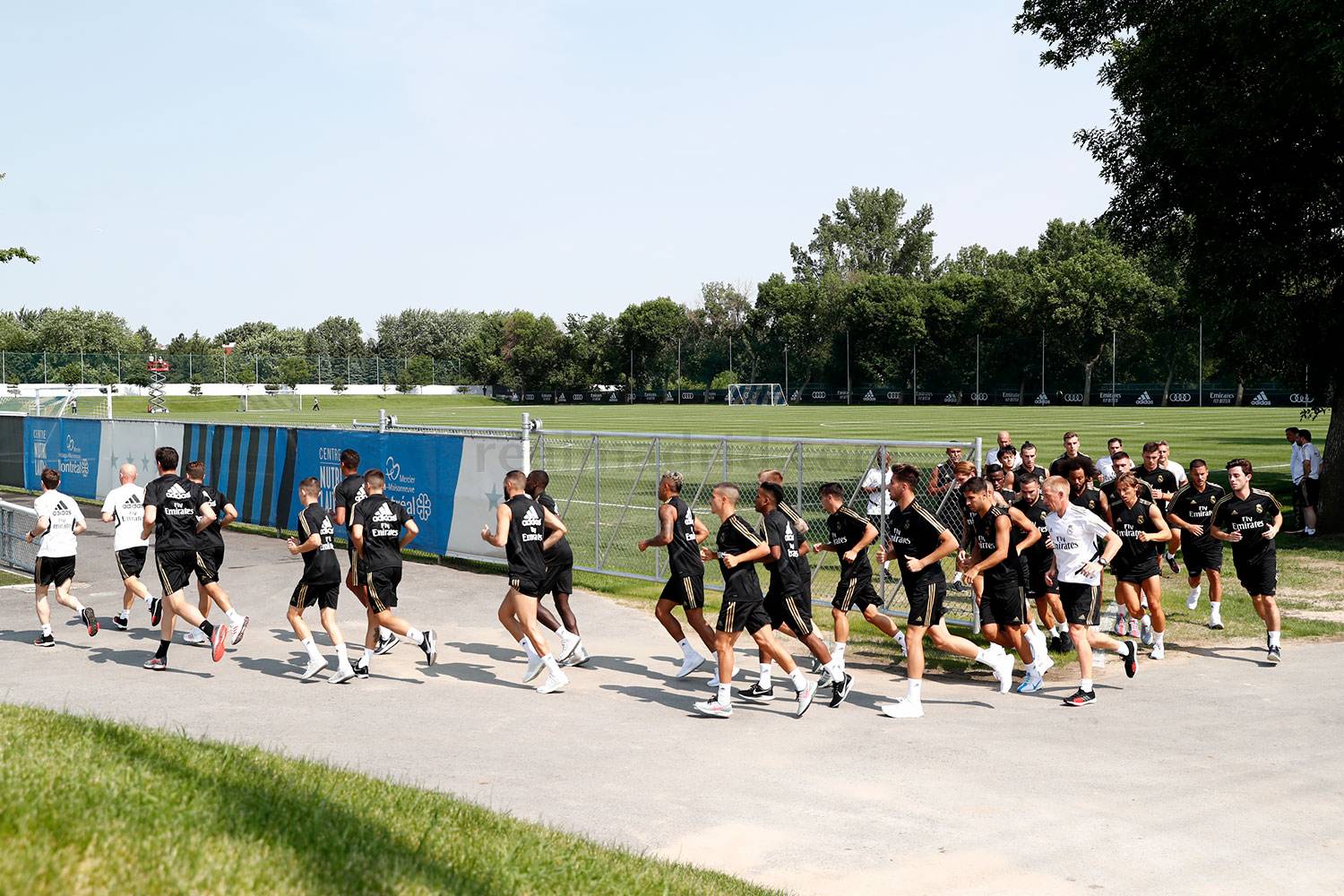 Real Madrid are expected to play Celta Vigo in their opening fixture of the Spanish La Liga in August. Los Blancos have a proper schedule of pre-season friendlies to help them prepare for the upcoming session.

July 9-July 18: Base camp at Centre Nutrilait (Montreal). Zidane’s men will spend over a week at the Montreal Impact training centre, the lavish installations of the MLS side that cost over 16 million dollars and boast two natural grass pitches and one AstroTurf surface. 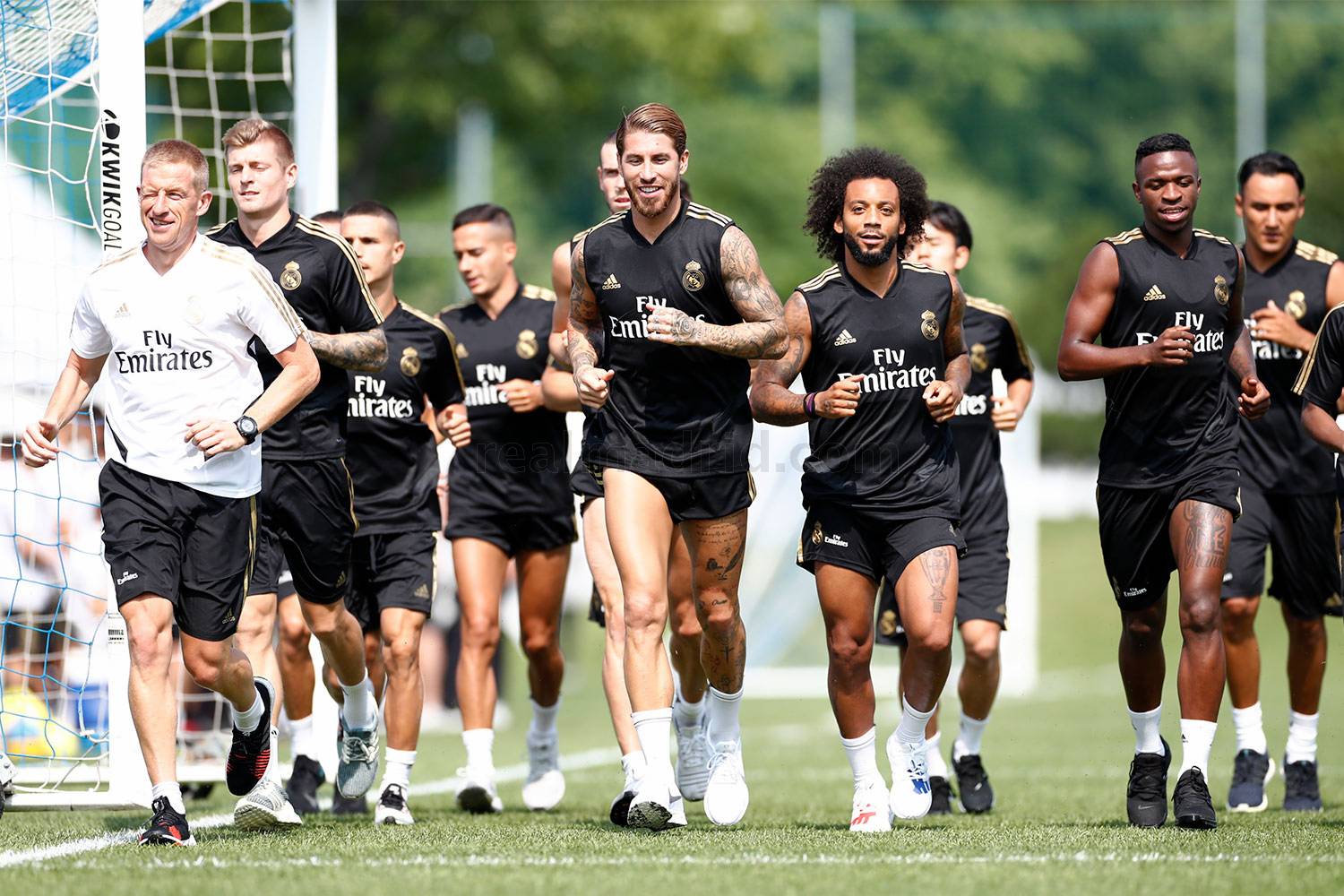 July 24 vs. Arsenal (ICC): The Europa League finalists and Premier League outfit are next up for Zidane’s side with the ICC game being staged at the FedEx Field in Maryland.

?↕️ Some physical work to finish off the morning session. #RMTour pic.twitter.com/cJqiYRDaeO

July 27 vs. Atletico Madrid ICC: A Madrid derby in New Jersey is the final encounter for “Los Blancos” stateside at the MetLife Stadium (home to NFL football sides NY Jets and Giants) which brings the curtain down on the US tour.

July 30/31 vs Tottenham: Audi Cup. Champions League finalists Spurs will be Madrid’s opponents in the four-team 2019 Audi Cup with a final or 3rd/4th place game the following day against either Bayern or Fenerbahce.

“Hey, madridistas! We’re in Montreal for our first training session of the pre-season and we’re going to give it everything. See you later!”#RMTour | #HalaMadrid pic.twitter.com/Bbbu8a8jS2

August 5/11: Zidane’s side will play two pre-season games this week outside Spain with opponents yet to be confirmed.

August 17/18: vs Celta Vigo: (LaLiga): A trip to Galicia is the starting point for Real Madrid’s LaLiga campaign with a visit to the always complicated Balaidos