The Flying Eagles of Nigeria were eliminated from the FIFA U-20 World Cup in Poland by Senegal after a 2-1 defeat.

The Nigerians were poor in the first half but their spirited performance in the second half was not enough to turn the tie in their favour. While there will be many reactions to the exit of the youngsters, here are five things learnt from the game.

Flying Eagles’ Goalkeeper Oremade has a lot to improve on

The Flying Eagles were unimpressive in all departments but the goalkeeper Oremade was probably the worst of the bunch. He was shaky with the ball at his feet and was miserable with aerial balls. Although there was not much he could have done about Sagna’s opening goal for Senegal in the first half, he should have dealt with the ball across that led to the second goal.

All through the competition, it had become fairly obvious that the goalkeeper was troubled with aerial balls and crosses from the wings. Two of the three goals he conceded ahead of the game against Senegal were converted from crosses. It would be unfair to vent all the frustration of the Flying Eagles’ exit on the goalkeeper as he is still young and would only get better. The Flying Eagles head coach Paul Aigbogun spoke about his side’s preparation ahead of the game against Senegal and he implied that Nigeria would put up an improved performance against familiar opponents. However, he seemed to have gotten his tactics and team selection wrong as the Flying Eagles failed to put up an inspiring performance.

Tom-Dele Bashiru started the game on the bench despite being one of the best players in the squad. Okon, who impressed against Ukraine in the middle of the park was deployed on the wings where he was not as effective. Although Nigeria came out with renewed vigor in the second and got an early goal, the Nigerian fans would wonder why they left the performance for later.

Senegal star Sagna is one to watch out for

Senegalese winger, Amadou Sagna has been one of the best players of the tournament. He scored the earliest goal in the history of the competition by finding the net merely 9 seconds into the game against Tahiti. His pace was too much to handle for the Nigerian defenders and he got in behind the defence on several occasions.

One was just promoted into top flight football, and the other is currently playing in the Senegalese third tier.

It came as no surprise when the Senegal number 7 got himself in a good position and scored the opening goal for the Young Lions of Teranga. Although he is not signed to a top European club, he will be a good addition to any top side that will improve him as a youngster. He has shown the talent, pace, and skill to become a top player in the future.

Captain Utin should be starting for Super Eagles soon

Flying Eagles full-back and captain Udoh Utin is undoubtedly the best player in the side. It is no surprise that he was signed on a long-term deal by Israeli club, Maccabi Haifa just before the competition. He is assured and confident on the ball, bringing calm to the Nigerian defence. He is solid defensively winning crucial tackles and making important interceptions. 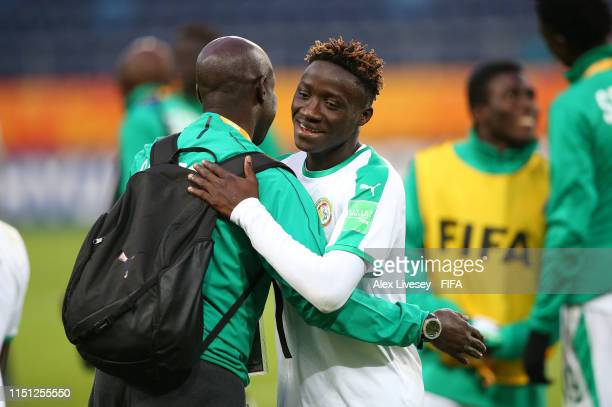 VAR is good, but it has raised more questions

The use of Video Assistant Referee caused a lot of discussion before it was finally adopted into the modern game of football. While it has improved the quality of the game of football since the 2018 FIFA World Cup in Russia, it has also left more room for arguments and controversy.

Ahead of the second goal for Senegal, the referee awarded a free-kick for a foul that was committed inside the box. He was called to the VAR by his assistants and he watched the replay on the monitor. Yet, he stuck with his initial decision that was wrong. Nigeria failed to score from the free-kick and Senegal scored from the resulting counter attack.

Senegal have been one of the most impressive sides in the tournament and they would be hoping to go all the way and win it. With Nigeria out of the competition, the Young Teranga Lions of Senegal would be hoping to get the support of all African teams as they hope to bring glory to the continent.

Do you think Senegal has what it takes to win the 2019 FIFA U-20 World Cup? Share your thoughts in the comment section.