Manchester City have won the 2019 English FA Cup after a 6-0 win over Watford at Wembley on Saturday.

The win means that Manchester United will now go straight to the group stage of the Europa League, avoiding the qualifiers. 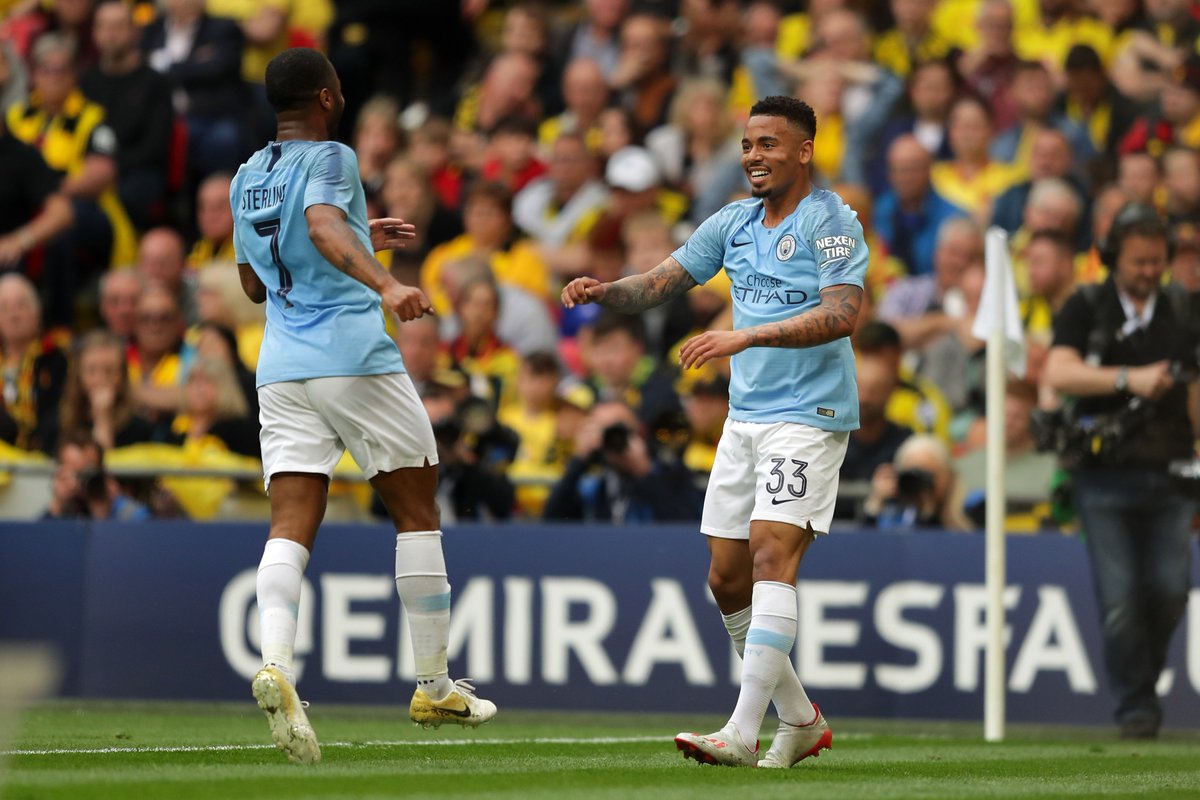 City headed into the game having won the Premier League title less than a week ago.

The first four minutes of the game was quite competitive, with City not having their usual domination of possession.

City’s first chance came via Bernardo Silva in the 7th minute. The Spaniard charged towards the Watford goal, but his pass to Gabriel Jesus was cleared by the Watford defence.

Minutes later, Watford’s Roberto Pereyra had a one on one chance to put his side ahead, but Ederson brilliantly saved City from going behind.

Watford demanded a penalty in the 21st minute after the ball struck Vincent Kompany’s hand in the box, but it was turned down by the officiating referee.

Manchester City took the lead in the 26th minute via a David Silva strike inside the penalty box. The goal was Silva’s first in 2019.

27 – David Silva has ended a run of 27 games for Manchester City without scoring in all competitions, attempting 34 shots and playing 2066 minutes since he last found the net against Southampton on December 30th. Stage. #MCIWAT #facupfinal pic.twitter.com/kkSJ7DDflJ

After the goal, Man City continued to dominate the next seven minutes and appeared likely to get a second.

In the 38th minute, City made it two nil via a brilliant Gabriel Jesus tap in from the left. Bernardo Silva provided the assist.

At this point, Guardiola’s men were well on their way to another domestic trophy. They were comfortable on the ball, passing it around without pressure.

The first half ended with City firmly in control of the final.

The second half started with Man City still dominant in terms of possession. In th 47th minute, Jesus had a chance to get his second and make the score 3-0, but his effort was put out for a corner by Heurelho Gomes.

In the 57th minute, it would have been three nil when Kevin de Bruyne sent a cross into the Watford area, but the opposition defence dealt with the ball perfectly, preventing it from getting to one of the Citizens’ front men.

De Bruyne made it three in the 61st minute after a swift counter attack following a Watford free kick.

Kevin De Bruyne has scored six goals across all competitions this season:

His own kind of domestic treble. 😉 pic.twitter.com/PSTyrAD67S

7 – Gabriel Jesus (seven) has had a direct hand in the joint-most goals in the FA Cup in 2018-19, scoring three times, while laying on a further four assists (along with Wolves' Matt Doherty). Vindication. #MCIWAT #facupfinal pic.twitter.com/ONN0VXClYw

Raheem Sterling made it 5-0 in the 81st minute to make the scoreline extremely embarrassing.

Sterling made it 6-0 in the 87th minute, sending the Manchester City fans into more frenzy.

3 – Raheem Sterling has now scored a hat-trick in three different competitions in 2018-19, doing so in the Premier League and FA Cup (v Watford), while also doing so for England (v Czech Republic) in a Euro 2020 qualifier. Exemplar. #MCIWAT #facupfinal pic.twitter.com/wzduB257EO