Watford goalkeeper Heurelho Gomes has made an interesting step to his football career as he has revealed that he will become a “pastor”, after FA Cup final against Manchester City, saying he will “answer God’s call to become a pastor.” 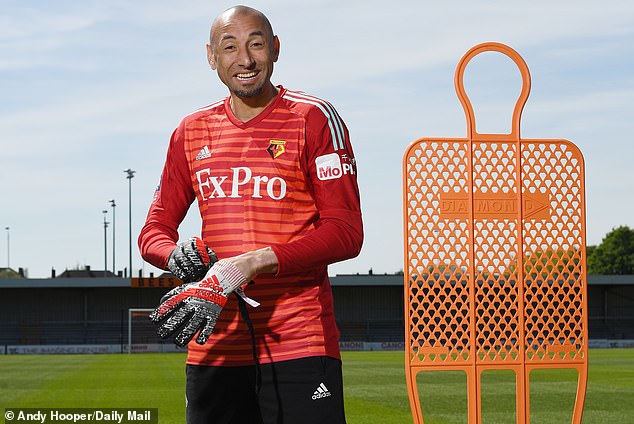 The days are ticking by and Heurelho Gomes hasn’t heard a thing. No hint, no inkling, no wink of reassurance about a decision that has been taken as a foregone conclusion up in the clouds. “There are 11 of them coming on planes. That is six brothers and four sisters. My mum, she is coming too. They are flying here from Brazil. The only one who is not is one of my brothers. He cannot make it, but the rest, they are coming. They all expect me to play. Me? I expect nothing, my friend,” he tells Sportsmail. 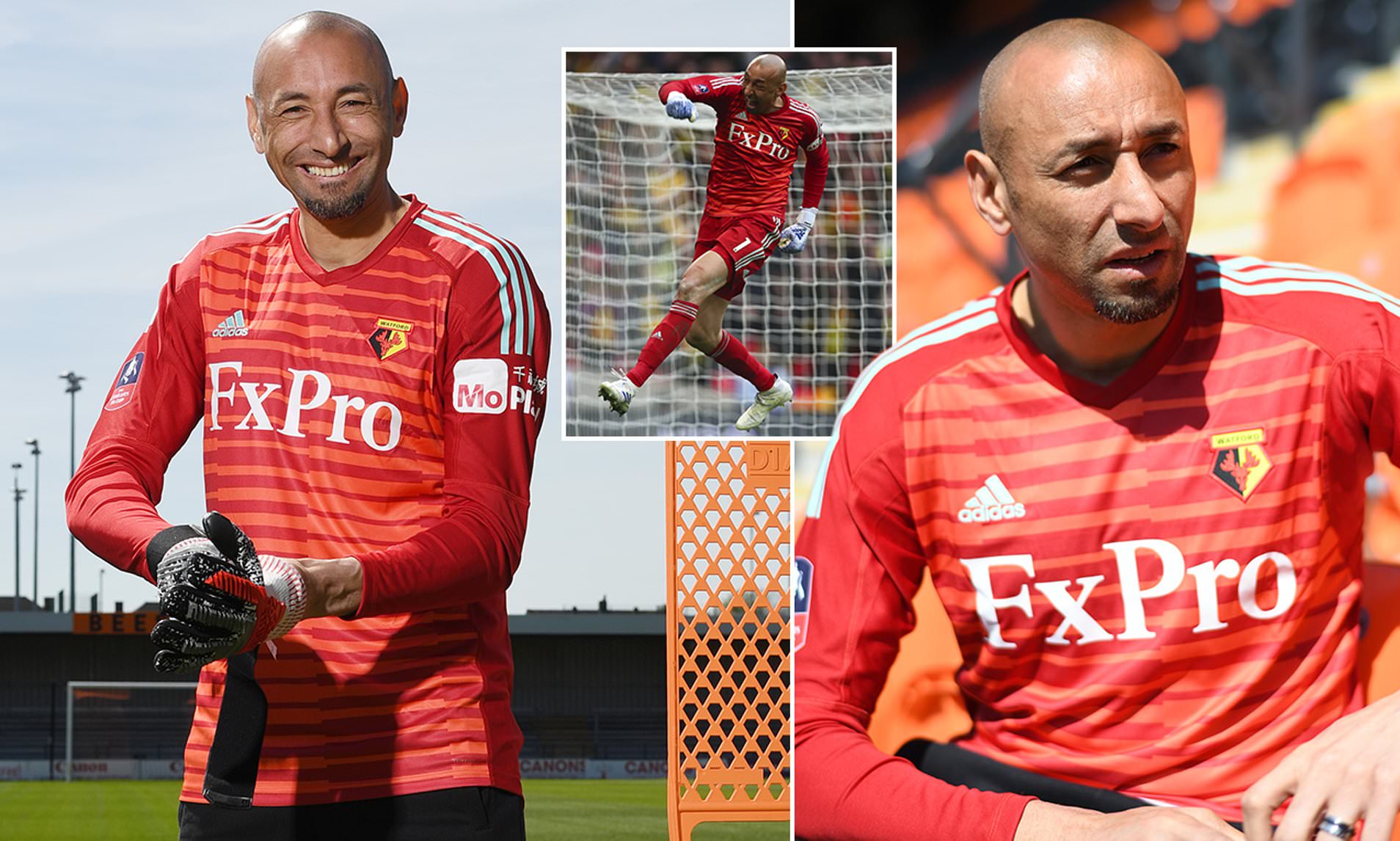 With that comes the warm laugh of a warm man whose life as a goalkeeper is ’99 per cent’ certain to end with Saturday’s FA Cup final, whether he gets the gig or not. What the 38-year-old has planned for his second life will be every bit as interesting, and possibly even more so, but first Gomes has to deal with the countdown. Not knowing. 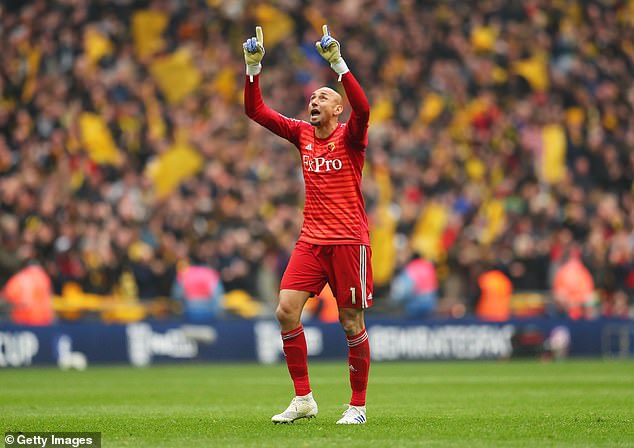 The uncertainty over whether he will start for Watford against Manchester City at Wembley, just as he started the previous five rounds, or whether Javi Gracia will go with Ben Foster, who played every minute of every Premier League game. One is the first choice, one is the romantic choice, even if we know Gomes’s capabilities, reliability and the dynamics of the modern squad make him more than that. 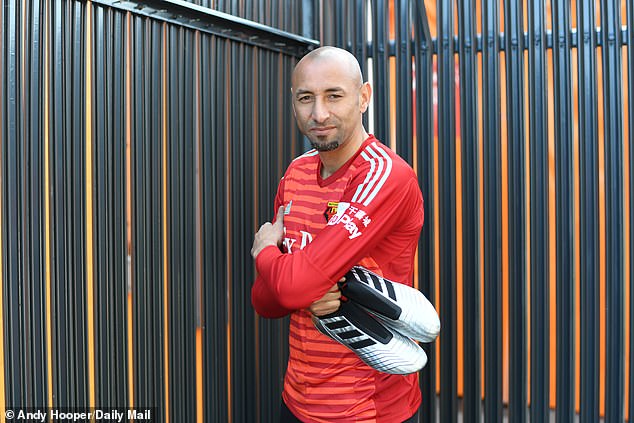 Foster himself says Gomes should start, and most neutrals with a beating heart want the same, as will a hefty chunk of Watford fans for their first final in 35 years – but then there’s Gomes himself. “People might not believe it but, really, if Ben plays I am cool with this, 100 per cent. I have been told nothing by no one about who it will be. I will probably find out in the meeting on the morning of the game and I will be cool either way,” he says. “People will think I’m just saying this but no. This is a team. I am part of it but I am not it. In my contract, it doesn’t say I must play finals or every game. If someone is ahead of me I respect it. If my job is to play in this final I will be prepared. If my job is to not play I will still be prepared to play and I will do everything I can to help Ben. That might sound like something people do not believe, but please, believe me, that is the full truth. My joy is the team’s joy. I want to help in any way I can.” He’s that kind of guy. Helping is what Gomes does. Always has done. In a basic sense, and in the parlance of football, that meant helping Cruzeiro to a league and cup double in Brazil in 2003 and helping PSV Eindhoven to four straight Eredivisie titles between 2005 and 2008. In a deeper form of the term, helping is what he has done in the 11 years in England when he has not been winning trophies. 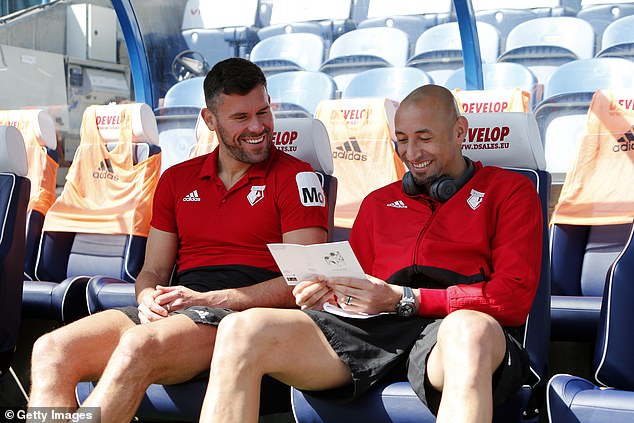 It is reasonably well known that the big friendly giant from Brazil has been a one-man welcoming committee and adjustment bureau for new arrivals from South America to his Premier League clubs. One story goes that when Sandro was left out of Harry Redknapp’s Tottenham squad for a European fixture after transferring from Corinthians, the message did not get through the language barrier and the midfielder turned up at Stansted Airport anyway. 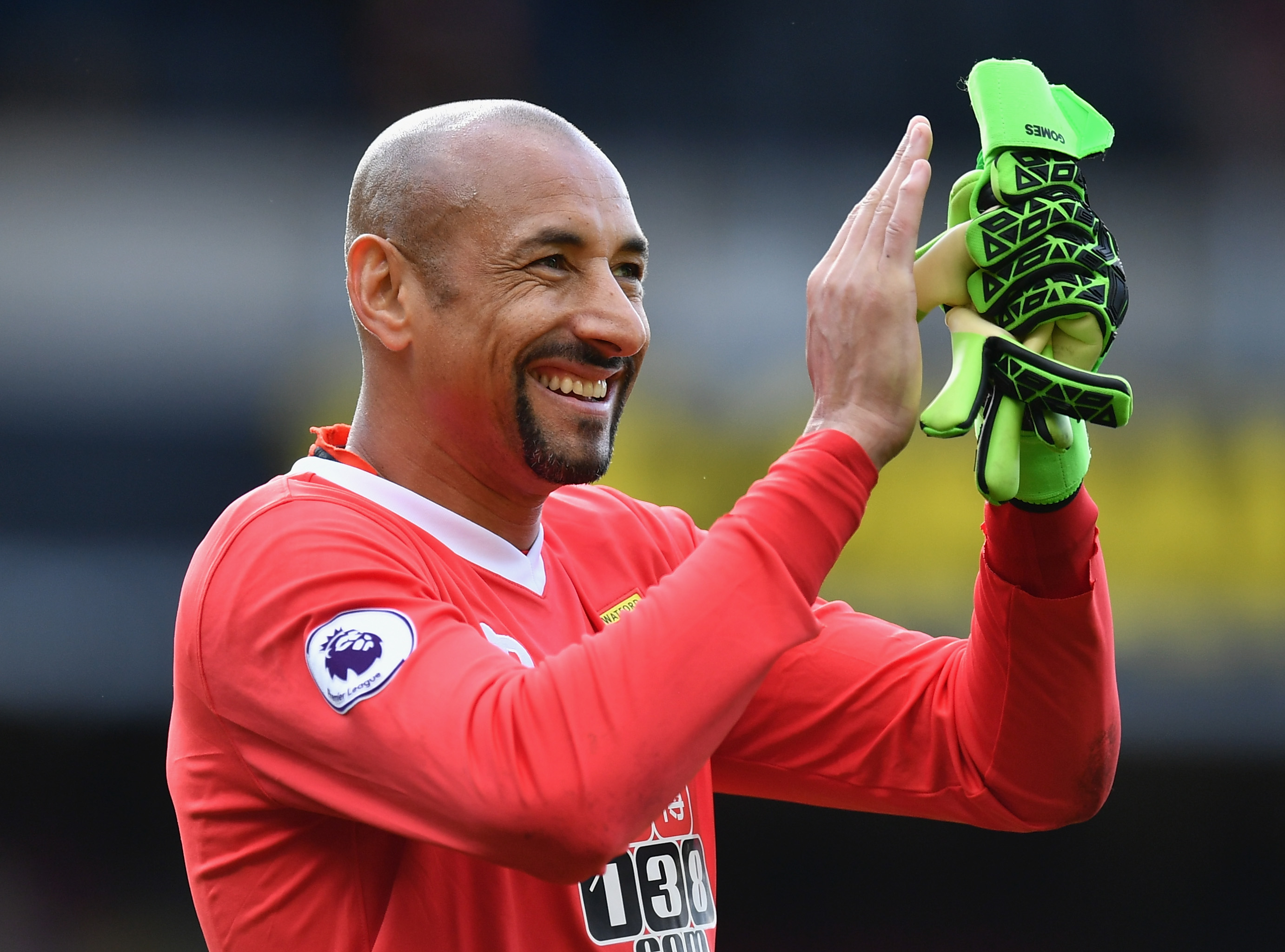 After that, it was Gomes who took Sandro under his wing, translating messages from Redknapp and inviting the younger player to his house for barbecues and flavours of home. Likewise when Richarlison rocked up at Watford from Fluminense in 2017. “He used to come to training in winter in shorts and flip flops, very cold. I took him into London so he could buy warmer clothes,” Gomes says. 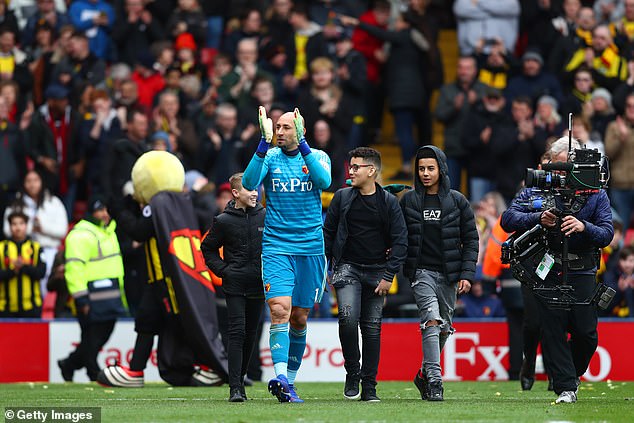 He adds: “It is important to understand that this culture over here, for a South American, is very different. They need help, especially younger players. Clubs need to know this. Even if the players are OK on the pitch, outside the pitch they need someone to embrace them, to help them. They need to feel well away from the pitch.”

The intriguing next phase of Gomes’s life will play into the theme, though it was still rather striking to hear him say recently that he plans to be both an agent and a pastor when he stops playing. The commencement of those careers is contingent on post-season discussions with Watford. Gomes says Watford is the only club he will play for at this stage and, to that end, Gracia wants to keep him for another season.

Still, Gomes claims it is ‘very likely’ he will retire — and that raises the possibility of an imminent foray into a pair of worlds that do not often meet. Gomes, an evangelical who worships at the Christian Community of London, says: “Some agents are very good and some are not. I am going to do the things that are right and good in God’s eyes. I know what players clubs in Europe are looking for and how I can help. 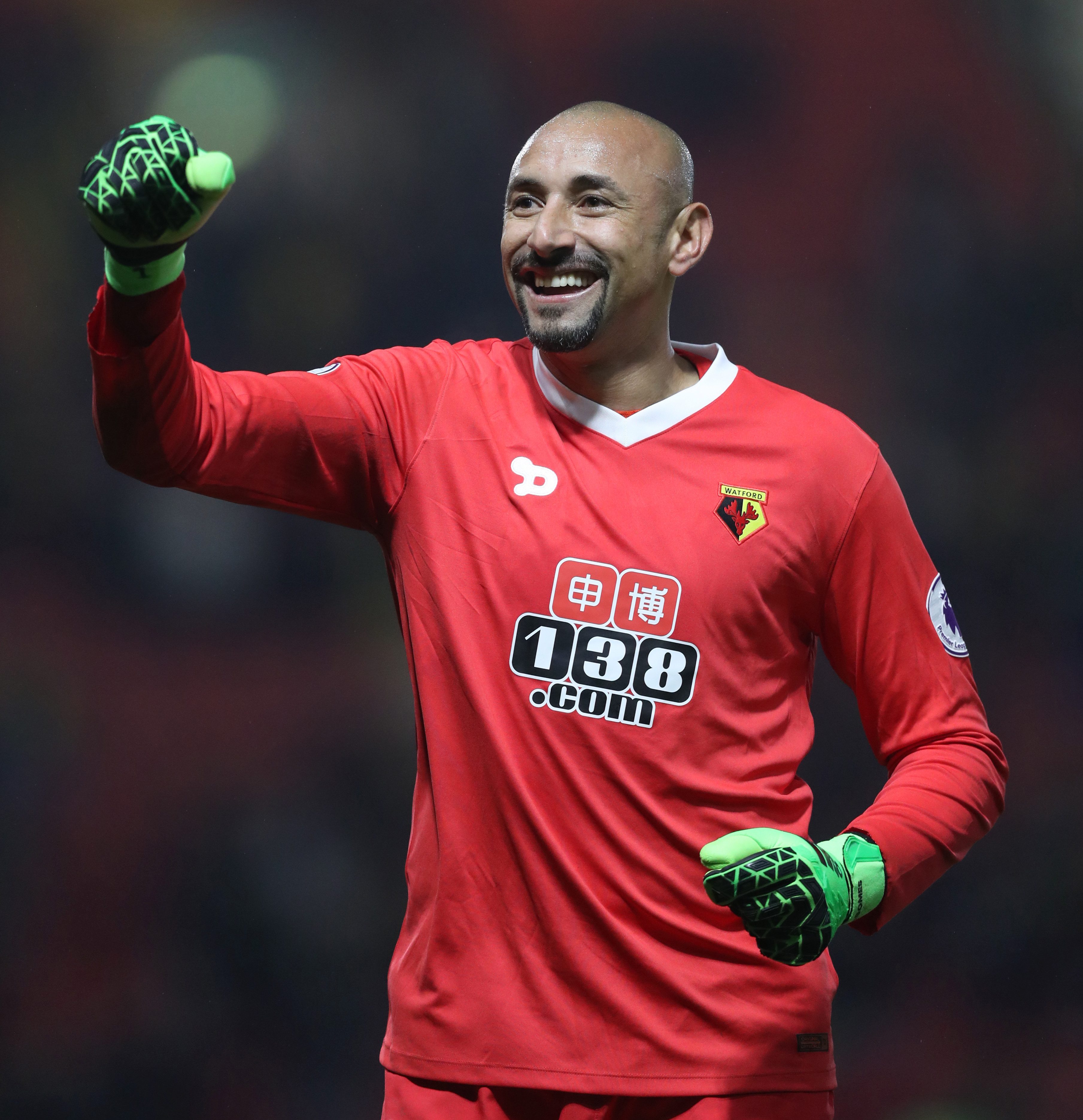 “As a pastor, it is something more recent in my heart. I got a call from God and this is becoming more strong in my heart. God will tell me where I need to go and do it, probably in Brazil because I want to be home again, but I also want to be around the world doing it. I want to help people. When God puts something in your heart, like he has for me with this, it is because the time is coming. It is the right time for me to do this. Religion has always been important for me, in my heart, in my life, but it has never been on my mind like it is at the moment. I know this is what I want to do for the next bit.” 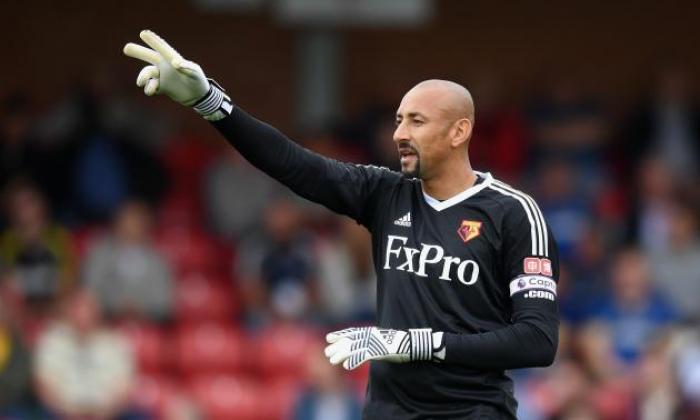 Gomes is reflecting on the previous ‘bit’ and a playing career that he expects to end in the next 48 hours. It’s been 17 years since his first professional game, 19 since he made the switch from being a centre forward to a goalkeeper, and a few more years again since he sat under a tree as a teenager with his mother and told her he would one day earn enough money to buy her a new house. Home back then, in Minas Gerais, was on an isolated farm where they had no electricity or running water. Now, as he considers his retirement, he looks back on 550 professional games, with the past 11 years split largely between Tottenham and Watford. 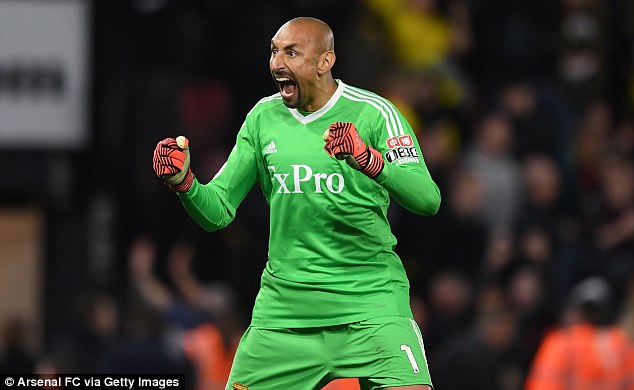 “I cannot complain about anything. All I asked God for was a house for my mother. He gave me a career,” he says. Before excelling across five seasons at Watford, Gomes had three good seasons at Tottenham and three seasons of going virtually unused. He produced some exceptional performances in that first half and was well liked, but there were just a few too many errors that caught the eye. At one point early on he was derided by Alan Hansen as one of the worst goalkeepers he had seen. “Sometimes it is good to not know the language when you come to a new country,” he says. The line is delivered with a laugh but there was difficulty in those early years in London and, more broadly, when asked for any regrets in his career, Gomes says: “I don’t think I played at my level at Spurs. I had some very good games but the average level was not what I wanted. It is something I asked myself ‘why’ about for a long time. I loved the fans there and wanted to play well for them.” It is mildly amusing in light of Tottenham’s latter-day standing as Champions League finalists that Gomes remembers being told by a member of their press team to play down his expectations in public shortly after his 2008 arrival. I had said in interviews I want to win trophies but the press staff were saying for me to calm down, that the club is only growing,’ he says. ‘It was a very good club then and look at them now. Huge.” 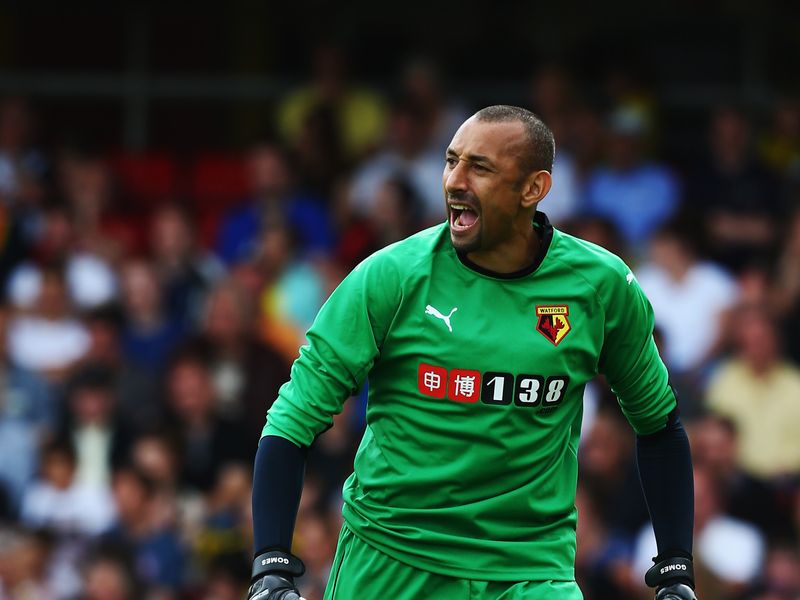 He left for Watford in 2014 after rejecting a new contract to be a back-up goalkeeper and what has played out has been a marvellous late-career resurgence, with a promotion from the Championship in 2015, a player of the year gong in 2016 and a consistent demonstration of his best form. He has been a constant presence through seven managerial changes and an excellent goalkeeper, one of their best signings of recent seasons. 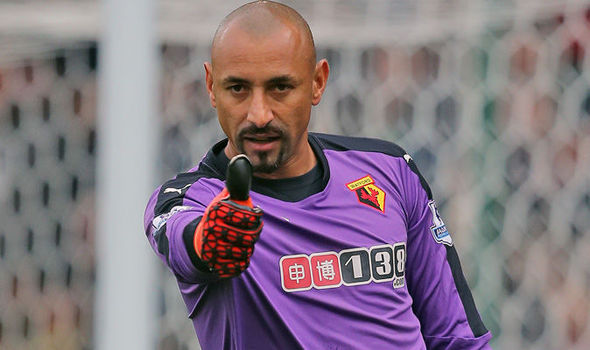 His role has been downgraded since Foster arrived last summer, but there has been no trace of a grumble. Club staff talk about a player who has trained hard nonetheless, taken his chances with four clean sheets in seven games across the cups and consistently supported Foster. That’s not always an easy attitude to take from the halfway house of being the cup keeper, a spot in which you are neither first choice nor unwanted. In most cases, that role doesn’t amount to much for a player pushing 40, but for Gomes, it might yet produce one of the all-time great farewells.