We find love in strange places, this is true for a man who took to social media platform to share an incredible story on how he met his wife in a cemetery. The man who identified as Sixthformpoet, recounted how he had mistakenly dropped flowers for  a man who had  killed his wife and her grandparents only to discover what he did and went over to the deceased woman grave to apologize then he came across a woman who’d later become his wife. In his own words, 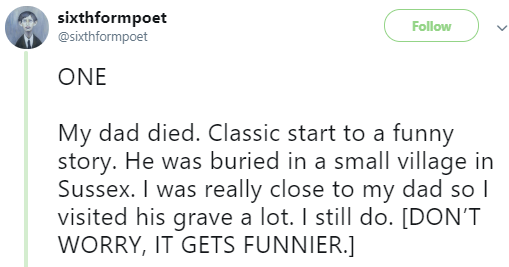 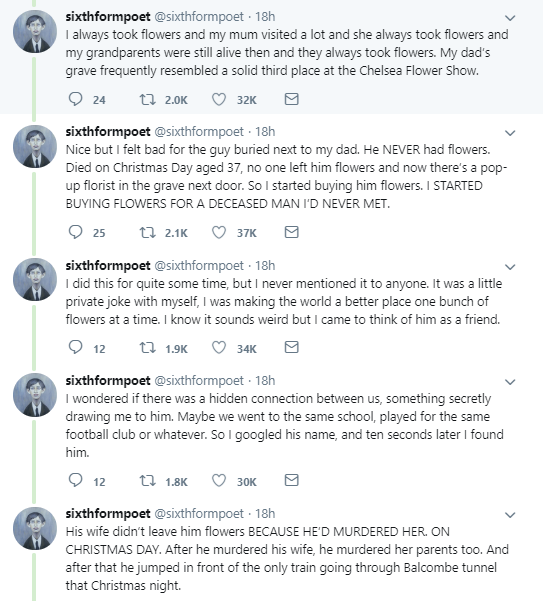 ”Nice but i felt bad for the guy buried next to my dad. He never had flowers . Died on Christmas Day aged 37, no one left him flowers and now there’s a pop up florist in the grave next door. So i started buying him flowers. I started buying flowers for a deceased man I’d never met.”

”I did this for quite sometime but i never mentioned it to anyone. it was a little private joke with myself, i was making the world a better place one bunch of flowers at a time. I know it sounds weird but i came to think of him as a friend. I wondered if there was a hidden connections between us, something secretly drawing me to him. Maybe we went to the same school, played for the same football club or whatever. So i goggled his name, and ten seconds later i found him.” ”I felt terrible for his wife and her parents. Now, i wasn’t going to leave them flowers every couple of week for two and a half years but i did feel like i owed them some sort of apology.  I found out where they were buried,bought flowers and drove to the cemetery. As i was standing at their graves mumbling apologies, a woman appeared behind me. She wanted to know who i was and why i was leaving flowers for her aunt and grand parents. Awkward.”

”I explained and she said ok that’s weird but quite sweet. I said thanks, yes it is a bit weird and oh god i asked her out for a drink. Incredibly, she said tes, two years later she said yes again when i asked her to marry me because that is how i met my wife.”