Waist beads are often worn by African women and it holds certain fascination for many. The beautiful stream of color blending could be one of the reasons for this fascination or the way a woman’s lower body moves when this ornament is worn could be another. 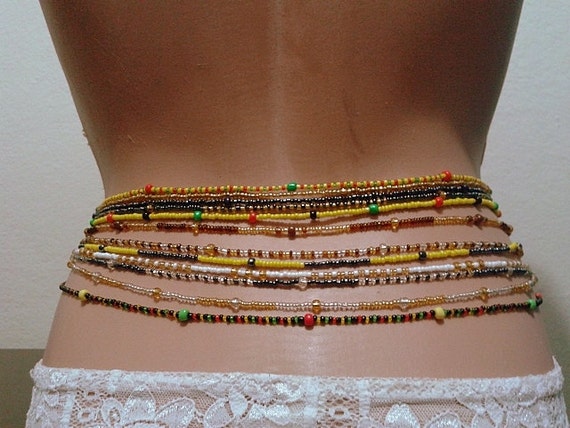 It has been named according to the tribes wearing them. In northern Nigeria, it is called ‘Jigida’ while the Yorubas refer to it as ‘Bebedi’. Women’s sexuality in Africa as a whole is attached to a woman’s bum and the beads help women sway and show off this feature. Although much sentiment is attached to the use of this ornament, some ladies don’t mind wearing them. This present day generation doesn’t see the need to wear beads around the waist in order to make the bum shake; they would rather ‘twerk’ and shake the bum harder than those wearing the waist beads. The wearing of beads is thought to be obscene, local and primitive. Most parents wouldn’t allow their young ones wear them. It is seen as something dirty which is meant for ladies or children with no moral upbringing. It is believed that whoever wears them is wayward and is trying desperately to attract men with it. This misconception has not discouraged the true lovers of waist beads. They hold special admiration for it.

Feminism and beauty is enhanced with the wearing of waist beads. Young girls wear waist beads to show they are growing into young beautiful women that are ready for marriage. As interesting as the culture of bead wearing is, it also has some issues of spirituality attached to it. Waist beads are believed by many to have been dipped and soaked in some remedies to entice, charm and trap men. In the past, charmed beads were worn to protect women against certain forces that may be radiating negative energy around them. In pregnancy, it is believed to be a protector of the unborn baby and the mother. Charmed beads also help the women improve their sexual prowess while acting as some sort of birth control. This issue of spirituality attached to the bead is a major turn off for some men who believe they may never be able to get out of the claws of a woman wearing them once they are trapped.