Some days ago, Regina Daniels took to her page to announce the wrap on the shooting of her first movie after her official marriage to Ned Nwoko. The movie which was produced by her mother, Rita Daniels, boasts of top Nollywood actors like Desmond Elliot, Bolanle Ninalowo, Sola Sobowale, amongst others. Recall that on Thursday, June 13, 2019, she took to her Instagram page to announce a new movie, The Enemy I know’ in which she would be acting in. The beautiful actress shared a picture of some of the cast fully attired in black, and captioned it: “Finally Issa wrap on #theenemyiknow @theenemyiknow  Director: @ozziefied_film  Producer: @rita.daniels06  Cinematographer: @gentletouch66”.

Check out the screenshot below.

Regina Daniels, who has been making smooth waves since her marriage to Ned Nwoko, has now taken another step as she would be featuring in Comedian AY’s movie, ‘Merry Men 2’. Regina took to her page to post pictures which are obviously from the shoot of the movie and captioned it: “I don’t follow rules, I make them and when necessary, I break them……#merrymen2 @aycomedian. Meet Kenya in merrymen 2″.

Check out the pictures below.

Regina Daniels has shown she is not slowing down anytime soon. Recall that it was reported that Nollywood actress and billionaire wife, Regina Daniels has been appointed as the Youth Ambassador of the Super Eagles Supporters Club. The appointment, which came ahead of the commencement of the 2019 edition of the African Cup of Nations (AFCON) Tournament in Egypt, was conveyed through a letter signed by the National President of the supporters club, Mr Vincent Okumagba.

According to the letter, Princess Regina Daniels Ned Nwoko was chosen for the prestigious soccer ambassadorial appointment due to her motivational endeavours and passion shown over the years. The supporters club cited one of the endeavours as the recent Regina Daniels Children’s Carnival which was staged in Agbor, Delta state and attracted thousands of people particularly children and youth. 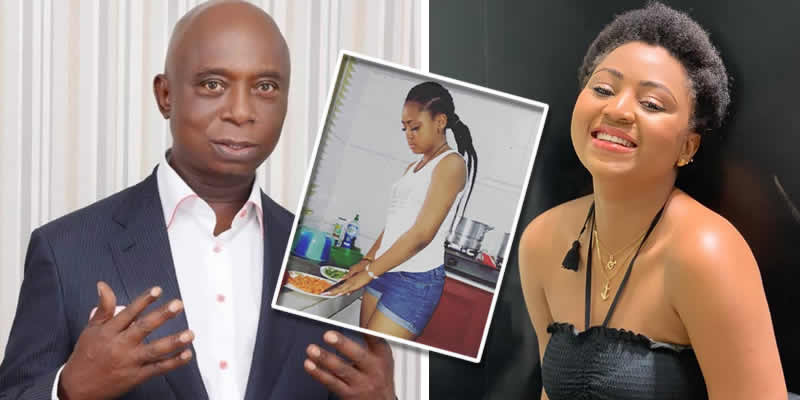 It is noteworthy that Regina’s husband, Prince (Dr) Ned Nwoko, the Senator-elect for Delta North is a veritable pillar of sports in the country. He is also the Chancellor of the proposed Stars University, Delta State, a pioneer tertiary institution that would combine comprehensive sports development and academic pursuits. The beautiful actress has shown she is not leaving the Nigerian entertainment scene anytime soon. As Nigerians who are very concerned about the affairs of the beautiful Regina, we are wondering what her next step would be. Please share your thoughts on this with us in the comment section.