Check Out Nollywood Actors Who Got Married To Their Co-Stars

Marriage, also called matrimony or wedlock, is a socially or ritually recognised union between spouses that establishes rights and obligations between those spouses, as well as between them and any resulting biological or adopted children and affinity (in-laws and other family through marriage). In Nigeria not all Industry or Company would allow couple to work together but when it comes to Nollywood Industry that those not work.With all the odds attached to couple working together in same Industry some Nollywood celebrities have been able to surpass it and they are happily married and also enjoying their relationship and making cool cash together in the same Industry.When it comes to weddings, you might be familiar with the phrase “till death do us part.” But not every couple is cut out to make it that far. In the celebrity world, we’ve gone over all kinds of marriages — celebrities who eloped, celebrities who married young, and even the celebrity marriages you totally forgot about. Now, it’s time to talk about the Nollywood actors who got married to their co-stars: Speak of a successful marriage, speak of Olu Jacobs and Joke Silva”. These two Nollywood veterans have been married for over 30 years. They have been able to weather the storms and their marriage would easily pass as a template for new couples in the industry.

Banky W and Adesua are lovely couple who got married after appearing in a movie together titled The Wedding Party. While the couple’s marriage is still fairly young, it is arguably the most celebrated in the Nigerian entertainment industry today. 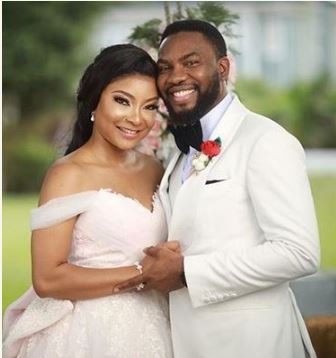 Ibrahim and Linda both appeared in the TV Series Tinsel and since they have been friends and last year they both tied the knot. Although, their marriage is still only about some months old, it shows a lot of promise. We wish the power couple a blissful married life.

Despite Adeniyi marriage crash with Toyin Abraham, the actor has moved on and he is happily married to Seyi Edun who is also an actress. When it comes to Yoruba Movies, Adeniyi Johnson and Seyi Edun are no new faces, they have both featured in several movies together.

Against all odds between Funke Akindele And JJC, they have both stand out strong and they are happily married blessed with twins and also they are one of most celebrated couples in the country.
When it comes to Successful marriages in the movie industry they are hard to come by these days, because it is always tough for actors to stay committed and moreover their is common believe that says “celebrity marriages don’t last”, With this list we have proving to you all that Celebrity Marriages Last.