BamBam of the Big Brother Naija fame is giving us a sneak-peek of what her boyfriend, Teddy A is enjoying with her new photos. The 29-year old rocked bump shorts as she sat seductively on a cupboard in a kitchen with her products displayed around her. 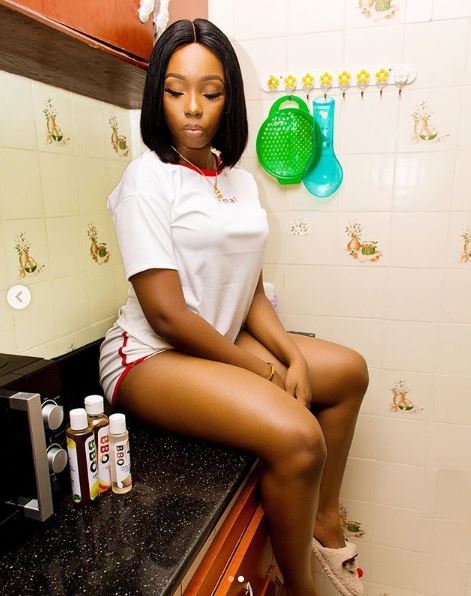 She went on to reveal that the secret of her beauty and clean skin is the beauty oil. BamBam who was caught having s*x with Teddy A during the reality show in South Africa has been involved in acting, singing, modeling and branding activities.

Oluwabamike (bambam) olawunmi is a multi talented former BBNaija housemate. She is an actress, broadcaster, Singer, Voice over artiste, event host, Creative Director, and On Air Personality. Bambam is an MTN Project Fame season 8 semifinalist. She plays Toby in BBC radiodrama. She is a church worker at Revival House Of Glory International Church.

Bambam is best remembered for her “showmance” with the self acclaimed “alpha male”, Teddy A. She even played a romantic role with Teddy in a movie. Bambam claims to have sold out 25 million Naira worth of her beauty oil, just hours after launch.

Bambam was born in 1990 in Ogun State. Her parents are divorced. Nevertheless, She attended film school as a means of overcoming her parents divorce.

Bamike is a graduate of Microbiology from Bells University of Technology, Ota, Ogun State. She was a notable student leader while in school.

Oluwabamike is an actress and singer. Before bbnaija, she worked as a marketing management staff at Hausba Experience. She has starred in a number of movies. Among them is The Train. She also has a musical single to her credit. It is a gospel music which she calls “Rest”.

Oluwabamike “Bambam” Olawunmi claims to have joined the house without the knowledge of her family. BamBam’s “spirit-animal” is the black panther because it has “good massage skills”.

When asked – What irritates her the most about other people in brief:Dishonesty.
Also, What she brings into the BB House: I’ll bring drama and entertainment and my charm.
Finally, What she will do with the prize money: I’ll pay my tithes and invest in a few businesses

#Bambam stuns in new outfit2Teddy A